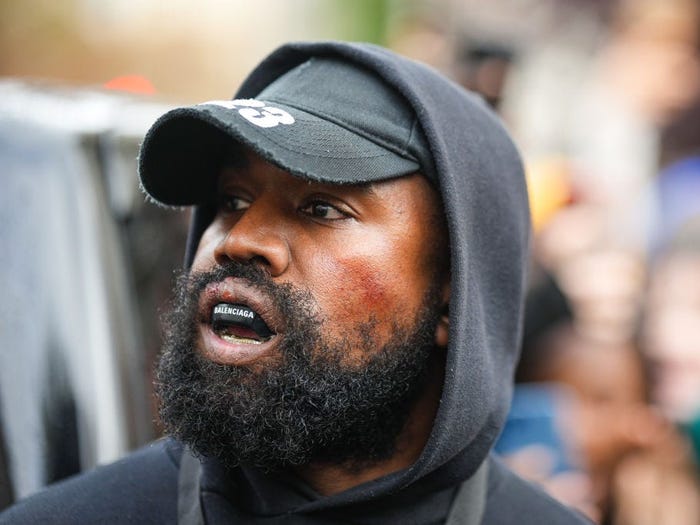 Kanye West is an insane, bipolar, manic depressive, anti-Semite.  His comments up to this point have been inexcusable, but he really went over the top in his appearance on Info Wars on Thursday.  Donald Trump has had a connection with Kanye West for years now, but he must sever that connection immediately if he has any chances.  That being said, no one should allow themselves to be lectured by anyone on the Left, who have no leg to stand on regarding anti-Semitism.

Kanye West literally said on Alex Jones’ show, “I like Hitler…I’m not trying to be shocking, I like Hitler. The Holocaust is not what happened, let’s look at the facts of that and Hitler has a lot of redeeming qualities.”  He followed this up with proclamations about Jesus, and loving everyone, and pictures of a swastika inside a Star of David.  The man is clearly unwell, and no media outlet, no matter how large or small, should give him a platform.

Donald Trump has a few key flaws regarding this story.  First, he values loyalty to his own detriment and likes people who flatter him.  This is why he can threaten to nuke Kim Jong Un and then exchange love letters with him.  Second, he has no capacity to admit that he made a mistake.  These qualities actually helped him great in 2016 and during his term as President.  The same qualities were tiring in 2020, though, and running up to 2024 they may end his political life.

The media has been desperately trying to tie Kanye and Trump together, with outlets like Vanity Fair proclaiming the headline, “Kanye West, Donald Trump’s Dining Companion, Tells Alex Jones, “I’m A Nazi,” Lists Things He Loves About Hitler.”  Kanye West has been one of the world’s most famous musical acts for the past 2 decades, but now he’s just “Trump’s Dining Companion.”  The Washington Post’s picture about the Alex Jone story was Kanye West, wearing a MAGA hat, clasping hands with Donald Trump. Because of Trump’s flaws, he will likely not outright blast Kanye West, instead opting to “disavow” when asked and never really mentioning West again.  This is a weak response, and Trump needs to be stronger when calling out West, and anyone associated with him.

All that being said, the Democrats who are trying to tie Republicans to West’s comments should kindly shut their mouths.  While the Right did embrace West (albeit foolishly, even at the time) when he proclaimed his Christian faith and declared himself to be pro-Life, they disowned and excommunicated him once he revealed his true feelings.  Same happened with elected representatives like Steve King.  The Left, however, embraces their racists and anti-Semites well after they reveal themselves to be so.

The most obvious and prominent examples are Louis Farrakhan, Linda Sarsour, Ilhan Omar, and Al Sharpton.  Farrakhan was photographed with Barack Obama in 2005, and was hugged warmly by Maxine Waters in 2018.  Farrakhan has close ties to Keith Ellison, who was at one point the Deputy Chairperson of the Democratic National Committee.  Linda Sarsour regularly appears with Elizabeth Warren and Bernie Sanders, speaking at events and rallies together with them where she spouts her anti-Semitism.  Al Sharpton has a primetime show on MSNBC, and was a visitor of the Obama White House at least 80 times.  When Ilhan Omar continually made anti-Smeitic statements, Democrats watered down their official “rebuke” of her to the point where she, herself, voted for it.

Then there’s the connection that the Democratic Party has with the Black Lives Matter movement, which was founded by anti-Semitic marxists, and the Women’s March, which was also founded by anti-Semitic Marxists.  Patrisse Cullors of BLM explicitly endorses the economic destruction of the Jewish State, or BDS.  Marc Lamont Hill, formerly of CNN and a professor at Temple University, specifically ended a speech to the UN with “Free Palestine, from the river to the sea,” to applause. (To their credit, CNN fired him over that statement). Since no Palestinian state would allow for Jews to live there, this is calling for a Second Holocaust.  Ignorance would not be an excuse there just like it wouldn’t be one if you ended a speech with “Heil Hitler.”  Hill also said that BLM seeks to “dismantle the Zionist Project,” speaking, of course, about the one Jewish state.

As the Democrats move further and further to the left, they should be aware of who their strongest base of support is, the Democratic Socialist of America. The DSA boasts at least 4 members of the House of Representatives, including Alexandria Ocasio Cortez, Cori Bush, Rashida Tlaib, and Jamaal Bowman, as well has many more in state and local governments.  DSA also overwhelmingly supported the BDS movement at their convention in 2017, and after passage of the resolution, chanted “from the river to the sea, Palestine will be free.”

This is merely a sampling of the anti-Semites that infuse the Democratic Party at its core.  This doesn’t take into account other Leftwing parties around the world, specifically the Labour Party in the U.K., where the anti-semitism was so prevalent it forced multiple resignations.

This is not to say that Democrats should not call out anti-Semitism, they absolutely must.  But the idea that they would lecture anyone about anti-Smeitism in their own ranks is laughable.  No one should take them seriously, and no one should care.  Republicans are the only ones who can police these issues within their own ranks.  Democrats have zero credibility to do so.