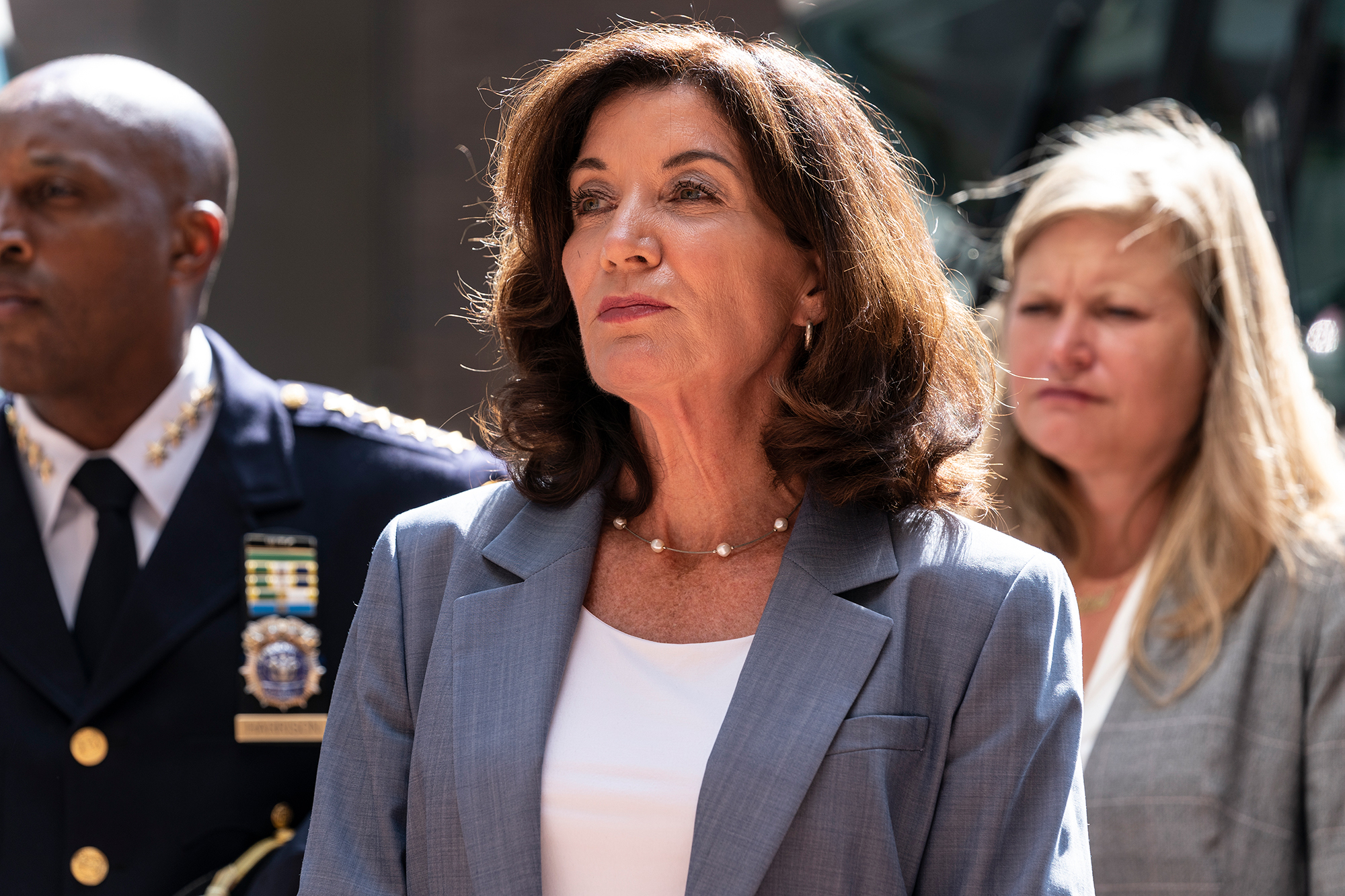 As leftwing and blue as New York is, New Yorkers could always look towards other states and say, “well, at least we’re not that crazy!”  That excuse has been dwindling since 2019, though, when Democrats finally took over the last barrier for legislative dominance when they won a majority in the State Senate.  The radical agenda hit New York with a force, and Kathy Hochul is running to be even more extreme.

Hochul’s main focus is a single issue: abortion.  She tweets pro-abortion messages daily, and every attack on Congressman Lee Zeldin is abortion-centric.  To hear Hochul say it, New York – the state with absolutely zero restrictions on abortion – is on the verge of becoming a theocracy ruled by Handmaid’s Tale-esque religious zealots. But as much as any pro-lifer may want some restrictions on abortion – even a European standard would be welcome – there is no chance that this will happen.  Even if Zeldin does win, and the Republicans take the State Senate, the Legislature would still have to pass a bill through the Assembly, which will not overturn any abortion law.  Essentially, Hochul is running on fear of a bogeyman who doesn’t exist.

It’s essentially a non-issue for the Zeldin team.  Speaking to a Business Council convention, Zeldin said, “If you were trying to really get to the heart of why I’m even in this race, it’s because of the economy and crime above all else.”  The real issues facing New York is not abortion – it’s not even in the top 10.  Zeldin added, «I›m not standing here today at the Business Council of New York for anything that has anything to do with abortion. It has everything to do with making the life of our economy ripping.»

Hochul has been enjoying her Empress role since she was elevated to it when Andrew Cuomo resigned.  She kept her COVID emergency powers far longer than nearly any other Governor in the country, using it to help her political donors at the expense of the taxpayers by awarding a contract that had the state pay double for COVID tests.  She rammed through a vaccine mandate that forced healthcare providers to resign, causing a massive shortage in the medical field.  She refused to do anything about the soaring crime in the state, and has allowed the no-cash-bail system to let criminals run rampant in the cities.  Now she’s pushing a regulation on automobiles which is sure to cripple consumers and the power grid.

From a statement on the Governor’s website: “Governor Kathy Hochul today commemorated National Drive Electric Week by directing the State Department of Environmental Conservation to take major regulatory action that will require all new passenger cars, pickup trucks, and SUVs sold in New York State to be zero emissions by 2035.”  No act of legislature, no comment from the public – just a simple regulation that cripples 20 million New Yorkers.

A few weeks ago, California did the same thing.  Without an act of the legislature, Gavin Newsom mandated that no new gas-powered cars would be sold in California.  Days later, the energy grid was so depleted that California actually told people to not charge their electric cars.  New York, which also inexplicably believes that solar and wind can legitimately replace fossil fuels as an energy source (it can’t), could be on the verge of similar problems.  Rolling brownouts and blackouts could become the norm in New York if Hochul has her way.

California has decided that its homeless problem is of zero concern, leading to tent cities lining the highways in Los Angeles and San Francisco.  Needles and human waste can be seen on every block. New York City is not that far behind, with the stench of fecal matter and marijuana present from the moment you step out of Penn Station.  Lunatics are beating women in subway platforms and on the street. The latest victim was a 61-year old EMT, six months away from retirement, stabbed in Queens.  Tents are being erected to house illegal migrants, with Eric Adams making a deal with Norwegian Cruise Lines to house people in the harbor until they figure out what to do with them.  The policies that Hochul supports has led to over 2 million illegal border crossings in the past year.

Then there is the increasing issue on parental rights, an issue that the Left is demurring on.  Hochul claims that Zeldin will bring “don’t say gay” to New York.  What she is really concerned about is a push for parents to have a say in what their kids learn in school, especially if the education system diverges from the curriculum and ventures into topics promoting the LGBT agenda.  Chris Rufo, an investigative reporter, just revealed a form that kids fill out in grades K-5 in San Francisco where they ask kids what name and pronoun they want to be called in class versus when speaking to their parents.  The idea is that parents should be cut out of the loop regarding their own children because parents are the enemy, and the real friends of the children are the teachers and the government.  Hochul agrees with this, and a bill that turns New York into a “trans refuge state,” a state that encourages minors to escape to, is in the Assembly.  The other states to do this are Minnesota and, of course, California.  For Hochul, parents are the enemy.

Hochul targets the religious community as well.  While she boasts about raising Progress Pride flags at the state capitol for the first time, Yeshiva University is desperately trying to remain a Jewish institution that can abide by Jewish law.  Synagogues in Brooklyn and Rockland county just filed suit against Hochul over the new gun law she pushed, which designated Houses of Worship as “sensitive areas,” turning them into gun-free zones.  She is telling religious groups that they cannot exercise their Second Amendment rights because they are exercising their religious rights.  This is blatantly unconstitutional.  Meanwhile, her Department of Education has been trying to crack down on Jewish education – all Jewish education, not just Hasidim.  While other states are working to help their non-public school students (most notably Arizona), New York continues to punish them.

Hochul must be defeated in November.  This is no longer a political preference; it is a necessity to preserve New York State.  New York has seen the second-most net reduction in population, after California, as people flee the state and its policies in droves for the freer pastures of Florida and Texas.  If Hochul wins in 2022, New York may be unsalvageable for a generation. We have an opportunity, like New York City in the early 1990s or Virginia in 2021, to turn this around.  There must be massive turnout to elect Lee Zeldin.  If not, start looking into Florida real estate.