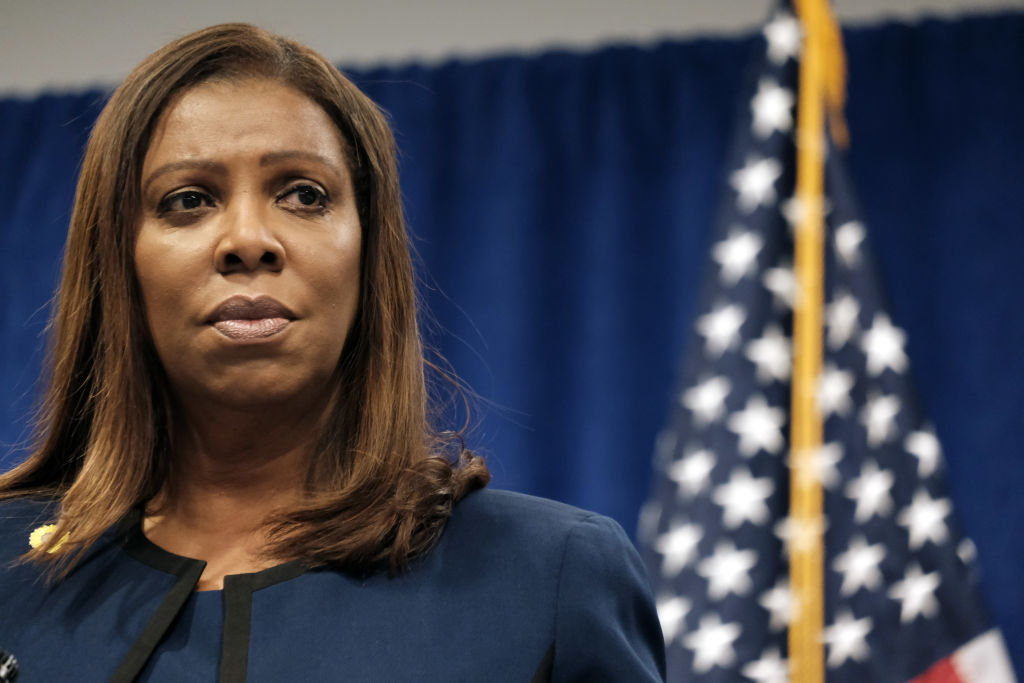 A hatchet-wielding maniac viciously and repeatedly demolished a McDonald’s in New York City – and was released on his own recognizance within hours.  The New York Post has found 10 career criminals who racked up 485 arrests between them since the cash bail law was enacted, with most of them still out on the streets. Crime has skyrocketed, people are scared, and New York State is headed back to the crime waves of the 1970s and 1980s.

Where is Attorney General Letitia James? She’s out persecuting a personal vendetta against Donald Trump for the sole purpose of using Trump’s unpopularity in New York to propel her to re-election.

James is currently the only statewide candidate to be down in the polls to her challenger, Michael Henry.  A Trafalgar Group poll has Henry edging out James 44.2 to 43, with 12.8% undecided.  Voters are scared of the crime increasing in their neighborhoods, and James clearly has other priorities.

James is on a crusade to take down Trump, and has been for years. It’s well documented that James initially ran for Attorney General on the promise of suing Trump, embodying the Communist philosophy of “Show me the man, and I’ll show you the crime.” Prior to her election, she said, “what is fueling this campaign, what is fueling my soul right now, is Trump and his abuses, abuses against immigrants, against women, against our environment.” No word of a crime he committed – just a feeling of generic “abuses.” She also explicitly said that the law was her weapon. “As the next attorney general, I see the law as a sword and as a shield to protect those who are vulnerable, because no one is above the law, including this illegitimate president. And so, I look forward to going into the office of attorney general every day, suing him, defending your rights and then going home.” (Note that James referred to Trump as an “illegitimate president” in 2018, something she would call an “assault on our democracy” if said about Biden.)

So, after three-and-a-half years of investigations, she’s suing Trump in civil court. Not criminal court, civil court.  Not for abuses against immigrants, women, the environment, or any other fictitious crime, but for vague business practices. And she’s out for blood.

“Today,” she wrote on Twitter, “I filed a lawsuit against Donald Trump for engaging in years of financial fraud to enrich himself, his family, and the Trump Organization. There aren’t two sets of laws for people in this nation: former presidents must be held to the same standards as everyday Americans.”  Well, there clearly are two sets of laws, because James is specifically targeting Trump because he’s a Republican.  She’s targeting Ivanka, Eric, and Don Jr. because they are associated with her political enemy.  Hundreds of acts of violence are forgiven by James if the suspect possesses the proper intersectional qualities, but don’t dare be anywhere to the right of Stalin politically.

James outlined what she’s looking to accomplish: Make Trump pay $250 million, ban him from running businesses in New York, ban his company from buying property in New York for five years, and make a criminal referral to the DOJ. What is the alleged “crime”?  The suit claims that his properties are overvalued. That’s it.

If this weren’t so serious it would be laughable.  The fantasy of “getting Trump” has been the fever dream of many Democrats before Letitia James, and will continue to plague many who come after her. Russia-collusion, Mueller report, Ukraine phone call, COVID, January 6, and many other so-called “scandals” were all meant to be the silver bullet against the former president.  Now James thinks that the thing that will finally take Trump down is the subjective world of real estate valuation?

As former Attorney General Bill Barr told Fox News, James is overreaching here.  Barr, who has been vocally critical of Trump after the events of the 2020 election, said, “Well, for one thing, she brought this as a civil case. This is not a criminal case. To me, that says that she doesn’t have the evidence to make a criminal case. So she’s setting a lower bar and bringing this civil case. I don’t think it’s going to go any further.”

Barr continues: “Now, it’s over 200 pages long with a lot of details about the valuation of properties. But the fact of the matter is that real estate valuation of a complex real estate company like this is inherently very subjective. It depends what kinds of assumptions are used. Values can swing, depending on whether it’s viewed as a property that’s going to be split up or one that’s kept together and so forth. So it’s not an exact science. And the fact is that banks, sophisticated banks, don’t rely on every jot and tittle in the financial statements. They do their own assessments. They make themselves comfortable. Sometimes, they automatically discount that kind of submission. And they didn’t — no one — the loans were paid back. These were successful investments.”

“And the banks were paid back,” Barr concluded. “So, to have spent three years on this, seems to me, her trying to make good on a campaign promise that she was going to bring Trump down.”

Trump critics and James supporters won’t look at Barr’s words – on Fox News no less – as gospel.  But any New Yorker who’s been looking around their state should view these actions and wonder if James, or any other elected Democrat, is up for the job of running New York. The final pitch before the 2022 election is…Trump? Trump, who’s not on the ballot?  Trump, who’s obsolete in our state?  Voters should not be worried about Trump.  They should be worried about James, and Kathy Hochul, and Chuck Schumer, and the Democrats on the ballot who have led the state on the primrose path to devastation. When entering the voting booth, if a voter chooses to go with the Democrats because they hate Trump, they are inviting pain upon themselves.