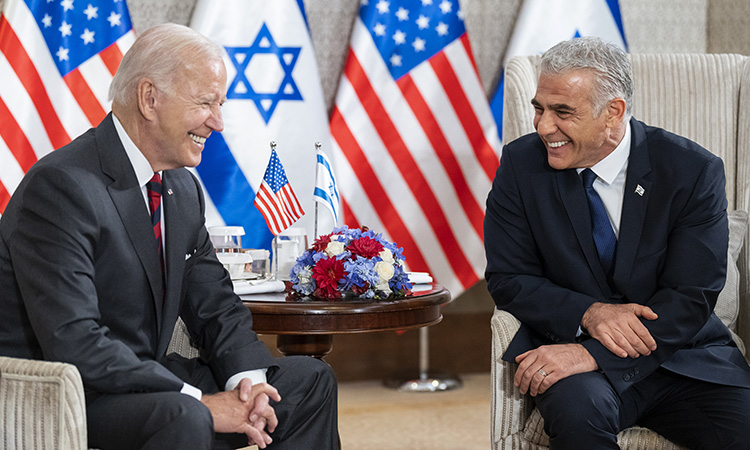 President Joe Biden returned from his trip to the Middle East, and for those who are skeptical at Biden’s ability to get through a normal day without breaking the country too much, there was a lot of bated breath.  Would he open a Palestinian consulate in East Jerusalem?  Would he harm the relationship with Saudi Arabia?  Would he push concessions on Israel?  With Biden, and his abysmal foreign policy track record, anything was possible.  So it was a sigh of relief when his trip essentially accomplished nothing.  At this point, doing nothing is a win.

Biden did do a few nice things while he was in the Middle East.  He was incredibly respectful towards Holocaust survivors; that was a nice moment.  He attended the opening ceremonies of the Maccabiah Games, the first sitting US President to do so.  He took some nice photos, shook some hands, and pounded some fists (more on that later).  That was the positive of the trip.

Then there were the classic Biden blunders. Nobody who pays attention believes that Biden has the ability to get through a paragraph without messing up (“Repeat the line”).  He inadvertently said “honor of the Holocaust” instead of “horror of the Holocaust.”  He only called on reporters from a pre-approved script.  Most importantly, he was relatively weak on Iran – yet that is better than capitulating to Iran.

This is how low the bar is for Joe Biden.  He can say something as egregious as “honor of the Holocaust,” and even the most hardcore Republicans will merely shrug and acknowledge that he’s said far worse.  He can get pre-approved questions from the media and the reaction is “at least he doesn’t have a note card that gives him instructions.”  He can be schooled by an interim Israeli Prime Minister about how to handle Iran and those who are in the blast radius of the Shiite despot can give a smattering of applause.  Hey, at least he didn’t send them pallets of cash this time.

Two years ago, Israel signed four peace treaties with Arab nations – twice the number they signed in the previous 72 years.  Iran was kowtowed, ISIS was destroyed, Afghanistan was stable, and Hamas was on the ropes.  That was all because President Trump did not follow the broken path laid out by foreign policy “experts” that preceded him.  Within 17 months, Biden has subjected tens of millions of Afghans to the horrors of the Taliban, refunded UNRWA, ignored the Taylor Force Act, and tried to appease the Iranians.  So no one knew what could happen when Biden made his way through the Middle East.

Biden did split the baby with his anti-Israel base.  While he did proclaim that Israel is not an Apartheid State – something that an increasing number of Democrats believe – he also removed Israeli flags from his motorcade when entering East Jerusalem.  He also foolishly proclaimed that he supports a two-state solution with land swaps, a division of Jerusalem, and pre-1967 borders.  Mr. President, the ‘90s called and wants its foreign policy back.

In addition, Biden pledged $200 million to UNRWA, the slush fund for Palestinian terrorism created by the United Nations with the express mandate to resettle the Palestinian refugees after the 1948 War. Seventy-four years and four generations later, they are still on the job, so another $200 million is sure to get them over the finish line.

Then Biden made his way to Saudi Arabia, where he fist-bumped Mohammed bin Salman Al Saud (MBS), the Crown Prince.  He had to do so because of another failure of Joe Biden’s early in the trip.  For weeks, there was speculation on how Biden would greet MBS.  Biden was incredibly vocal about Saudi Arabia’s human rights abuses, especially their role in the murder of Jamal Khashoggi. If Biden didn’t completely destroy the US energy market, he wouldn’t need Saudi Arabia.  Biden, instead, went hat in hand to the Crown Prince to try and get more oil. (Because heaven forbid we ramp up domestic production. We may have an angry Swedish high school dropout scold us again.)  Yet it would be an incredibly awkward photo of Biden shaking the hand of the man he called a “pariah” on the world stage.  So the White House comms team spread the word that because of COVID, Biden wouldn’t shake hands with anyone on this trip.

Yet Biden managed to blunder that simple task, shaking hands with anyone and everyone in Israel, so the comms team had to scramble again.  They couldn’t snub MBS, and they couldn’t allow Biden to shake his hand either.  So they settled on a fist bump, which the Saudi’s immediately seized on. Even CNN’s Chris Cillizza, as much of a Biden sycophant as can be found in the media, published the column, “Why Joe Biden’s fist bump with MBS was such a disaster.”  At the end of the day, did Biden secure any additional oil to help the record high gas prices?  Nope.

And still, the trip was not so bad.  Nothing was done, and very little was broken, but that shows how little confidence people have in Biden’s ability to not break everything.  There are no wild proclamations, even from the leftist media, claiming that the trip was a success.  There is no change to the status quo, or commitments made that drastically alter the region.  There was just…nothing.  And maybe that’s the best anyone can hope for out of Joe Biden.

Moshe Hill is a political columnist and Senior Fellow at Amariah, an America First Zionist organization. Moshe has a weekly column in the Queens Jewish Link, and has been published in Daily Wire, CNS News, and other outlets.  You can follow Moshe on his blog www.aHillwithaView.com, facebook.com/aHillwithaView, and www.twitter.com/HillWithView.