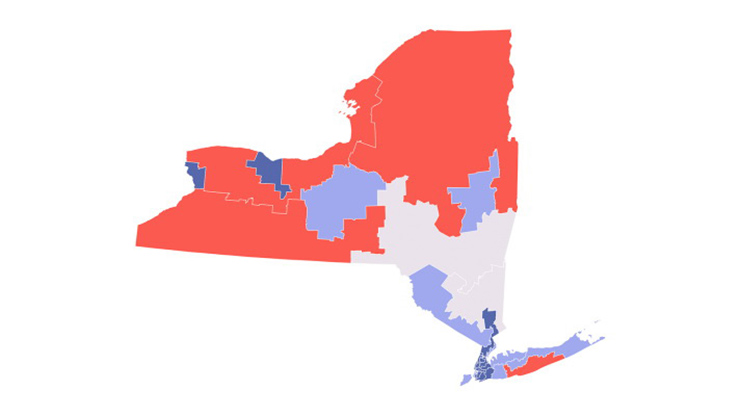 Two weeks ago, the New York State Court of Appeals threw out the gerrymandered redistricting in New York State. The maps, which were signed by Governor Kathy Hochul, gave Democrats a monumental advantage in both the State Senate and House of Representative.

Prior to the 2020 census count, Republicans held 8 of New York’s 27 congressional seats.  After the combination of the mass exodus movement combined with the higher than average COVID deaths that occurred under the Cuomo regime, New York lost one Representative to Washington.  Democrats in Albany took advantage of this loss to cut the Republican representation in half, making only four “safe” Republican seats in the state with all others solidly Democrat.

These maps were not only harmful to Republicans, but they also violated the law.  During the 2021 election, voters overwhelmingly rejected a ballot measure that would have given Democrats more power in determining new representative districts.  Democrats took that power anyway, circumventing the will of the voters.  Democrats saw their losses in Nassau County and Buffalo as harbingers of what was to come in ‘22 and decided to get ahead of it.

Thankfully, they failed – at least on the Federal House and State Senate level.  The Assembly districts did not get thrown out, but that doesn’t mean the fight is over.  The Republican plaintiffs in the case decided that the State Senate and House maps were the priority, so they did not appeal the Assembly maps.  Given that the State Senate was Majority Republican as recently as 2018, and the balance of power in the U.S. Capital could be determined by these maps, the plaintiffs strategically left out the Assembly.

However, now that those maps were tossed, New York Young Republican President Gavin Wax filed an emergency motion last Sunday night to toss the Assembly maps as well. The ruling from the court was that the process that drew the House and State maps in the first place was illegal, so there is a good chance that the Assembly maps get thrown out as well, prompting the state to scramble to draw new lines.

Either way, it looks like New Yorkers will be headed to the Primary polls twice in the next few months.  The first time will be in June, on the original date, to vote for the Democrat and Republican candidates for Governor, Lt. Governor, Attorney General, State Comptroller, U.S. Senator, and possibly Assemblymember.  The second time will be in late August, to vote for candidates for Congress and State Senate.

While no one yet knows what the new maps will look like, this court decision is a victory for the Jewish communities in New York.  Over the past few decades, more and more religious Jews have abandoned the Democratic Party in favor of the Republicans.  In the 2021 election, the Five Towns, for example, voted over 65% in favor of Bruce Blakeman and Anne Donnelly over the Democratic incumbent Laura Curren and Todd Kaminsky for Country Executive and District Attorney, respectively.  In the State Senate map, the Five Towns was cut off from the rest of Long Island and combined with deep -blue South Queens, essentially nullifying the Jewish vote. This happened in various places on the north shore of Long Island, Brooklyn, Queens and upstate areas like Monsey.  Jewish areas were split up and joined with other, bluer areas.  Even if these Jewish areas are not kept together when the new maps are drawn, it could hardly be worse than what was.

The 2022 election is shaping up to be a bloodbath for Democrats, even in a leftwing state like New York.  President Obama’s midterm election in 2010 saw five Democratic incumbents in New York lose to Republicans, with a sixth Republican winning an open seat.  In terms of generic Congressional polling, some polls have a Republican lead of 10-12 points, which is a blowout.  Governor Hochul is going through a major scandal now, as her personal pick, Brian Benjamin, had to resign from his spot as Lt. Governor over multiple indictments (including bribery).  Senator Chuck Schumer has a lower favorability rating than Joe Biden, yielding only 30%, according to the Real Clear Politics poll average.  Issues like crime are on the front of voters’ minds as every day there are more stories about shootings and violence around New York, and they place the blame where it belongs – on the one-party rule in Albany.

No one in New York should get complacent, however.  It will take an outsized effort to make real change in the state.  That effort is not only warranted; it is necessary, as the continued decline in New York due to Democrat policies is destroying what was once a great state.