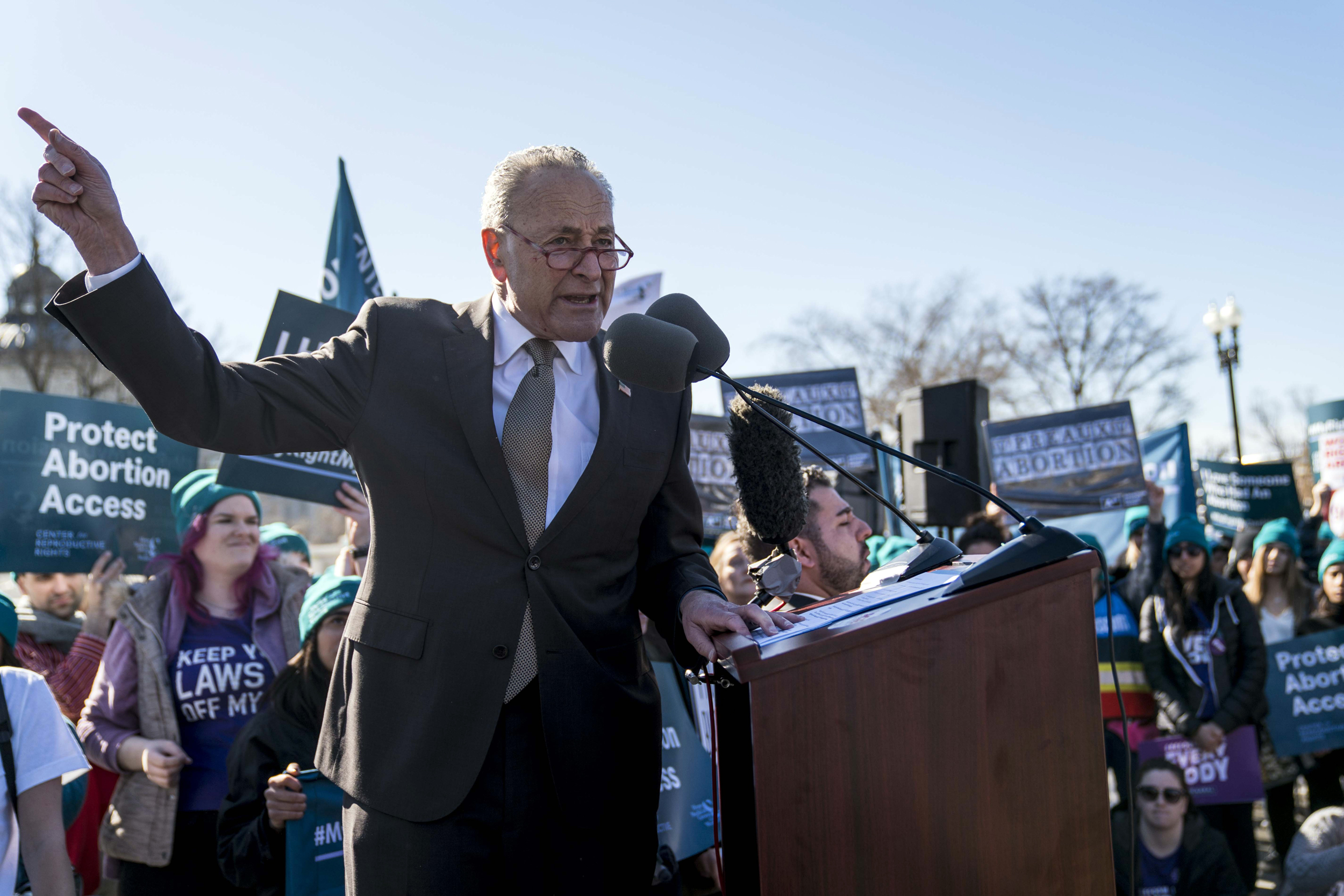 This headline is not meant to be clickbait or hyperbole.  It is the logical conclusion to a series of words and actions that would lead anyone to believe that the Democrats, as a rule, are hoping that their political enemies are killed – or at least threatened into agreement.

On March 4, 2020, at an abortion protest on the steps of the Supreme Court as they were hearing arguments on a pro-life law coming out of Louisiana, then-Minority-Leader Chuck Schumer was giving a speech.  “I want to tell you, Gorsuch, I want to tell you, Kavanaugh, you have released the whirlwind and you will pay the price. You won’t know what hit you if you go forward with these awful decisions,” he said.  Schumer is now the Majority Leader in the Senate.

Schumer is hardly alone in his rhetoric – and this is not reserved only for abortion.  When it came to Trump’s border policy in 2018, then-Minority-Leader and now Speaker of the House Nancy Pelosi said, “I just don’t even know why there aren’t uprisings all over the country. And maybe there will be.” Representative Maxine Waters said, “If you see anybody from that cabinet in a restaurant, at a department store, at a gasoline station, you get out and you create a crowd. And you push back on them, and you tell them they’re not welcome anymore, anywhere.”  Former Attorney General Eric Holder told a crowd, “If they go low, we kick them.”  Even old gentle Joe Biden, when talking about Trump, said, “If we were in high school, I’d take him behind the gym and beat the hell out of him.”

Their language on abortion is similar.  Hillary Clinton: “[This decision] will kill and subjugate women… What an utter disgrace.”  Nancy Pelosi: “Several of these conservative Justices, who are in no way accountable to the American people, have lied to the U.S. Senate, ripped up the Constitution and defiled both precedent and the Supreme Court’s reputation.” Eric Swalwell: “The Republicans won’t stop with banning abortion. They want to ban interracial marriage.”  This can go on and on.

These are the “mainstream” Democrats.  These are the people who are supposedly accountable to the voters and kept in check by the media.  Although the media isn’t any better. CNN analyst Kirsten Powers claims, “It is not fine to say that women are not full human beings, people. They’re so obsessed with how a fetus or an embryo is a person. Well, guess what? Women are people! Unborn babies are not…”  “The View’s” Joy Behar said, “I see fascism down the line here.”  Every anchor and pundit alike are making similar claims and statements, all likening this decision to the end of women’s rights, turning women into second-class citizens, and destroying America.

So there are two established facts. First, Democrats are actively saying that Republicans are evil and that this is part of a broad plan to not only overturn Roe – which would make women into pregnancy slaves or something – but also ban interracial marriage and probably legalize slavery again (although that would make the Republicans actually Democrats…).  The second is that this isn’t an issued ruling yet.  It is still a draft opinion.  As such, it can be changed, if the circumstances were correct.

So the party that bailed out rioters in 2020, ignored the Congressional baseball shooting, derided the police to the point where a Black Nationalist shot and killed five officers in Dallas, and routinely allowed and celebrated violence in every major city for years is now turning a blind eye to a clear assassination threat to Supreme Court Justices.

Once again, this is not a hyperbolic statement.  When asked about the posting of Justices’ home addresses, White House Press Secretary Jen Psaki said, “I think the president’s view is that there’s a lot of passion, a lot of fear, a lot of sadness from many, many people across this country about what they saw in that leaked document.”  No word of condemnation.  When Fox News’ Peter Doocy followed up by asking if Biden “doesn’t care if they’re protesting outside the Supreme Court or outside someone’s private residence?” Psaki replied, “I don’t have an official U.S. Government position on where people protest.” As many people pointed out, this White House had a lot more to say about parents speaking in front of school boards than they do for this.  It took another three days before Psaki issued a very watered-down condemnation on Twitter.  “[President Biden] strongly believes in the Constitutional right to protest,” she wrote. “But that should never include violence, threats, or vandalism. Judges perform an incredibly important function in our society, and they must be able to do their jobs without concern for their personal safety.”  Once again, Biden’s DOJ sicced the FBI on parents who wanted to know what was happening in their kids’ schools.

So the protesters went to the homes of the six Republican-appointed Justices and protested outside, forcing them into hiding.  They also went to churches and spray-painted messages like “if abortions aren’t safe then you aren’t either.”  They vandalized pro-life institutions with rocks and Molotov cocktails. One reporter from a left-wing publication celebrated these violent acts, tweeting, “more of this. May these people never know a moment of peace or safety until they rot in the ground.”

Pelosi issued a statement on Monday morning, after all of these events occurred.  With no reference to the acts of terror her side already committed, she continued to increase the temperature of the political conversation.  She claims, without evidence, that Republicans could “criminalize contraceptive care, in vitro fertilization and post-miscarriage care” and “will take aim at additional basic human rights.” In fact, the only mention of the implicit and explicit threats on the lives of the Supreme Court Justices was when she said, “we have been moved by how so many have channeled their righteous anger into meaningful action…”

Since the decision has not been issued, the assassination of one of the five Justices in the Majority would prevent it from ever coming to pass.  Have the Democrats given any reason to believe that’s not what they want?  While they claim to worry about the integrity of the Court, will they shed any tears if the Court is actually attacked?  In a nation with hundreds of millions of people, can anyone claim that these possibilities are not only possible, but growing ever likely?