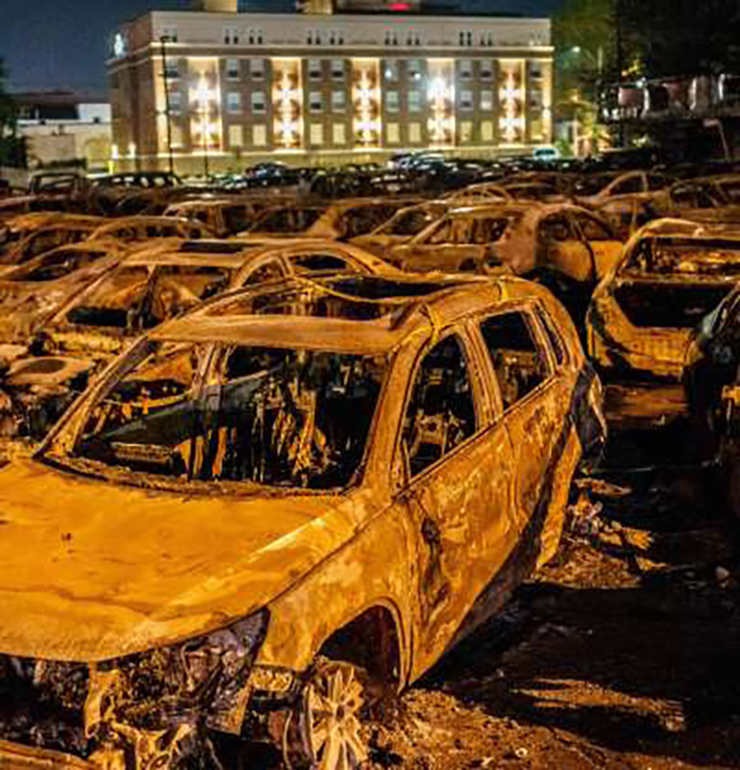 “That’s a nice country you have there. It would be a shame if something happened to it.”

The mafia tactics of the Left have broken out into mayhem around the country. Minneapolis, Portland, Los Angeles, New York, Chicago, Kenosha, and many other cities have experienced rioting, looting, arson, and murder on their streets committed by Antifa and the Black Lives Matter movement. The message is simple: “Vote the way we want or we burn it down.” This message has been cultivated by the Democratic Party for years, well before Donald Trump.

When then-Senator Barack Obama was campaigning for president in 2008, he styled himself as a Chicago politician. Chicago is well known for their history with organized crime and corrupt politicians, and Obama learned at the feet of Saul Alinsky, styling himself a “community organizer,” much like Alinsky himself. (Both David Horowitz and Dinesh D’Souza have written extensively about the connections between Obama and Alinsky.) In June of 2008, he said of his political opponents, “If They Bring a Knife to the Fight, We Bring a Gun,” parroting a line from the movie The Untouchables. The message was clear: Democrats were going to be using Chicago-style mafia tactics going forward.

The rhetoric continued during the 2008 and 2012 election cycles, with the most blatant offense being committed by the current Democratic Presidential nominee, Joe Biden. In August 2012, speaking to a predominantly African American audience, Biden said that Mitt Romney would “put you all back in chains” if he was elected. Romney, probably the most uncontroversial candidate ever put forth by a major party, was a “vicious racist” who would re-enslave African Americans. The racial divide grew wider; the flames of hatred were stoked.

In the Trump era, the rhetoric and action ratcheted up yet again. Unable to work across the aisle, Democrats actively encouraged their supporters to accost Republicans. Maxine Waters told a cheering crowd in 2018: “If you see anybody from that Cabinet in a restaurant, in a department store, at a gasoline station, you get out and you create a crowd. And you push back on them. And you tell them they’re not welcome anymore, anywhere.” Democrats took her words to heart. In 2018 alone, Homeland Security Secretary Kirstjen Nielsen, Senator Mitch McConnell and his wife Elaine Chao, who is a Cabinet member, and Senator Ted Cruz and his wife were confronted, yelled at, and otherwise verbally abused by Leftists in restaurants.

In 2017, a Bernie Sanders supporter shot up the Congressional Republican baseball team, injuring Representative Steve Scalise. Present at the shooting was Senator Rand Paul, who was later physically assaulted by a neighbor in Bowling Green, Kentucky, and was surrounded and harassed by an angry mob last Thursday night upon leaving President Trump’s acceptance speech during the 2020 Republican National Convention. So when Eric Holder, the former Attorney General for the Obama administration, said in 2018, “when [Republicans] go low, we kick them” to a cheering crowd of supporters, it’s more than gutter-level political rhetoric; these are explicit threats. The same is true when Senator Cory Booker says that Trump-supporters are “complicit in evil” and that Democrats should “get up in the face of Congresspeople.”

Fast forward to the present, where riots have been occurring for months on end, with either silence or encouragement from the media and the Democrats. When Marxists took over a Seattle police station and the surrounding blocks, creating the “Capitol Hill Autonomous Zone (CHAZ), Mayor Jenny Durkan said that the atmosphere is more like a “block party” and it could turn into the “summer of love.” CHAZ existed for nearly a month, during which there were four separate shootings, killing two. Businesses within the zone are suing the city for its “unprecedented decision to abandon and close off an entire city neighborhood, leaving it unchecked by the police, unserved by fire and emergency health services, and inaccessible to the public at large.” CNN anchor Chris Cuomo actively defended the violence when he said, “Please, show me where it says that protests are supposed to be polite and peaceful,” to which the entirety of the Internet responded with the First Amendment, “…the right of the people PEACEABLY to assemble.”

Since Cuomo’s idiotic error, protests have been consistently and unfailingly called “mostly peaceful” by the media, which is the dumbest moniker ever ascribed to a political action. As Tennessee State Representative John DeBerry Jr., a Democrat, stated, “Peaceful protests end peacefully.” For three months, a deluge of pundits and anchors have endlessly repeated the phrase, the most ridiculous being the CNN chyron, “Fiery But Mostly Peaceful Protests after Police Shooting,” while a reporter was standing in front of burning buildings in Kenosha, Wisconsin.

Democrats are actively encouraging more violence when they call to Defund the Police or praise the “mostly peaceful” protesters. Despite the attempt by the media to claim that Defunding the Police wasn’t literal, Congresswoman Ilhan Omar said, “We need to completely dismantle the Minneapolis Police Department.” So far, 13 cities have taken up the call, slashing the budgets of their police departments. This includes New York City, which removed $1 billion from the NYPD during a year where burglaries have doubled and shootings have increased almost 50 percent. Despite the increase in crime, when Joe Biden was asked if funds should be “redirected” away from cops, he replied, “Yes. Absolutely.”

So with the media covering for them and Democrats encouraging them, how should these violent protesters choose their targets? Well, Nancy Pelosi explicitly stated that Trump and his Congressional allies are “enemies of the state.” Hillary Clinton has stated that “you cannot be civil” with Republicans. Joe Biden has pledged to “fundamentally transform the country.” So the targets of the Democrats’ foot soldiers are their political enemies and the institutions of America.

The Democrats have, for years, been cultivating this moment. They egg on the violence so that when they achieve power, they can tell their supporters to end it. They gaslight the American public into believing that the devastation is imaginary. This is extortion, plain and simple. No law-abiding voter should let them get away with it. No one should succumb to this level of blackmail. Americans are still in control of their democracy, and they’ll punish those who seek to destroy the United States in the most patriotic way possible – at the ballot box.