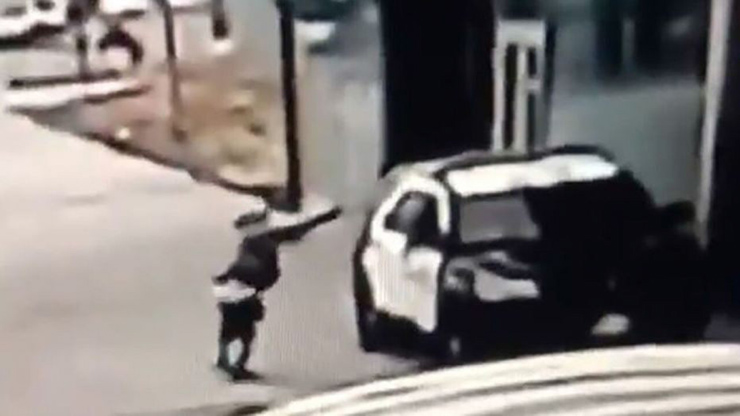 For the last five years, the political left has declared a war on law enforcement in the United States. Since the death of George Floyd at the end of May, this war has been open on the streets, with many casualties. This past weekend, two more police officers were shot at point-blank range in California. Before going to the polls in November, law abiding citizens around the country must decide who they stand with: the cops or the criminals.

It is neither hyperbole nor inflammatory rhetoric to say that there is an open war on police officers. More than 800,000 law enforcement officials conduct 375 million interactions annually with residents of this country, and the number of truly egregious acts on the part of law enforcement is merely a handful. Yet prominent Democrats like Joe Biden, Barack Obama, Kamala Harris, Hillary Clinton, and many others continue to push the idea that police officers are systemically racist and are hunting black people.

There is an overall feeling in the black community that they are targeted by police due to the color of their skin. The race of the police officer is irrelevant to this feeling. Senator Tim Scott (R-SC) recently spoke about how he has been pulled over multiple times, and he feels that it is due to the color of his skin. One of the mistakes that many conservatives make when confronting this narrative is going straight to the data and statistics related to officer-involved shootings without acknowledging this feeling. However, while this feeling should be acknowledged, the data and statistics cannot be ignored. Republicans, when making the case for law and order (as President Trump has tweeted numerous times) must walk the tightrope between feelings and facts, and cannot be afraid of being called “racist” for stating known statistics. Democrats are counting on the feelings of fear when courting the black vote, regardless of the data.

In 2019, according to the Washington Post, 14 unarmed black people were shot by police officers. Diving into the numbers, the police make approximately ten million arrests per year. When divided by race, whites are arrested 70% of the time, blacks less than 30%, and everyone else is the remainder. While white people are approximately 70% of the nation’s population, black people make up 13.4% of the population, so the arrest rate more than doubles the population. However, this is consistent with the crime rates, especially in large urban areas.

In 2019, around 1,000 people, in total, were shot and killed by police; 14 of those 1,000 were considered black and unarmed, 25 were white and unarmed. Of those 14, eight cases consisted of the suspect physically assaulting police officers, albeit without a weapon, and in most of those cases the officers attempted to subdue the suspect before resorting to their firearms. Of the other six cases, only one was truly egregious, but there was no evidence that race was involved. These cases are a fraction of a fraction of a percent; however, there is a clear narrative that the police are hunting down and shooting black people without provocation.

Despite these facts, the Democratic Platform contains language that accuses the police writ-large as being guilty of racism, thereby seeking to increase the fear in the black community. “Police brutality is a stain on the soul of our nation. It is unacceptable that millions of people in our country have good reason to fear they may lose their lives in a routine traffic stop, or while standing on a street corner, or while playing with a toy in a public park. It is unacceptable that Black parents must have “the talk” with their children, to try to protect them from the very police officers who are supposed to be sworn to protect and serve them…This is the moment to root out structural and systemic racism in our criminal justice system and our society…”

Michelle Obama, during the Democratic National Convention, claimed that there was a “never-ending list of people of color” who are murdered, referring to the handful that are killed by police and not the thousands that are killed in gang violence. A political ad has Joe Biden asking, “Why in this nation do Black Americans wake up knowing that they can lose their life in the course of living their life?” Again, this is not a reference to gang violence; it’s a reference to policing, as elaborated on later in the ad.

This is not new rhetoric. Barack Obama repeatedly used anti-police rhetoric throughout his presidency, the most brazen and audacious example was at a funeral for five Dallas officers shot by a Black Lives Matter supporter. “But we know – but, America – we know that bias remains. We know it…No institution is entirely immune. And that includes our police departments… When mothers and fathers raise their kids right and have ‘the talk’ about how to respond if stopped by a police officer – ‘yes, sir,’ ‘no, sir’ – but still fear that something terrible may happen when their child walks out the door, still fear that kids being stupid and not quite doing things right might end in tragedy…” This was the narrative that the first black president decided to push at a funeral for cops shot by a supporter of BLM. This is the rhetoric that raises the temperature in the country to a boiling point. When that pot boils over, someone is already committing a heinous act of evil.

This past weekend, two Los Angeles police officers were shot while sitting in their patrol car. The suspect was caught on video, and there was no provocation prior to this shooting. Both officers are (as of time of writing) in critical condition. New Yorkers are familiar with this style of police execution, as it occurred in 2017 when a suspect ambushed and killed an officer while he was sitting in his police car. The ongoing riots in Portland, Minneapolis, and many other cities have injured many police officers.

After the two LAPD officers were taken to the hospital, Black Lives Matter activists gathered at the hospital, blocked the emergency entrance and exit, and chanted “We hope they die.” The far-left socialist Gravel Institute responded to “Blue Lives Matter” tweet with “They Don’t.” They have since tweeted such gems as “Garbage collectors are more than twice as likely to die on the job as police officers. On average, they get paid about half as much as police officers do. And unlike police officers, they actually help their communities…”

For some reason, the Democrats have decided to side with the criminals over the cops around the country. Perhaps they feel that their only path to victory is to continue to secure 90+% of the black vote, so they push the systemic racism narrative. If so, they underestimate Black Americans, who, by polling data, want more police officers in their communities, not fewer. Republicans should continue to take up the mantle of the Law and Order party – not just because it’s electorally beneficial, but because it’s morally right.