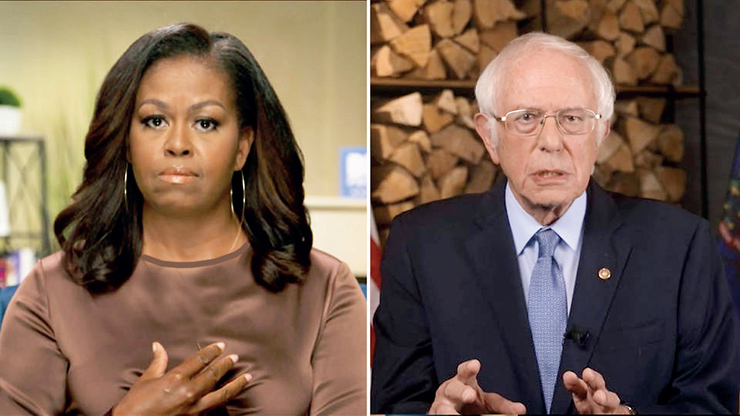 Last week, the Democratic National Convention had the opportunity to showcase the best they have to offer so Americans would choose to vote for them this coming November. Instead, what the waning audience was treated to was hatred, divisiveness, darkness, paranoia, and conspiracy theories.

The lineup of speakers was obviously chosen to troll the nation – there’s no other explanation for it. Elizabeth Warren was on the Native American panel. Andrew Cuomo lectured how to effectively lead through the coronavirus. Bill Clinton opined on the sanctity of the Oval Office. Hillary Clinton derided the notion of Trump not accepting the result of an election. Stacey Abrams was on the Governors panel. John Kerry explained how to be a successful diplomat. Michelle Obama lamented being dragged into politics. And Barack Obama stood in front of a Constitution he spent eight years destroying with his “pen and phone.”

Some topics were conspicuously absent: the riots that happened in nearly every major city, and are still happening in streets all over the country; the threats of the Chinese government, both to Americans and their own citizenry, including the Uygers in concentration camps and the brave men and women in Hong Kong. They didn’t even bring up the impeachment, primarily because they know that it was bogus and unpopular.

Instead, the running theme was hatred for President Trump, which is essentially the best case the Democrats can make at this point. Prior to COVID, the United States was, in nearly every metric, winning. The economy was breaking records, the low unemployment was historic, foreign adversaries were crumbling or negotiating. Then, a once-in-a-century black swan event hit American shores – as it did every other nation on Earth – and everything crumbled. Now everything is on its way back to normal, but the Democrats want to slow that progress in order to paint a different picture.

The Democrats and media (which are one and the same at this point) have had a running strategy against Trump, which they have utilized against Republicans in the past: scandal overload. For nearly four years, according to the media, there’s been a daily scandal coming from the White House, none of which have amounted to anything (this includes the Mueller Report and impeachment, both nothing-burgers). Now that an actual crisis is around, the Democrats can claim that Trump has been incompetent to this point because of the manufactured scandals, so he’s incapable of handling the crisis.

The DNC kicked off featuring a woman from Arizona who lost her father to COVID-19. She directly blames Trump for her father’s death, saying that her father, who was a Trump voter, was a “healthy 65-year-old” whose “only preexisting condition was trusting Donald Trump.” Regardless of how much you are mourning, this is lunacy. Your political preferences do not decide who receives and dies from the Wuhan virus. The hardest hit states have all been Democrat states who overwhelmingly voted for Hillary Clinton. Is that relevant? Clearly not.

Joe Biden and Kamala Harris, supposedly the stars of the convention but were really just afterthoughts, made ridiculous claims that cannot be fulfilled. Harris said that Biden will “end this pandemic.” How? She does not elaborate. Biden claimed that he will protect America from threats “seen and unseen.” Again, no further details are given to how he will accomplish this miraculous accomplishment. When mentioning COVID, Biden simply lied about what’s been happening, claiming that America has had the “worst performance” anywhere in the world. In deaths per million, the US is currently ranked tenth, and if five Democratic governors didn’t force COVID-positive cases into nursing homes, America would be far lower.

Leading the charge on dividing the country by race was Michelle Obama, who claimed that there was a “never-ending” list of unarmed black people killed by the police. That “never-ending” list had 15 names on it in 2019, and most of those incidents were not disputed circumstances; the police officers had the authority to do what they did. She also made the ludicrous claim that people won’t listen to what she says because she’s a black woman. This is the same person whose memoir sold over ten million copies as of March 2019, making it one of the most successful books this century. She blamed Trump for putting children in “cages,” ignoring that those cages were built by her husband’s administration. Facts are irrelevant, apparently, when you’re trying to divide and conquer a nation.

Paranoia and conspiracy theories were heavily featured, as well. The favorite line of attack was articulated by Barack Obama, who said, “our democracy” is at stake in this election, the obvious implication being that voting for Trump demolishes democracy itself. Hillary Clinton said, “Remember in 2016 when Trump asked: ‘What do you have to lose?’ Well, now we know: our health, our jobs, even our lives. Our leadership in the world and, yes, our post office. As Michelle Obama and Bernie Sanders warned us on Monday: If Trump is re-elected, it will get even worse.” The last two people that Democrats have put up as Presidential candidates are attempting to convince their voters that the country will collapse if Democrats are not elected.

This is the blackmail aspect of the Democratic Party, and there are fascistic foot soldiers on the streets who are bullying the American people to vote for Democrats. Obama praised these people, referring to them as “the young people who led us this summer,” when in reality they are rioters and looters. When discussing these “young people,” was he talking about the autonomous zone in Seattle, where multiple people were shot and a neighborhood was destroyed? Or was he referring to Portland, which is going on its third month of nightly riots? Maybe the leadership he’s referring to is the “defund the police” crowd, which is leading to record high shootings in cities like Atlanta, New York, and his hometown of Chicago.

There is a tacit threat underlying all the chaos sowed by the Democrats, cultivated by the media, and embodied by the Democratic National Convention. The threat is: “Vote our way, or this all continues. States will remain shut down, cities will continue to burn, and nightly newscasts will fill you with fear.” That was the message of the DNC, and President Trump has just over two months remaining to show these Democrats that Americans don’t cower in the face of these tactics.

Moshe Hill is a political analyst who has written for The Daily Wire, the Queens Jewish Link, The Jewish Link of New Jersey and www.JNS.org. He is regularly featured on ‘The Josh M Show’ podcast. Subscribe to aHillwithaview.com for more content from Moshe Hill. Like him on Facebook at facebook.com/ahillwithaview and follow him on Twitter @TheMoHill.