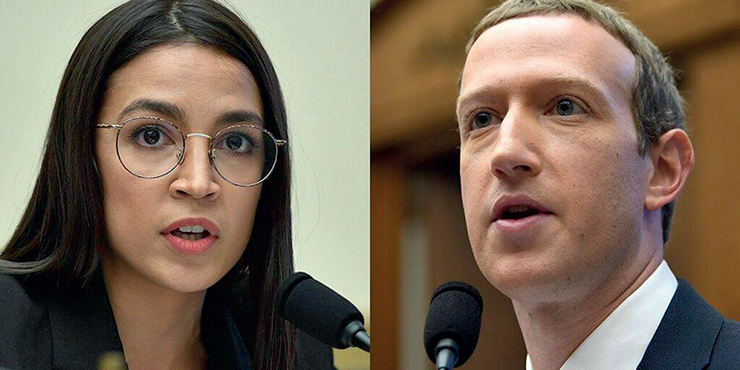 Last week, Mark Zuckerberg, founder of Facebook and the eighth richest person in the world, was brought before Congress so he can be raked over the coals for his company’s most recent policies. Ostensibly a hearing about Facebook’s proposed cryptocurrency, the inquiry quickly devolved into attacks on Facebook’s unwillingness to go along with the Democrats’ plan to regulate speech and prevent voters from hearing from all candidates.

Facebook, along with other sites like Twitter and YouTube, have been the subject of scrutiny for years following the 2016 election. Many Democrats, including Hillary Clinton, blame Facebook for President Trump’s victory. Many Republicans are scared of the social media giant, because they look at Facebook as actively trying to suppress conservative speech. The new media hates Facebook, because it gives a large platform to their new media competitors, especially the conservative sites. Politicians and pundits alike don’t know how to grapple with this technology yet, despite the fact that it’s been a prominent part of American life for 15 years.

In their defense, however, Facebook barely knows what to do with their own power, as well. They are constantly attempting to keep up with the social and political pressures put upon them. They barely know how to define themselves. Are they a platform, like the United States Postal Service or the telephone line, or are they a publisher, like The New York Times? Whatever the answer is, they feel a certain responsibility for the content posted by their 2.375 billion average monthly users.

Many of those users are political campaigns, who buy advertisements on Facebook to reach the voters. This is where the controversy comes in, and where the Democrats are seeking to take control of Facebook so they can control what Republicans advertise to the public. Democrat Congresswomen Alexandria Ocasio-Cortez and Maxine Waters repeatedly questioned Zuckerberg’s fact-checking policies on political advertisements. Ocasio-Cortez went so far as to claim that one of Facebook’s approved fact-checking sources, the Daily Caller, was a white supremacist organization. She should be grateful that nobody is live-fact-checking Congressional hearings.

For those in the “Facebook is a platform” camp, the idea that Facebook should be regulating the political speech of any party, right or left, is absurd. Facebook should no more be fact-checking campaign narratives and spin any more than AT&T should be listening in on phone calls and fact-checking those, or the Postal Service should fact-check mailers that candidates send to houses.

Those who argue that “Facebook is a publisher” have more ground to stand on, because if Facebook is a publisher, then they are responsible for the content that appears on their site. However, if that argument wins out, Facebook will be sued out of existence by all the scorned individuals who have lies posted about them on social media (read: everyone).

The problem that Facebook has is that Democrats used to have a stranglehold on what constitutes the “truth,” as their media allies would give them cover for all of their scandals and provide the narratives for all their policy proposals. This is the only way President Obama could claim that his administration was “scandal-free” or why CNN holds massive town halls promoting gun control and climate change legislation. Facebook has become the vehicle where opinions and analysis from conservative media can be disseminated to literally billions of people without having them subscribe to a magazine or tune in to an AM radio station.

This is not to give the impression that Facebook is a conservative-leaning company; quite the opposite. Facebook, Twitter, YouTube, and Google have all been heavily scrutinized by conservatives for manipulating search results, modifying autofill, kicking people off of platforms, and a bevy of other allegations. Dennis Prager of Prager University is suing Google and YouTube for censorship. There are many on the political right, like Tucker Carlson, who think that regulating social media is an acceptable remedy for these issues.

The danger of such regulation became evident in the hearing that occurred. Those who look at anything that Trump says – or Republicans writ large – as a “lie” would use the regulatory power at their disposal to silence their political opponents. Furthermore, if President Trump is as evil as Democrats think he is, they shouldn’t want him to have the ability to regulate Democrats’ ads either. Democrats are repeating the same mistakes they made when they got rid of the judicial filibuster. They had no say in the matter when a Republican won back the Oval Office and Republicans held the Senate.

Mark Zuckerberg should not be fully trusted, given the amount of power he has. This past June, Dr. Robert Epstein, former editor of Psychology Today, testified before Congress about the findings of his studies of Google’s effect on the 2016 election. According to his research, bias in Google search results may have shifted 2.6 million undecided voters to Hillary Clinton (whom he supported). In 2018, that same search result bias “may have shifted upwards of 78.2 million votes to the candidates of one political party (spread across hundreds of local and regional races).” Google, Facebook, Apple, Twitter all send out notifications to hundreds of millions of smartphone users every day. They know, based on social media posts, search history, and many other data points in their algorithms, who is most likely to vote for which political party. If they choose to only send “Go Vote” reminders to those who vote Democrat, they can swing elections easily. This is a major issue when maintaining election integrity.

Democrats are drooling at the prospect to control that much power (any politician would). It’s a dangerous aspect of our modern world. For now, Zuckerberg’s stance on free speech seems solid. It is incumbent on every American – left, right, and center – to keep it that way. It’s the only way to guarantee that everyone has access to a diverse viewpoint, not just what the left wants you to hear. Any politician who seeks to control that power is doing so for his or her own selfish purposes. The general public in this country should hope that their means of gathering information outside of the left-leaning mainstream remains as far away from Washington bureaucrats as possible.

Moshe Hill is a political analyst who has written for The Daily Wire, The Queens Jewish Link, The Jewish Link of New Jersey and JNS.org. He is regularly featured on “The Josh M Show” podcast. Subscribe to www.aHillwithaview.com for more content from Moshe Hill. Like him on Facebook at facebook.com/ahillwithaview and follow on Twitter @TheMoHill.