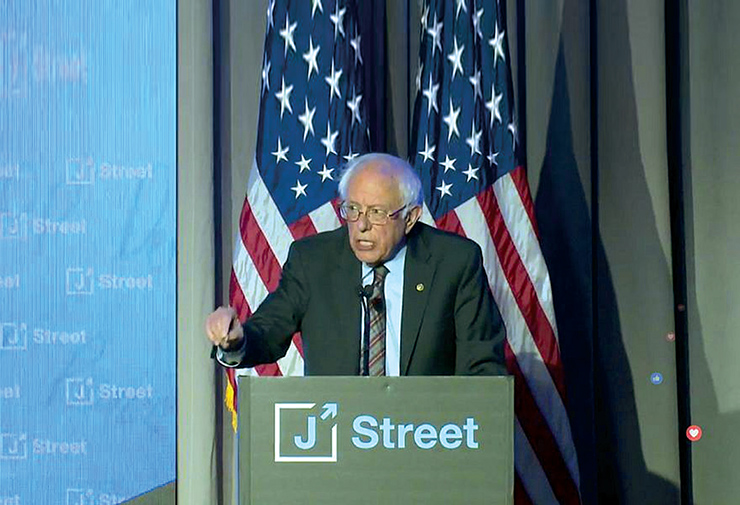 Last week, a strong correlation occurred between two events on different sides of the world. The first was the appearance of major Democratic Party presidential contenders Bernie Sanders, Elizabeth Warren, and Pete Buttigieg at J Street’s annual conference, where they promised in some degree or another to radically shift American policy towards Israel. The second is the renewed rocket fire from Hamas terrorists in Gaza, who lay dormant for nearly a month.

Here is some background on J Street, which at this point is well known for its rabid anti-Israel stances and policy positions. According to OpenSecrets.org, which tracks contributions to political campaigns, J Street outspends every other Israel-related PAC, and they contribute solely to Democrats. Following the logic of the Left’s attacks on groups like the NRA, top-tier Democrats could be said to be “in the pocket” of J Street.

According the J Street’s website, they believe that “Israel must choose among three things: being a Jewish homeland, remaining democratic, and maintaining control over all the land between the Jordan River and the Mediterranean Sea. It can only have two: It can only remain both Jewish and democratic by giving up the land on which a Palestinian state can be built in exchange for peace.” This is ignorant of both history and current events. There could have been a Palestinian state half a dozen times in the past century. In 2000, when Prime Minister Ehud Barak offered Yasser Arafat nearly all of the West Bank and East Jerusalem, Arafat replied with the Second Intifada. In 2008, when Prime Minister Ehud Olmert offered Mahmoud Abbas the West Bank, including the Jordan Valley and a land bridge to Gaza, Abbas walked away from the table, never to return.

Israel does not have a peace partner, and that is not because of “settlements” or “occupation,” as J Street and other leftist organizations would have you believe. Israel does not have a peace partner because the stated goal of the Palestinian leadership, since 1948, is to destroy the State of Israel “from the river to the sea.” This has become mainstream policy amongst the American socialist Left as well, with the Democratic Socialists of America voting BDS as part of their national platform in 2017 (which was followed by chants of “from the river to the sea, Palestine will be free” – a clear call for Israel’s destruction).

Pete Buttigieg said he would condition US military aid on settlement construction in Judea and Samaria. This follows the statements he made in June that “the Netanyahu government is turning away from peace.” Buttigieg is of the opinion that it is the Israelis who are unwilling to come to the negotiating table, despite the fact that it has been over ten years and countless terrorist attacks from the Palestinians since there’s been even a hint of willingness to negotiate.

Elizabeth Warren, in a video message, derided the “far right-wing policies of the Netanyahu government” when saying that there can be a peaceful Palestinian state in Gaza and the West Bank that would “end the occupation.” Elizabeth Warren clearly didn’t get the memo that Israel unilaterally pulled out of the Gaza Strip in 2005, forcibly removing Israelis in the process. Hamas has controlled that area since then. She said that if she becomes President, she would “immediately resume aid to the Palestinians.” That aid was cut by the Trump administration because it was used to pay the families of terrorists and was stolen by Hamas to build terror tunnels. Warren says she will “apply pressure and create consequences for problematic behavior,” and then uses Israeli construction as an example of that behavior (terrorist attacks are not considered good enough examples of “problematic behavior” to Elizabeth Warren). Warren plans to aid the groups that pay for and cheer on terrorist actions, and pressure the state that is not just the only democracy in the Middle East, but also the only Jewish state on Planet Earth.

Not to be outdone by anyone, Bernie Sanders actually endorsed the idea that US military aid should be redirected towards Hamas-governed Gaza. The US currently gives $3.8 billion in aid to Israel, of which at least 75 percent must be spent in the US. Gaza has used the humanitarian aid sent to them for the past decade for the purposes of conducting terror attacks on Israel, shooting thousands of rockets annually into coastal and southern Israeli cities. Those cities aren’t even in the disputed areas of Judea and Samaria, and Gaza is not “occupied” by the Israeli military.

As if to punctuate how terrible these proposed policies are, Hamas launched ten rockets from Gaza this past weekend. Eight of the rockets were intercepted by the Iron Dome, and one hit a home in Sderot. It is somewhat poetic that this should occur within days of top Presidential candidates openly saying that they wanted to redirect money from the system that defends innocent Israeli lives to the system that attacks those innocent Israeli lives.

It would be irresponsible to say that the Democrats have that blood and damage on their hands (although that didn’t stop those same Democrats from saying the same about President Trump when there was a mass shooter in El Paso). However, their proposed policies regarding the conflict between Israel and the Palestinian people have been proven failures over and over again. They do not care about the historical failures of said policy, nor of the myriad of spurned opportunities there have been for peace. They only see a prosperous Israel sitting next to third-world Palestinian conditions, and make the foolish and incorrect connection that this only exists through Israeli oppression.

This is dangerous, ridiculous, insane, and absolute mainstream Democrat policy towards Israel. If Israel is to be secure, these policies must be defeated at the American ballot box.

Moshe Hill is a political analyst who has written for The Daily Wire, The Queens Jewish Link, The Jewish Link of New Jersey and JNS.org. He is regularly featured on “The Josh M Show” podcast. Subscribe to www.aHillwithaview.com   for more content from Moshe Hill. Like him on Facebook at facebook.com/ahillwithaview and follow on Twitter @TheMoHill.