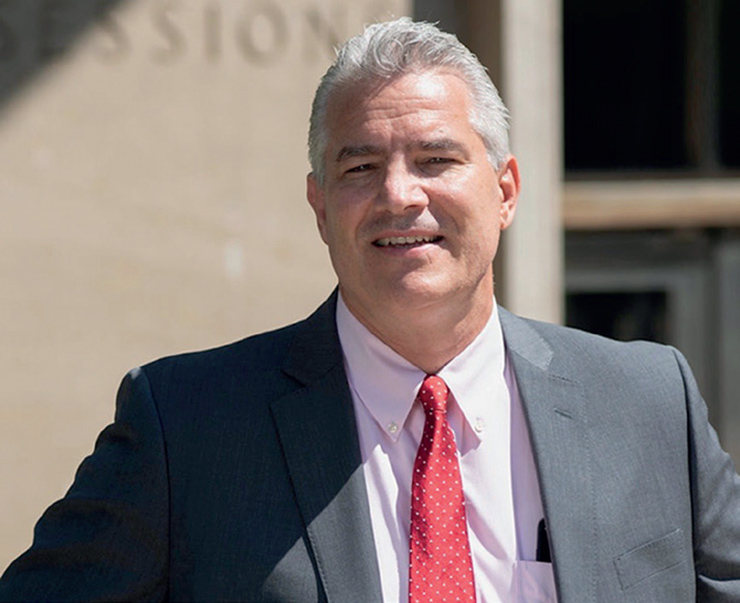 The Queens Jewish community breathed a collective sigh of relief when the final ballots were counted in the Democratic Primary race for Queens DA. Tiffany Cabán, a progressive socialist in the same ilk as Bernie Sanders and Alexandria Ocasio-Cortez (who endorsed her) frightened people so much that there was an immediate voter registration drive with an urging to register as a Democrat. If Queens is so deeply Blue, then logic would dictate that even the conservative voter should register as a Democrat so that a more mainstream politician would reach the general election. The Democratic mainstream, however, has gone so far to the left that a lifelong Democrat is now running against Melinda Katz as a Republican.

Joe Murray was a police officer in the NYPD from 1987 to 2002. According to Murray’s campaign website, in 2001 he was defending himself in a civil lawsuit, and after a successful verdict, the trial judge encouraged him to go to law school. By 2006, Murray had passed the NYS Bar exam and began practicing law. With his police background, he quickly found his passion: criminal defense litigation.

Murray’s path to the nomination was unconventional (to say the least). The Democratic Primary for Queens DA was tightly contested. Seven candidates vied for a seat that was occupied for nigh on three decades, only to have it come down to a multi-week recount where the victor won by a few dozen votes. While all this was happening, on the other side of the political aisle, the Queens GOP was sitting quietly with their uncontested candidate, Daniel Kogan.

In late August, the Queens GOP leadership, under the direction of Queens GOP chairwoman Joan Ariola, applied the Wilson-Pakula Law, which allows parties to nominate candidates that are not registered members. Kogan was tapped as a judicial nominee, and the Queens GOP leaders unanimously voted to give Joe Murray the nomination for Queens DA. Thus began Murray’s ten-week sprint to the general election against the Queens Borough President and heavy favorite Melinda Katz.

Murray is no stranger to tough battles. He boxed in the police department, competing in heavyweight and super-heavyweight tournaments. A physical fight was the inciting incident for his civil woes, when he broke a fellow police officer’s jaw during a 1993 brawl. After testifying about the incident before the Grand Jury, Murray wasn’t indicted, but thus began an eight-year battle to fully clear his name.

Speaking before the Whitestone Republican Club at their monthly meeting, Murray was upfront about his Democratic Party affiliation. “I come from a union family,” Murray told the crowd. “My son is a union Local One plumber; my brother’s a Local Three electrician. My uncles are all teamsters – truck drivers in the airport. I started out working in the airport,” Murray said. The Trump-supporting Democrat was incredibly grateful for the opportunity to run on the Republican ticket. “That Democratic Party is like organized crime. I’m disgusted. I am a Democrat, but I am here under this Wilson-Pakula. Thank God that the Republican Committee and the executive committee voted me in, because I want to fight them. I’m sick of it. My own party, I’m sick of it, the corruption.”

This is Murray’s first campaign. He “thought about running initially,” but decided against it when he saw that Judge Greg Lasak was running. “Greg is a friend,” Murray says, “and in my opinion, I found him to be the absolute most qualified person” in the Democratic primary. After Judge Lasak came in third place in that primary, when Tiffany Cabán was still considered the victor of that vote, there were rumors that either Lasak or Melinda Katz herself would try to run as the Republican. Murray, however, is disappointed that, in the General Election, he has not received the support of the more “law and order” Democrats, especially in light of the major changes the city and state are implementing in criminal justice.

These changes are occurring swiftly in the State Legislature, where cash bail will become a thing of the past starting in 2020, and in the City Council, which just voted to close Rikers Island and open four new jails in Queens, Manhattan, Brooklyn, and the Bronx. New York State is essentially under one-party rule, and the Democrats have been taking full advantage to push through their policy proposals that have been stymied by Republicans for a decade.

Murray relayed first-hand knowledge of a subcommittee meeting that was discussing closing Rikers Island. “I snuck into City Hall in the subcommittee to hear what was happening,” Murray said. “I was shocked to hear publicly what they were saying. They were actually congratulating each other. How wonderful a job everyone did, and how this is such a great thing. We’re closing Rikers Island, but it’s only the first step. They said this is the first step towards eliminating all jails and prisons. They don’t believe incarceration is a proper punishment. This is where they’re going.” Abolishing prisons is also a proposal made by Congresswoman Alexandria Ocasio-Cortez, who said via Twitter: “…We need to have a real conversation about decarceration & prison abolition in this country…A cage is a cage is a cage. And humans don’t belong in them.”

When discussing his chances in the deep blue Borough of Queens, Murray was optimistic. “The Democratic Primary was one of the most publicized, heated arguments that that went on, debate after debate,” Murray said. “There were 731,000 Democrats (primary voters). They got 35,000 each. They’re so beatable. If we could just mobilize and come out and come out together, we can beat them.”

Mobilizing the residents of Queens with mere weeks left before the General Election would be a shot to the Democrat Party heard around the country. Queens has some of the districts that Nancy Pelosi said that a “glass of water with a ‘D’ next to it” would win. On November 5, Joe Murray is going to try to reverse that trend.

Moshe Hill is a political analyst who has written for The Daily Wire, The Queens Jewish Link, The Jewish Link of New Jersey and JNS.org. He is regularly featured on “The Josh M Show” podcast. Subscribe to www.aHillwithaview.com for more content from Moshe Hill. Like him on Facebook at facebook.com/ahillwithaview and follow on Twitter @TheMoHill.