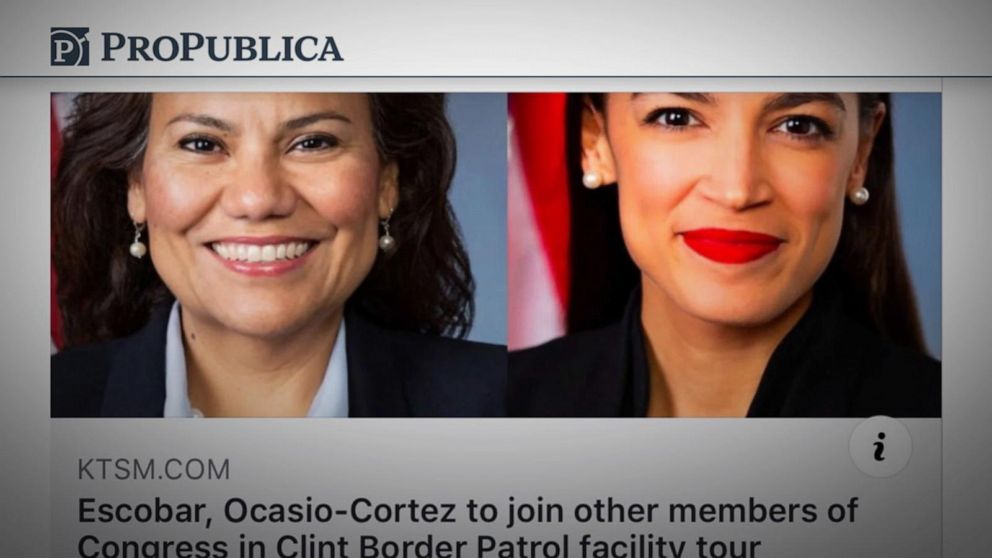 A recent article published by ProPublica is making waves today, because it allows the Democrats to smear and slander thousands of hard-working Customs and Border Patrol Agents.  After many on the left, led by the despicable Alexandria Ocasio-Cortez, began referring to the detention centers as “concentration camps”, the time is ripe for a new classification of CBP Agents.  Soon they will be referred to as SS or Nazi guards, and blaspheming them en masse is the first step towards that.

The article in question is about a Facebook group called “I’m 10-15” with 9,500 members, presumably current or former members of CBP, in which a few comments are being considered racist and sexist.  The response to this news, like all other Democratic responses over the past few years, have been blown wildly out of proportion with the accusations made.

Ocasio-Cortez, as usual these days, led the charge against CBP.  She has a long history of wanted to shut down CBP and ICE, most recently in a statement made with Ilhan Omar, Rashida Tlaib, and Ayanna Pressley.  In the statement, they referred to ICE and CBP as “radicalized, criminal agencies” and said they would vote against more funding for border facilities.  (She apparently doesn’t see the hypocrisy of refusing to fund facilities while complaining about lack of supplies.)  After this ProPublica piece was conveniently released the same day she was touring the facilities,   she went on a rampage.

Via Twitter, she accused the Facebook group of being “racists & sexually violent”, and then threw almost half of the CBP agents in the country in that label.  She accused “9,500 CBP officers sharing memes about dead migrants and discussing violence and sexual misconduct towards members of Congress”, then questioned their ability to do their jobs.  She referred to CBP as a “rogue agency” because its members are in a Facebook group.

Ocasio-Cortez isn’t the only member of Congress that are blowing this story out of proportion.  Democratic Florida Representative Frederica Wilson (a.k.a. the one with the hats), said that the people “making fun of members of Congress” in online posts should be “shut down” and “prosecuted”.  Apparently Wilson had her fingers crossed when she took her oath of office, because America has Free Speech.  People are allowed to make fun of as many elected representatives as they want.  If not, half of Hollywood would be behind bars for public statements about President Trump and other Republicans.

Needless to say, the expansion of the actions of a few into the guilt of many, especially in the Wild West of social media, is a dangerous and preposterous notion.  Guilt by association is not new, as Democrats have been assigning guilt to people based on geography, skin color, or headgear for years.  This is merely the next logical step in their attempted takeover of every cultural space and the ever-shrinking of the Overton window.  The Democrats are saying that if anyone is part of any group that contains a post or a comment that they consider racist or sexist (and the criteria for those classifications is ever-expanding), EVERYONE in that group is racist and sexist.

Its worthwhile noting that the article had 3 examples of egregious posts and comments, and they deliberately removed displaying Likes and Comments from two of them.  They also do not mention how many posts per day there are in this group, or how active members of the group are.  This literally could be a few people amongst thousands, there is no evidence either way.  This also could be someones “online persona”, which wildly differs from what the person does away from the computer.  Now, while that is not an excuse for racist or sexist behavior, it is something that anyone who has spent a modicum of time on social media can understand.  What people say from the safety and comfort of their own homes on a keyboard is, for the most part, a far cry from their actions in real life.

Regardless, the disingenuous nature of these accusations leaves little doubt that this is part of a larger agenda.  That agenda is to throw the crisis at the border into further disarray until the only options remaining are mass deportations or full amnesty.  The democrats are betting the lives of illegal migrants and the future of the American people on one day having enough political clout to push amnesty for tens of millions.  This begins with demonizing the people in charge of preventing those illegal immigrants free reign within America’s borders.

Americans must stand with CBP and should push for strict enforcement of our borders.  Anything less is giving in to the open borders agenda of the modern Left.

Moshe Hill is a political journalist who has written for The Daily Wire, The Queens Jewish Link and The
Jewish Link of New Jersey.  He is regularly featured on ‘The Josh M Show’ podcast
Subscribe to aHillwithaview.com for more content from Moshe Hill.
Like him on Facebook at facebook.com/ahillwithaview and follow on Twitter @TheMoHill