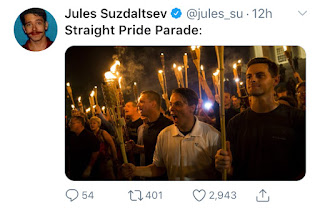 In response to Pride Month, a group in Boston is planning a ‘Straight Pride Parade’, drawing a lot of criticism from the LGBT crowd.  The online backlash is predicatble, saying things such as “straight people do not deserve a parade, as they have never faced hatred”, “straight people have every other month of the year, let the Gay people have this one”, “the losers who are organizing the parade are evil.”  However, those who do not have a dog in this fight may be swayed by this parade, because the backlash is shedding some important light on a subject that Pride Month tries to ignore.

Events and reactions similar to the ‘Straight Pride Parade’ are fairly commonplace.  There have been petitions and call for a ‘White History Month’ and an ‘International Men’s Day’.  Nearly every time someone posts anti-white racism or anti-male sexism on social media, there will be replies and comments that simply reverse the races or sexes of the statement just to magnify the ridiculousness and bigotry of the poster.  The idea of doing all of this is to highlight the absurdity of identity politics, and to expose the lie that America is a bigoted country.

Identity politics took hold of the left years ago, and they are not relinquishing it anytime soon.  Stacey Abrams, failed Georgia gubernatorial candidate and darling of the Democratic Party (who had her give the rebuttal to President Trump’s State of the Union) said in a speech “Identity politics is exactly who we are and exactly how we win”.  New York Senator and Presidential Candidate Kirsten Gillibrand tweeted that the future was “intersectional”.  Barack Obama used identity politics, as did Hillary Clinton.  It is so pervasive in American culture that the media just assumed that the right uses identity politics as well, and so they accuse trump of appealing to white men for that reason alone.

When identity is paramount, ideas lose.  It doesn’t matter what you think, it matters who you are.  That is a dangerous game that is constantly being played, and it’s only polarizing our society even more.  So what happens when the identity that is being promoted is one that the left does not deserve a place in the spotlight?  Well, we see from the backlash that responses either show hatred of the promoted identity, or the cause to justify the “oppressed” identity.

Some of the more simplistic replies revolved around calling the organizers of the ‘Straight Pride Parade’ come from our media and celebrity betters.  Rapper Lil’ Kim claims that being straight means you sexually assault women.  Vice Contributor and NowThis producer Jules Suzdaltsev said that the straight pride parade was the white supremacist march in Charlottesville.  Actor Chris Evans accused the organizers of being closeted homosexuals.

Other replies were more nuanced, and thus deserve much more attention.  Obviously, homosexuals in America have historically had to live a more secretive life for fear of the social repercussions.  American society has come to a point where that is no longer necessary.  Gay marriage is legal, by polls the majority of Americans don’t care, and nearly every single large company is publicly supporting the LGBT community.  Coming out of the closet is probably difficult for everyone who had to do it, but in general, it’s much easier than it was 30 or more years ago.   (Generalities are important.  There are probably plenty of tough stories out there).

The focus also turns to the issues around the world, which should be the main focus of Pride Month.  There are countries where it is illegal to be gay, where homosexuals are murdered for it.  These countries are the ones run by Sharia Law, and are Muslim majority.  Currently, homosexuals can receive the death penalty in Afghanistan, Brunei, Iran, Mauritania, Nigeria, Pakistan, Qatar, Saudi Arabia, Somalia, Sudan and Yemen.  There are 62 other countries where homosexual activity is illegal and could receive some form of imprisonment.  This should be the focus of Pride Month, not Elizabeth Warren in a feather boa.

Shifting the focus from fancy rainbows and in-your-face corporate advertising to actual issues plaguing homosexuals worldwide would actually be a useful use of time.  Perhaps the ‘Straight Pride Parade’ will accomplish that, but it’s doubtful.  It will turn into another excuse for polarization and hatred among Americans, who already live in the freest and most tolerant society in the world.