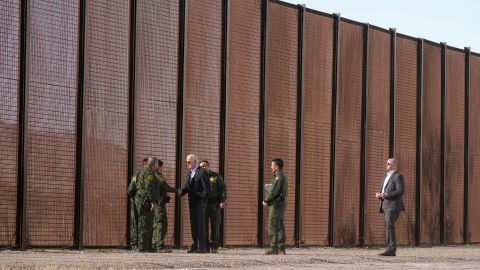 The week leading up to the Presidential visit was a busy one for El Paso, as government officials hurriedly cleaned up the city to give Biden a false impression of the reality of the situation.  This is reminiscent of when Chinese officials used to ship the same steel beams from town to town ahead of Mao Zedong’s visits to show the Communist Chairman that his “Great Leap Forward” was working. Illegal immigrants have been living in makeshift shelters, and even dumpsters, until they were arrested and removed to show the media cameras that all is well.

The Border Patrol Union made its stance on the President’s trip known, tweeting on Friday: “El Paso being cleaned up as if nothing unusual ever happened there. Just in time for Biden’s ‘visit to the border’. We suggest just landing in Des Moines, Iowa and telling him it’s El Paso. He’ll never know the difference.”  National Border Patrol Council President Brandon Judd told Fox News Digital in a recent interview that agents are “beyond frustrated that he allowed this issue to get as bad as it is, he’s not coming to the border of his own accord. He would have done that a long, long time ago.”

The logic for him coming to the border at this time is simply political optics.  After 2,500 illegal border crossings were happening per day in December, the news couldn’t be ignored any longer.  Now that Biden is comfortably past the midterm elections, and is gearing up to announce his reelection campaign, he can throw some bones to the few Democrats that are still pretending to be concerned about border security.  Now he can say he’s been there.

Yet this fools no one.  While slightly better than Border Czar Kamala Harris’s “trip”, in which she stayed in the airplane hanger miles away from the actual border, this show-visit is nothing but a photo op and an excuse for all the media sycophants who have been waiting to defend Biden.

November 2021 saw the highest total of illegal immigrants attempting to cross the U.S.-Mexico border in Department of Homeland Security history, with 233,740 apprehensions. This marks a 332% increase from the average number of November apprehensions during the Trump administration. Among these illegal immigrants were 13,150 unaccompanied children, and at least 9 people on the terror watchlist who were apprehended trying to enter the U.S. between ports of entry. In total, 5.3 million illegal immigrants have crossed the border since Biden took office, including the 4.3 million apprehended by Customs and Border Protection and the over 1 million who escaped past Border Patrol into the U.S.

Illicit drugs, including 2,900 pounds of fentanyl and 10,722 pounds of methamphetamine, are also flowing into the country at alarming rates. Despite the ongoing crisis at the southern border, President Biden has not visited to address the situation and has instead focused on other issues, leading Border Patrol agents to say “what is happening at the border is exactly what he wants.” The situation at the border has also led to a rise in drug overdoses and synthetic opioid deaths, as well as human rights abuses and exploitation by criminal organizations.

Despite this, the Biden administration expects us to believe them when Homeland Security Secretary Alejandro Mayorkas claims that the “border is secure.”  Yet if the border is secure, why are they suddenly implementing policies to secure the border? “[T]oday we are announcing new border enforcement measures to improve border security, limit irregular migration, and create additional safe and orderly processes for people fleeing humanitarian crises to lawfully come to the United States,” Mayorkaas said.

There is zero interest in actually enforcing the laws on the books, so they are blaming the laws for being “outdated.”  They request 100 immigration judges to help process asylum cases, which currently are backlogged at 2 million for the 500 judges that they currently have.  100 judges is nothing but a prop and a gimmick.  Mayorkas erroneously claimed a decade old statistic that there are “11 million undocumented people in our country” when the number is at least twice that.

Biden didn’t meet with any illegal migrants on his visit to a detention center.  As per CNN, “Asked to explain the thinking behind having Biden visit this specific center and ultimately not meeting or interacting with any migrants there, a senior administration official told CNN, “There just weren’t any at the center when he arrived. Completely coincidental. They haven’t had any today.””  Convenient.

Senator Ted Cruz blasted Biden for his faux-visit.  On his podcast, Verdict with Ted Cruz, Cruz claimed that if Biden really wanted to see what was happening, he would visit the Rio Grande valley, where the crossings occur.  “This is 100% politics, this is 100% optics.  This is to get his laptogs in the corporate media to say, “The border is fine.” The Rio Grande is the site of most deaths from crossing the border. “Last year over 800 people died crossing the border illegally,” Cruz said.

Biden left as quickly as he came.  Job done, mission accomplished.  He saw the border and he’s headed back home to pretend that there is no issue and that all the hoopla is simply right wing conspiracy theories.  But that’s not even the problem. The problem is that the media will echo the sentiment, the Democrats in the Senate will do nothing to alleviate the situation, and the only ones that suffer are the illegal migrants and the American people.