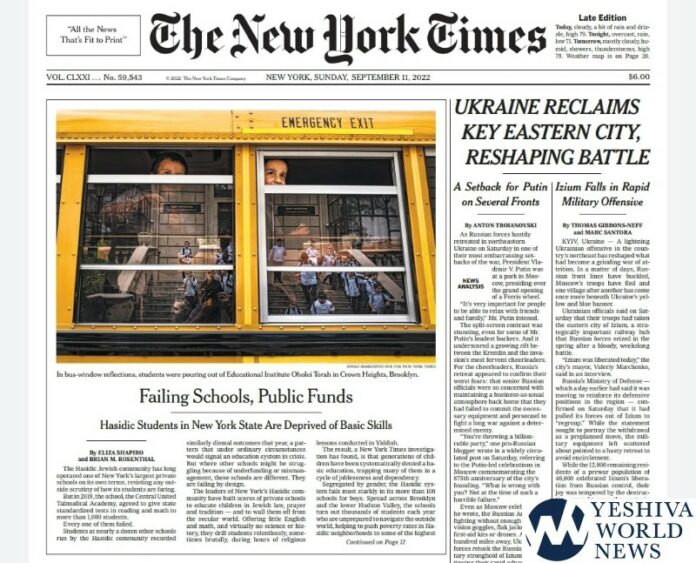 The New York Times has had it in for the ultra-Orthodox Jewish community for some time now. While many communities have problems that deserve diligent coverage and public scrutiny, New York’s ultra-Orthodox have been covered and scrutinized to a degree that is wildly out of proportion to their relatively small population. A group of 50,000 to 100,000 people is not small, but in a city of eight million and a state of 20 million, it is impossible to justify the scorn to which they have been subjected.

Since 2012—although the Times’ disproportionate coverage of the community began well before that—the Times has written about the ultra-Orthodox community’s tendency to under-report crimes, as if this did not happen in many other communities, published long pieces on how difficult it is to leave the community, blamed it for measles outbreaks and mocked it for its stance on Covid lockdowns and vaccine mandates.

The most striking case was a Times editorial in Yiddish that called on anyone who didn’t like their yeshiva education to contact the paper. This corresponded with a massive exposé on the state of ultra-Orthodox education. The Times is the paper of record in a state that is ranked 23rd in education despite more per-pupil spending than anywhere else in the country, yet it did not put out a public call for information on the shoddy state of non-Jewish public schools.

During the current election campaign, New York’s ultra-Orthodox population has largely shunned Democratic gubernatorial candidate Kathy Hochul, endorsing her Republican opponent Lee Zeldin. The Times appears to have come up with an explanation why. A push notification sent to all subscribers was labeled, “A Political Force in New York: Challenges to the Hasidic community’s management of its schools pose a rare threat to the outsized political clout its leaders have built.”

For those who haven’t been paying attention, Zeldin has closed the gap with Hochul because of a single issue—crime. Crime rates in the state have skyrocketed over the past few years, and this is especially true in the Jewish community. Hardly a week goes by without someone dressed in traditional Hasidic garb being on the receiving end of a verbal or physical assault. When Zeldin speaks with the Jewish community, that is his primary focus.

Yet The New York Times seems to ignore this inconvenient truth, and implies that Jewish support for Zeldin is solely because of the schooling issue. Running schools as they see fit is important to many of the rabbinical leaders of these communities, but ensuring the safety of the community members themselves is far more important to them.

The same is true of The New York Times’ campaign against the ultra-Orthodox community. That’s where they start, but not where they end. Orthodox, Conservative, Reform and ultimately all Jews will not be exempt from the hostility of the left-wing media.

Jewish people can’t vote the Times editorial board out of power, but we can make a difference in who the next governor will be. It’s up to us to make the change in Albany and Washington that we deserve.

Moshe Hill is a syndicated columnist who has been featured in Daily Wire, Washington Examiner, CNS News and others. Moshe can be found at aHillWithaView.com, Facebook.com/aHillwithaView and Twitter.com/HillWithView.