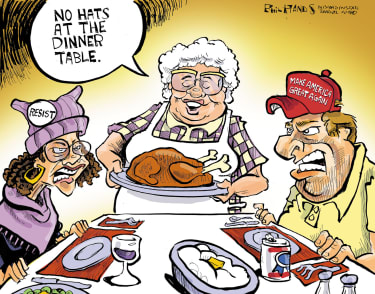 Thanksgiving is upon us, and with it comes a bevy of familial characters that you would normally avoid just to save yourself the headache.  In this joyous time of year, the wisest among us would forgo the political banter and try to keep things as civil as possible – leaving conversations on simpler things like weather, sports, or movies.

Except the weather is now climate change, sports is taking a knee, and movies are indoctrinating children into perverse social and gender ideology.  So lets create a practical guide to approaching the most delicate topics so you can put your socialist relatives who never paid for anything in their life in their place. That way they can continue blasting capitalism from their iPhones while wearing their designer jeans and driving the cars that their parents bought them without being bothered by your “facts” and “logic”.

Rule #1 – It is not your job to defend the actions of politicians.

This is a classic pitfall that many fall into when discussing politics. Donald Trump did many great things as President, but he did many many dumb things as well.  You do not need to defend him.  He’s a big boy, he can take care of himself.

However, if you happen to know the context of the attack, feel free to point that out.  Example: “Trump said there were good people on both sides, he meant white supremacists.”  You can reply with, “Do you think that Trump believes that Antifa are good people?”  The obvious answer is no.  If Trump was talking about white supremacists, then he was also talking about Antifa (the other side).  But he wasn’t, as he clearly said.

Another example: “Trump incited a riot on January 6th.”  You can begin with, “I don’t love what Trump did on and before January 6th…” because Trump’s actions and rhetoric were not great, but he did not incite a riot.  That’s clearly false.

“What is a woman?” has become a rallying cry of the common sense brigade for a reason.  The Left loves to redefine words as it suits them, but they don’t have a new definition, they just get rid of the old one.  What is marriage?  Is it between any two people?  Why not more than 2?  Why not brother and sister, or other incestuist couples?

The Left’s arguments are a house of cards.  Just keep asking until it all falls over.

Rule #3 – It’s okay to give credit where credit is due.

Hate to break it to everyone, but Joe Biden is actually a very consequential President.  Just because more than half the country dislikes him and the legislation he got through doesn’t mean he didn’t do it.  And there is a large cadre of people who like that he passed gun control, climate funding, and an infrastructure boondoggle.

White House Chief of Staff Ronald Klain put out a tweet of talking points that Biden supporters can use at the Thanksgiving table when talking to their “crazy uncle”.  It’s filled with enough half-truths and lack of context to make your head spin.  That’s what they’ll be using when bolstering their arguments.  So when they say, “Biden funded the police” or “Gas prices are down since the summer”, you can easily say that those are good things, but that’s not a success.  Sneaking in a good piece of policy in a multi-trillion dollar omnibus package doesn’t make the whole piece of legislation good.  And always remember that you can define the terms as well, like when starting to measure gas prices or inflation.  What was it in January 2021, not June 2022.

This is similar to making them define terms, but with an added wrinkle – an appeal to authority.  You must believe what they are saying because the person who told it to them has letters before or after their name and they appeared on TV.

51 intelligence operatives said the Hunter Biden laptop was fake.  Every prediction made by climate scientists has failed to come to fruition  And Covid…covid.  They got everything wrong about Covid.  Masks, vaccinations, social distancing, plastic barriers, lockdowns, mandates.  It was ALL wrong.

If they say they “did the research,” ask them if they did, or if someone on social media or cable news did it and they’re just regurgitating it.  That’s not research.

Rule #5 – Once you start getting angry, stop the conversation

This may be the hardest one, because the Left will make it personal.  They throw around terms like “sexist,” “racist,” “homophobe,” “transphobe,” and “bigot” with wanton abandon and ease.  They’ll accuse you of being in league with mass murderers if you don’t think the Second Amendemnt should be repealed.  They’ll say you’re a traitor if you pose any questions about elections.

There are plenty of hammers to attack people with, especially on their personal decisions.  Hypocrisy and double standards are a way of life.  Try as best you can to keep it as non-personal as possible.  Remember, these people will be speaking at your funeral.  You don’t want to be this guy.

A good rule of thumb is to never have a conversation with a Leftist without an audience.  There is no chance you are changing any minds at a holiday meal, but you will have people who don’t pay much attention to these issues that will be swayed.

If you do find yourself in a one-on-one conversation, know when to walk away.  When there’s a certain smugness and condescension in their tone that they have won a round, even when you think they haven’t, you know they’re not even trying to listen.  Looking down at the plebeians is something that the Left thoroughly enjoys.  Just walk away, because they are in a zone and it’s not worth your time.