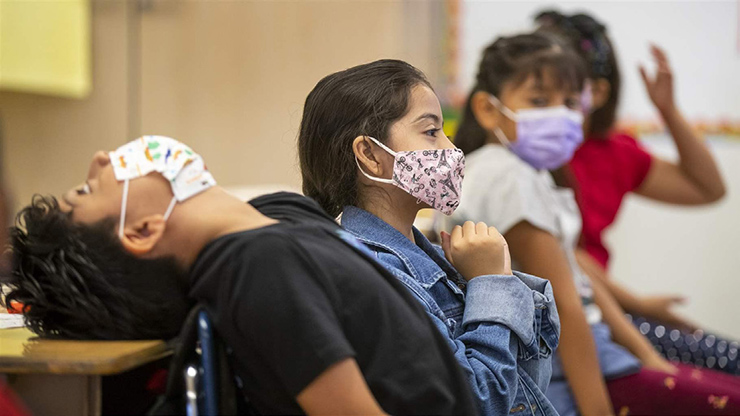 In a shocking turn of events, a New York State Supreme Court justice deemed Governor Kathy Hochul’s mask mandate for schools and public areas unconstitutional. This ruling takes away the final excuse that schools have to keep mandating the masking of children, and every parent should immediately demand that masking of their child be a decision made by them, not the school.

In the ruling, Justice Thomas Rademaker said, “There can be no question that every person in this State wishes, wants, and prays that this era of COVID ends soon and they will surely do their part to see that this is accomplished.

With a Democrat Majority in both the State Senate and Assembly, there is a strong likelihood that universal masking legislation is on its way to approval. That’s what makes it so vital for parents and schools to act now. Unmasking children should occur throughout the state, and local representatives should be made aware how unpopular it is to keep children masked.

Of course, Hochul is doubling down on the ridiculous and anti-scientific policy of masking children. The State Education Department sent an email to school districts claiming that schools must continue to follow the mask rule because “the Department of Health will appeal the Nassau County Supreme Court decision, which will result in an automatic stay that will unambiguously restore the mask rule until such time as an appellate court issues a further ruling.”

This is insanity. This is not about health, or science, or protecting children. It’s about power. Hochul made a ruling, and she will not allow some silly document like the Constitution take away her power. Schools must overrule her and dare her to do anything about it. She can’t.

Masking children as young as two years old is a phenomenon only found in deep-blue areas of the United States. When UK Prime Minister Boris Johnson famously announced that he would end masking for children last week, he meant children 12 years and older. They never had a mask mandate for preschoolers. Even European countries with strict COVID measures, like Belgium, Spain, and Italy, mandate masks to children six and older, while France starts masking kids at 11.

So, let’s go through the myths that schools have been using to keep your child masked for eight hours a day, hampering their ability to communicate, breathe, and interact with the freedom that we took for granted.

This isn’t April 2020. It’s been well established by both government doctors and private epidemiologists that any mask other than an N95 is practically useless against Omicron. If the first reaction to that is “Put kids in an N95,” you’re doubling down on stupid. There are real-world consequences to these decisions. There are mental health consequences, development delays, and learning disabilities that are occurring throughout the nation that people are now noticing. One study saw an increase of 350% in speech delays, while another saw GPA averages drop by a full half-point. Obviously, research is not very popular in these fields, as mask advocates would rather suppress truth than be told they were wrong.

Children Will Spread to Their Teachers or Parents

Omicron is everywhere. Everyone will get it. Aside from that, every teacher, parent, and grandparent has had a year to get vaxxed and boosted to their heart’s content. There has never been a righteous civilization in history who used their children as human shields to prevent themselves discomfort. It is a moral evil that we have become accustomed to, and once you see it or what it is, it becomes repulsive.

Children Are Not Vaccinated, so They Must Mask

Why? As stated, Omicron is everywhere, and vaccines do not prevent a vaccinated person from getting it. Children have never been in serious danger from COVID, even at its worst. This isn’t measles, mumps, polio, or chicken pox, which affected children at higher levels than it did adults. We’ve known for over 18 months that the younger you are, the healthier you are, the less COVID affects you. Why are we muzzling the youngest and healthiest all day, every day? So we can pat ourselves on the back and say we “did something”? That’s a failing of every adult in the state.

Children Are Adjusting, So What’s The Difference

Yes, children can adjust to difficult situations more easily than adults. Why does that mean they have to? Why does that mean that we, as adults, must deliberately put them in a situation that has no benefit to them, and can only harm them? Isn’t that morally depraved? We’re not protecting them. We are, at best, protecting ourselves (except we’re not). Hochul compared wearing a mask for eight hours a day to wearing sneakers. If Hochul can’t see the difference between covering a child’s face and covering a child’s feet, she’s even less qualified to lead the state than originally predicted.

The Government Said We Have To

That excuse is over. It’s time to think logically and morally and say “enough is enough.” Over 30 states in the country don’t require masks, as well as most other countries. New York does not produce better results than any of them; in many ways, our numbers are far worse. Aside from that, we are decimating our economy and sending our fellow New Yorkers to other states where they can be free from this tyrannical and nonsensical mandate.

It’s time for schools to start acting like adults. It’s time for parents to start fighting for their children. Unmask the children. Give them a chance to learn and grow under the same circumstances you did. Don’t let your fear cloud your judgment. Unmask them. Now.