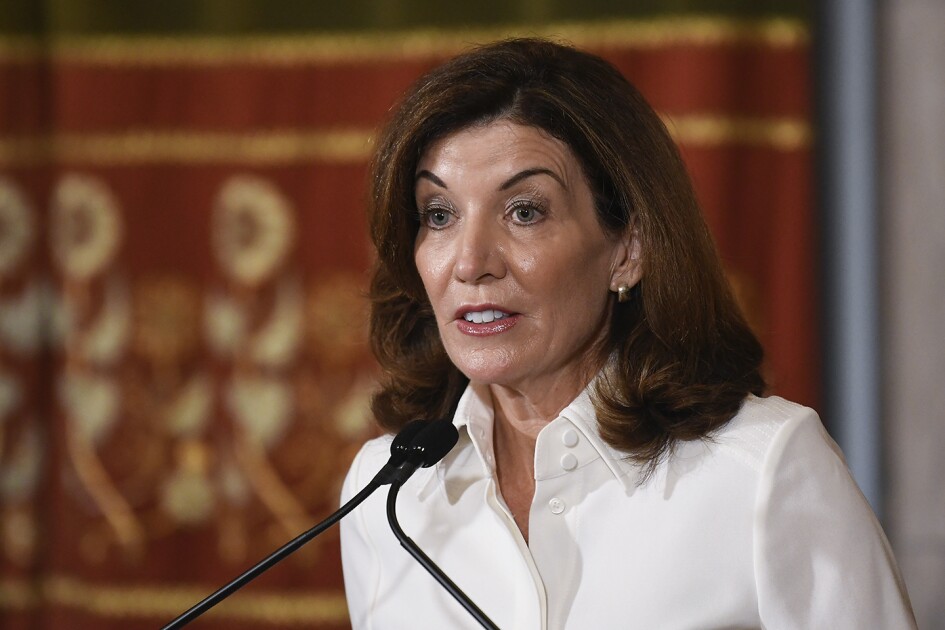 The state-imposed nightmare that New Yorkers have been living under is continuing, as Governor Kathy Hochul and her comrades continue to enact greater and greater impositions and decrees on the people who elected her predecessor.  This is not a national issue; rather it’s a local one, as states with Republican governors do not have to fear the authoritarian overreach of their ruling class. After forced masking and vaccination, the question New Yorkers must ask is: How far will they go?

Assembly Bill A416 was introduced last January, and has recently been removed from the legislative docket from its sponsor.  It seems that even New York Democrats aren’t insane enough to pass it, but it gives us a glimpse into the thought process of the most extreme wing of the Legislature.

The Bill, four pages in length, gives the Governor of New York the authority to detain anyone considered a public health risk. From the bill:

“Upon determining by clear and convincing evidence that the health of others is or may be endangered by a case, contact or carrier, or suspected case, contact or carrier of a contagious disease that, in the opinion of the governor, after consultation with the commissioner, may pose an imminent and significant threat to the public health resulting in severe morbidity or high mortality, the governor or his or her delegee, including, but not limited to the commissioner or the heads of local health departments, may order the removal and/or detention of such a person or of a group of such persons by issuing a single order, identifying such persons either by name or by a reasonably specific description of the individuals or group being detained. Such person or group of persons shall be detained in a medical facility or other appropriate facility or premises designated by the governor or his or her delegee…”

Nowhere in the bill are the phrases “imminent and significant threat,” “severe morbidity,” or “high mortality” defined.  That means that those phrases are subject to the determination of the Governor or her/his delegee.

They can detain you if you are a confirmed carrier or a suspected carrier, which means that they can take any member of your household, including children.  Remember the cries over illegal immigrant families being separated because they committed a crime?  Well, New York wants to detain their citizens for being sick.  They can administer any medical procedure they want with a court order.  Who will be asking for these court orders?  Who will be granting them?  Are there due process rights for the accused?

If you are reading this and thinking, “Well, they’re doing what they think is best for people,” you are part of the problem.  Removing all aspects of freedom and choice “for the greater good” is what tyrannical governments have been doing for centuries.

A416, which is already in the trash, is not the only bill that the Democrats are looking to pass in the coming year.  There’s A8378, which mandates COVID vaccinations to attend any school, even private ones, for any child 2 months and older. (The FDA hasn’t even approved the vaccine for children under 5.) There’s A279a, which requires healthcare providers to enter their patients’ vaccination status into a government database.  There’s A7829, which forces vaccinations for all college students.  There’s A8398, which eliminates religious exemptions. There’s A3091, which eliminates parental consent for vaccination for children 14 and older.

Assemblyman Patrick Burke announced on social media in November that he was planning on introducing a bill that “allows insurance providers to deny coverage for COVID related treatment to those who refuse to be vaccinated.”  Burke, of course, has previously been a proponent of socialized healthcare and claimed that healthcare is a human right. When this was pointed out, the irony was lost on his and his comrades.

This is tyrannical fascistic behavior, pure and simple.  We have become so re-normalized to such authoritarian action by the Democrats in Albany and Washington that something like this may not shock anymore.  But this is shocking.

The State Legislature is one thing; they at least have some form of gridlock that will prevent some, if not all, of these measures.  The Governor’s office is another problem entirely.  When Governor Hochul announce her latest restrictive measures, many New York counties said they would not enforce her mandates.  Hochul announced this week that she will provide $65 million to counties to help them enforce the mandate.  She’s using taxpayer money to hire the Gestapo.

This is already occurring in some form in Western Democracies like Australia, Germany, Austria, and other European countries. It is not far-fetched to believe that states like California, Oregon, and New York would consider forceful measures to deal with a noncompliant citizenry.

As we enter 2022, New Yorkers need to ask themselves two questions.  First: Does the government have the ability to eradicate this virus?  The answer, according to numerous health officials including Dr. Anthony Fauci, is no.  This is an endemic that will hit you regardless of masking or vaccination status.  It’s a two-foot fence trying to contain a six-foot horse. It can jump over at any point.  Given that, the second question is: Are they going to admit that they cannot eradicate the virus and learn to manage it?

The current administration will not do that.  They love the power this virus gives them too much.  New Yorkers must keep that in the forefront of their mind if they decide to continue with this insanity or if they truly want to get back to normal.  We are at an inflection point in our nation’s history, and what we do now will have ramifications for generations to come.  Willfully giving up our freedom to choose for ourselves out of fear is also taking away that freedom from our children and grandchildren.  Because once it’s gone, it’s not coming back.