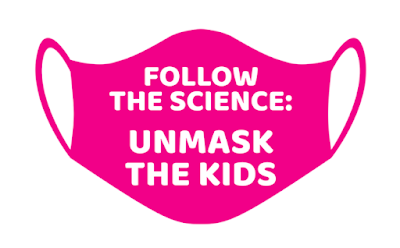 It’s time to put an end to this.  No more masking our children.  No more quarantining a whole class when there’s a positive test.  No more demands to vaccinate.  No more bans on parents entering the buildings.  If it wasn’t done in 2019, it should not be done in 2022.

Seriously, enough is enough.  Schools, shuls, and everything in-between need to stop taking the rules placed by petty tyrants in Albany, Washington, and beyond seriously.  They certainly don’t take themselves seriously.  How many examples do we need to see of Democrats partying in the free state of Florida before we say enough?  How many Democrats get to go clubbing, or to a concert, or a restaurant without social distancing or masking before the plebeians demand equal treatment?

It’s been revealed this week what many who consume non-legacy media have known for over a year now: Nearly everything the CDC, Department of Health, and other institutions have said has been a lie.  This is not hyperbole. Elle Reynolds, writing for the Federalist, sums it up perfectly: “The COVID bureaucracy has spent two years now preaching lies, censoring anyone who challenges the lies, and eventually coming around to admit the same truths they previously denounced.” Three of those lies were openly admitted by CDC Director Rochelle Walensky alone.

First, she told Good Morning America, “the overwhelming number of deaths, over 75 percent, occurred in people who had at least four comorbidities.” That is an astonishing admission.  That means that unless you have multiplecomorbidities, you never had to seriously fear this virus.  How many trips were canceled, confrontations had, or missed opportunities did every single person have because we did not properly manage COVID?

Don’t blame this on ignorance.  That argument could have worked in 2020, maybe even a few months into 2021.  But the job of everyone who institutes public policy is to figure out what works, not double down on what doesn’t.  All anyone needed to do was look over at Sweden to figure out what’s been working for them the entire time, which was to protect the elderly and let everyone else live their lives.  In terms of deaths per million population, Sweden ranks 57th (according to Worldometers), just below Austria.  Austria has some of the strictest lockdown measures in the world.

Second, Dr. Walensky told Fox News’ Bret Baier that the “data will be forthcoming” when asked how many people have died from COVID as opposed to with COVID.  This should be the number one distinction when discussing COVID deaths.  Dying from COVID is a big deal.  Dying with COVID is a coincidence.

How far off could the numbers be?  Consider that the “official” death toll from the CDC (at the time of this writing) is 835,302.  That is the largest official number in the world by a fairly wide margin.  In the most literal sense of the word, it’s unbelievable.  Now take into consideration the information provided by the New York State Department of Health last Friday.  An astonishing 43% of statewide hospitalizations are with COVID, meaning that they came to the hospital for a different reason, were given a COVID test, and the results were positive.  Within that statewide statistic, an unbelievable 51% of New York City COVID hospitalizations were with COVID, not from COVID.  Let’s say that statistic holds true, the true COVID fatalities in the United States is far lower than the much ballyhooed 835,000 statistic.

The third admission from Walensky came last August, but is getting re-circulated after this weekend’s revelations.  She told CNN’s Wolf Blitzer, “Our vaccines are working exceptionally well … but what they can’t do anymore is prevent transmission.”  Vaccines do not prevent transmission.  This is from August, four months before Omicron.  It doesn’t matter where you are in the nation – in a high or low vaccination area – the vaccines are useless against Omicron.

In fact, calling them “vaccines” seems to be misinformation.  They are a preventative therapeutic. If you are vaccinated, then when (not if) you get COVID, you have already taken medicine you need to fight off the virus.  If you are not vaccinated, then you can take other medicines at that point.  It’s that simple.

So not only is COVID not as deadly as we thought, it doesn’t seriously affect as many people as we thought, and the vaccine doesn’t prevent transmission like we thought, all the false idols around this pandemic are being smashed.  That just leaves the largest one of all: masks.

The science around masking is practically non-existent.  The CDC’s own page on the subject reads like a propaganda pamphlet, with “evidence” that is laughable to anyone even mildly familiar with the subject. That being said, even if you take the CDC at their word (which is a vanishingly small number of people), their latest information was published in the beginning of December, which doesn’t take Omicron into account.  Lab tests show Omicron to be 70 times more transmissible than Delta.  A glance at any map of cases in the United States will show that regardless of mask mandate or not, Omicron has gotten through.  Nothing can be done to stop it.

So this open letter is aimed at two audiences.  First, the powers-that-be in the Jewish institutions where our children are sent and our prayers are made: Stop it.  If you have vaccine demands or mask requirements, end them now.  They are useless.  You might as well erect a statue of Dr. Anthony Fauci and pray to it for all the good it’ll do.  Second, to the parents of the students and the members of the synagogues: Demand action from your leaders. Don’t thank them for taking harsh measures because “they’re doing what they feel is best.”  Demand they behave rationally and lead normally.  We owe it to ourselves and our children.

Enough is enough.  Beating this pandemic is impossible.  Learn to live with it.  Make 2022 the year we said “no” to the fear, paranoia, hypochondria, and lies that have overwhelmed our society for far too long.  Go back to normal.  Now.