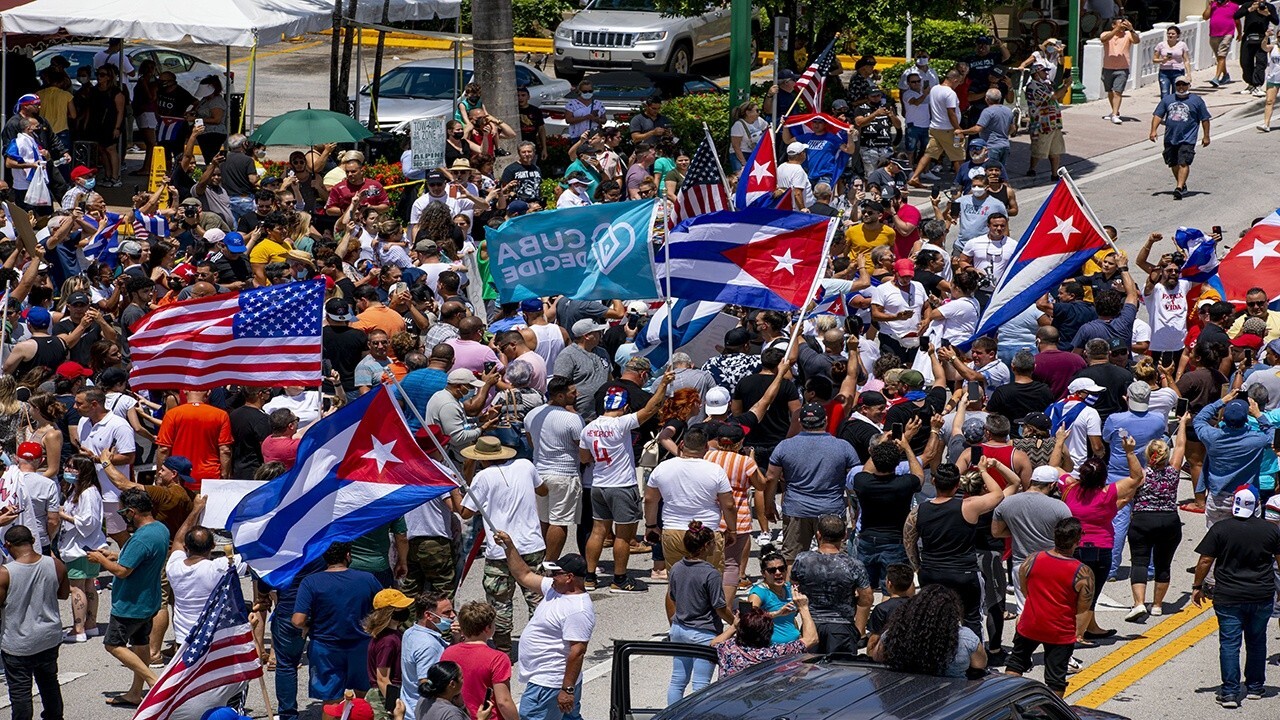 This past weekend, tens of thousands of Cubans took to the streets to demand an end of the dictatorship that has ruled their lives for three generations.  Waving American flags and chanting “Freedom,” these Cuban dissidents are risking their lives to have a hope of liberty. Meanwhile, the Left in the United States is increasing its march towards tyranny.

After failing to meet its July 4th vaccination goal, the Biden administration has grown increasingly frustrated with the American people.  Since the beginning of the pandemic, the federal and state governments have infantilized their constituents, and they view vaccine hesitancy like a parent would a rebellious teenager.  Former Obama Health Secretary Kathleen Sebelius wants schools and businesses to require vaccination. “I’m trying to restrain myself, but I’ve kind of had it,” she said. “You know, we’re going to tiptoe around mandates; it’s like, come on. I’m kind of over that. I want to make sure that people I deal with don’t have it so I don’t transmit it to my granddaughter.”

Dr. Anthony Fauci said it was “horrifying” when he heard people didn’t want to get vaccinated.  “There’s no reason not to get vaccinated,” he told Jake Tapper.  He is including all Americans above the age of 12 in this comment, despite the fact that the vaccine does not have the same effect on everyone.  Age and comorbidities account for a significant number of the deaths from COVID, and if a teenager doesn’t want the deleterious effects of a vaccination, they shouldn’t be forced to get one.

That is not stopping Joe Biden, who said that “We need to go to community-by-community, neighborhood-by-neighborhood and, often times, door-to-door, literally knocking on doors to get help to the remaining people protected from the virus.” White House Press Secretary Jen Psaki elaborated by saying that “we are going to continue to press to get 12- to 18-year-olds vaccinated, to continue to work with communities where there’s lower vaccination rates. That’s one of the reasons we initiated these strike forces to go into communities and work with them to determine what they need.”

If that wasn’t enough, the Democrats are pressuring social media and phone carriers to crack down on “misinformation” regarding vaccinations.  They literally want to have private companies determine what information you can and cannot have, and that extends into text messages. These are the same entities that banned all posts blaming the origins of the virus on the lab leak in Wuhan, suppressed medical reports that hydroxychloroquine could reduce symptoms, and removed content that did not conform with the narrative.  They have no credibility to determine what is “misinformation.”

Meanwhile, Democrats in Texas are subverting the democratic process by bailing out of their responsibilities as members of the State House of Representatives. Instead of voting on a voter security bill, Democrats hopped on a private plane to Washington, DC to ensure that the House didn’t have a quorum to hold a vote.  Vice President Harris, who claims that the Senate Minority Republicans are a threat to democracy when using the filibuster, praised the Texas Democrats.  “I applaud them standing for the rights of all Americans and all Texans to express their voice through their vote,” she said. So when Senate Republicans reject a bill to radically shift the way elections are done in the country, Kamala Harris is appalled by their actions, but Texas Democrats literally running away so they can subvert the process are worthy of applause.

Meanwhile, in Charlottesville, Virginia, history is being removed one statue at a time.  Robert E Lee and Thomas J “Stonewall” Jackson were the first to go, but now they city removed a statue of explorers Lewis and Clark and their guide, Sacajawea, as well.  A country that seeks to forget its history is actually seeking to rewrite that history as they see fit.

And what history do the Democrats want?  The one espoused by Critical Race Theorists, which is actually activism disguised as history.  The National Education Association (NEA), the nation’s largest teachers union, announced its plan to teach Critical Race Theory in 14,000 school districts in all 50 states.  If state laws ban it, the NEA will fight it in court – just so they can teach children Howard Zinn propaganda on how evil America is without any context.

This is the tyranny that is encroaching on Americans just this past week.  The Left has spent decades taking over nearly every institution in American life, and they have positioned themselves to strike.  Cubans have been on the losing end of dictatorship for 60 years, and they finally have been able to take to the streets to try and end it.  Will Americans take that long to take their country back?  Or will they say no to the Democrats taking over their legislative process, their education, and their health?