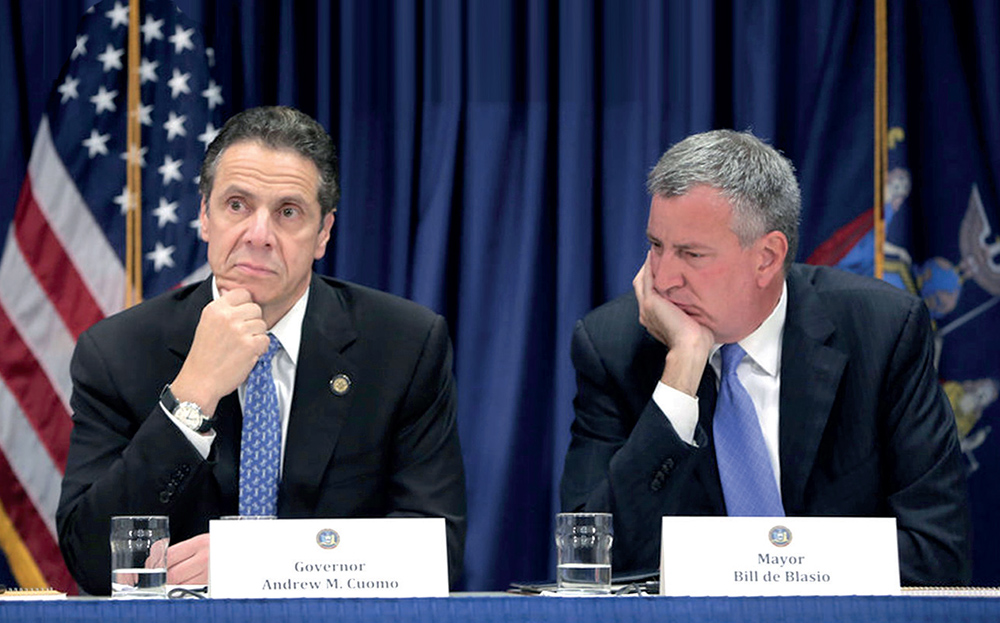 Governor Andrew Cuomo, Mayor Bill de Blasio, Attorney General Letitia James, and others have been named as defendants in a lawsuit filed by Bais Yaakov Ateres Miriam (BYAM) of Far Rockaway. The suit claims that Cuomo has violated their constitutional rights and specifically targeted the Orthodox Jewish community when implementing his latest series of lockdowns.

Filed by Yitzchok Lebovitz and Chana Shapiro-Lebovitz on behalf of their daughters, the 33-page complaint breaks down their compliance with the Governor’s office to date, the need for in-person learning, and the comments made by Cuomo that show that this is targeted discrimination against the Jewish community.

School closure, the suit argues, is unnecessary, as “the Governor himself openly admits” that COVID-19 is “not being spread by schools,” and the Mayor agrees that there has been “very little coronavirus activity” in schools and “there is not a single other state whose protocols require school closures for the COVID-19 levels that have been used to justify the current shutdown.” School closure, therefore, is due to “religious targeting of the Orthodox, a charge the government actually admits,” and “fear.”

Putting aside the religious targeting for a moment, Cuomo has admitted that “these closures are not driven by public health,” but by “fear” of people “losing confidence” in the City and “moving out.” Cuomo said at a press conference on October 5: “You could say there’s a better way to do this. I know. But we’re dealing with emotion and fear as much as anything. And I’ll tell you, it’s New York City, we have a real problem with fear and anxiety, and people losing confidence in the city…and who’s afraid. So it is a blunt policy, I agree with you, but at this point I don’t think that we can do anything more sophisticated.”

The Democratic Party in general, and Cuomo in particular, have consistently claimed that they “follow the science.” This is simply not true, as the World Health Organization spokesman recently said that they do not view lockdowns as the “primary means to control the virus.” Lockdowns are meant to prevent overrunning the hospitals, something that is not in danger at the moment.

In July, the BYAM spent approximately $12,000 to comply with state orders for re-opening. They argue that in-person learning is necessary, both practically and religiously. Practically, student retention drops and children regress in a distance learning setting. Religious activities such as prayer and learning are intended to be done in a group setting. “On July 31, 2020,” the suit claims, “BYAM submitted its individual reopening plan. To date, the State has not notified BYAM that modifications are necessary to BYAM’s reopening plan to ensure compliance with the State’s guidance.” An example is provided to demonstrate how their stringent protocols prevented a COVID-positive student from attending school well before a test was administered.

The suit lays out a detailed case that the Orthodox Jewish community is being religiously targeted. De Blasio’s closure plan did not include houses of worship, but did include schools, despite an admission by the Mayor that “we have seen very little coronavirus activity in… schools.” Cuomo rejected that plan in part because the religious institutions were not closed.

In the subsequent press conference and phone calls, Cuomo has made many statements regarding the Jewish community. In an October 5 press conference, Cuomo said that he was “going to meet with members of the ultra-Orthodox community” and tell them “[i]f you’re not willing to live with these rules then I’m going to close the synagogues.” To demonstrate the need for closures and that “religious gatherings” are the source of the COVID spike, Cuomo displayed two photographs. Both pictures were gatherings of Orthodox Jews; however, one of them had in fact been taken at a funeral in upstate New York in 2006. Cuomo admitted, on October 9, that, as the lawsuit asserts, “the red and orange zones were specifically drawn to capture Orthodox Jewish neighborhoods” when he said, “we have a couple of unique clusters, frankly, which are more religious organizations, and that’s what we’re targeting.”

When confronted with these issues, Cuomo dismisses them by blaming his favorite target, President Trump. “Look, the president fans division. He does. He always has, started in Charlottesville with KKK there are good people on both sides. No. The KKK is not good. Racism is not good. Discrimination is not good. Kidnapping is not good. Violence is not good. I see it here in New York with the political interference with this ultra-Orthodox community that we have on our clusters. I believe that I have evidence that the Trump campaign is fueling their opposition and their divisiveness.” Not only does Cuomo push the oft-debunked lie about the President’s statements in Charlottesville, he compares Orthodox Jews to the KKK and claims that their opposition to his closures is purely political, not motivated by religious freedom. “The enforcement from the local governments is very uneven, especially when it’s politically sensitive,” Cuomo said. “And that’s what we’re running to with a lot of these ultra-Orthodox communities, who are also very politically powerful, don’t kid yourself.”

Cuomo falsely claimed that the Jewish community does not comply with state orders. “Some of the complexity on the enforcement here,” Cuomo said, “especially with members of the ultra-Orthodox community – they have never complied with the rules and I have had dozens and dozens of conversations.” As stated previously, BYAM submitted a comprehensive plan in July to reopen schools.

It’s unfortunate that many in the Jewish community who saw no issue with massive gatherings to protest racism, will ultimately blame the ultra-Orthodox community for failing to comply with certain COVID guidelines. That is simply blaming the victim. The Jewish community has demonstrated for the past seven months that they are willing to comply with the same rules that apply to everyone, but they will not sit idly by when they are specifically targeted. Nor should they. Regardless of religious affiliation, all New Yorkers who respect freedom, religious liberty, and equal protection under the law should join the Lebovitzes and Bais Yaakov and their stand against the tyrannical New York government.