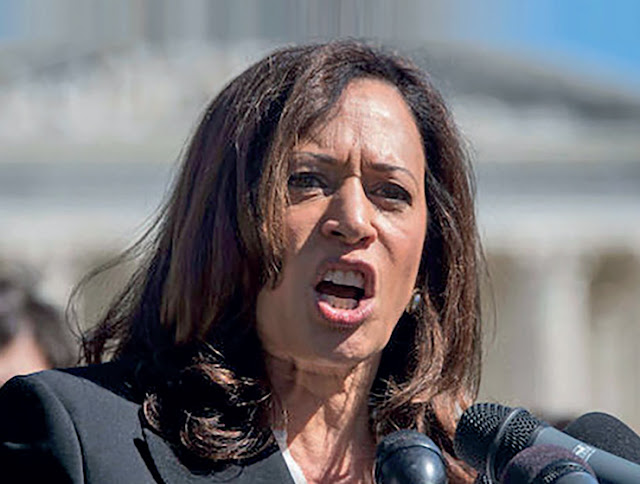 Last week, Joe Biden picked who is running in his stead against Donald Trump, and it’s the radical leftist Senator from California Kamala Harris. Yes, the same Kamala Harris who insinuated that Biden was a racist, and said she believed his sexual assault victim is now the successor to the man who called himself a “transition” candidate and who the majority of voters don’t think will make it through his first term.

The nation’s Democrats have already formed opinions about Harris, and they were not good. At her primary peak in July 2019, she was in a three-way tie for second place with Bernie Sanders and Elizabeth Warren at 15%, but she mostly hovered in the single digits. She dropped out before the first ballot was cast because she was out of money and the polling in her home state of California was at 7%. The media reaction to her dropout was a mixture of criticism of her campaign prowess and lamenting the sexism and racism of America (or, really, the Democratic Primary voters) for not supporting a woman of color.

Harris has now been given the proverbial keys to the kingdom. According to a Rasmussen poll, 59% of voters, Democrat, Republican, and Independent, believe that the 77-year-old Biden will not finish his first term. This means that 59% of respondents are essentially admitting to a Kamala Harris presidency. Broken down by party affiliation, 49% of Democrats, 73% of Republicans, and 57% of Independents believe that, should Biden prevail in November, Harris will be president by the end of 2024.

This means that Joe Biden is a Trojan horse candidate, and Kamala Harris is the wolf in Biden skin. So it’s much more important for the voters to know far more about Harris than they’ve needed to know about any Vice Presidential pick in the last century, maybe more.

First, the lie that Harris is a “pragmatic moderate,” as headlined by The New York Times, is easily debunked. Her GovTrack report card for 2019 lists her as the most leftwing Senator, ahead of Bernie Sanders and Elizabeth Warren – hardly a moderate. As for pragmatism, she co-sponsored the eighth most bills of all Senators, but she joined fewer bi-partisan bills than any other Democrat. Basically, she co-sponsors Democrat bills in a Republican-majority Senate, and does not work across the aisle. She also missed 61.9% of her votes in 2019, third most of all Senators.

More specifically, on key votes in her short Senate career (which began in 2017), Harris has voted against the Born-Alive Abortion Survivors Act, against the USMCA, and against Marco Rubio’s pro-Israel, anti-BDS bill. She has expressed interest in rejoining the Iran deal. She has flip-flopped on healthcare so often that the only thing we know for certain is that she wants to give free healthcare to illegal aliens, but she has mentioned that she would ban private insurance (she has, for now, backed off that position). She supports the Green New Deal, which will bankrupt the country and not affect climate change. She also said she would ban fracking, which has caused a massive reduction in carbon emissions and made the United States energy-independent.

As the Attorney General of California and District Attorney of San Francisco, she repeatedly put politics over the law. She refused to defend California state law stating that marriage is between a man and a woman. She bowed to unions to undermine a buyout of six hospitals, so the hospitals closed and the communities suffered (there is a lawsuit that claims that the union promised her $25 million for this). When Planned Parenthood was caught by an undercover journalist for discussing the illegal sale of dead baby body parts, Harris sued the journalist. Unsurprisingly, Planned Parenthood has donated $80,000 to her campaigns. When she was DA of San Francisco, Harris did not disclose exculpatory evidence, which affected a man on death row and over a thousand others.

Then there’s how she treats her enemies. Kamala Harris was the face of the Brett Kavanaugh witch-hunt, much like Joe Biden was the face of the Clarence Thomas witch-hunt. Not only did she falsely accuse Kavanaugh of sexual assault, she insinuated, without any evidence, that he was part of a Russian conspiracy cover-up. She never followed up on her allegations.

Harris’s wildly leftist politics may not hurt her or the Biden/Harris ticket. According to Pew Research, 56% of Biden voters say they are voting for him because “he is not Trump,” compared to 19% of Trump voters whose main reason is because “he is not Biden.” This means that, for all intents and purposes, ballots are being cast out of spite for President Trump. Every voter should think about the future direction of this country if his or her vote is cast out of contempt and animus instead of what is truly best for the United States going forward. Given the turmoil in the streets of Democrat-run cities, the main question that voters should ask is: Who will stand up to the mob, and who will bow down before it? Neither Biden nor Harris has the personal will or the political power to take on the forces that are tearing this country apart. Hopefully, President Trump can stay disciplined enough on the campaign trail to show the American people the right way.

Moshe Hill is a political analyst who has written for The Daily Wire, the Queens Jewish Link, The Jewish Link of New Jersey and JNS.org. He is regularly featured on ‘The Josh M Show’ podcast. Subscribe to aHillwithaview.com for more content from Moshe Hill. Like him on Facebook at facebook.com/ahillwithaview and follow him on Twitter @TheMoHill