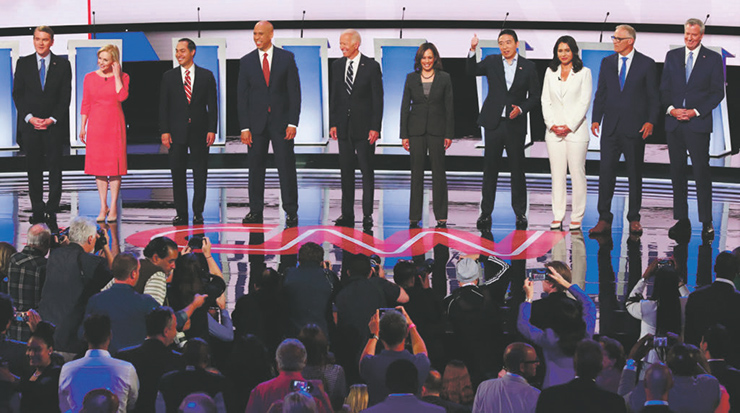 The third Democratic debate was last week, and in the two and a half hours, many topics were discussed. Healthcare, guns, China, education, and of course, Trump, were just some of the flashpoints of argument between the candidates. One topic that wasn’t discussed at all, and barely discussed in the ten hours of debate so far in 2019, was the Middle East and Israel.
A fair question to ask should be: Why should Israel or the Middle East be a topic in the debates at all? There is an accepted premise among the political intelligentsia that Presidential political winners are not chosen based on a strong foreign policy – rather, on domestic issues. Nonetheless, foreign issues, like China and Russia, have been on the table in all three debates so far, just not Israel.
Nor is this much of an aberration from the first three Democratic Primary debates of 2016 and 2008. Israel has been mentioned in both of those, but barely, and only in conjunction with other Middle East issues. In 2008, the Iraq War was a major issue, and every Democrat was tripping over each other to attack President Bush for his policy there. In 2016, ISIS was a major threat in the world, but the Democrats couldn’t say much because ISIS thrived under President Obama’s administration, and they didn’t want to go against him. The same is true with the Iran Nuclear Deal, which was briefly mentioned because so many Republicans said they would exit the deal if elected (which President Trump eventually did). The only mentions of Israel were incredibly succinct, merely affirming that Israel is an ally.
Does Israel deserve to be in the Democratic debates of 2020, given these facts? Sadly, yes, as the greatest rift within the Democratic Party ranks is Israel. Ideally, Israel would be a bi-partisan issue that flies under the radar of Presidential politics, so they can continue to operate as they see fit without the scrutiny of the American media, which has a terrible track record at fairly covering the Jewish state. However, this year is different, and everyone who hasn’t been living under a rock for the past year knows why: 2019 is the year of “The Squad.”

Leading the anti-Israel charge in the “Squad” are Ilhan Omar and Rashida Tlaib. Normally, the ravings of two Members of Congress would be far beneath the notice of Presidential candidates. These, however, are not ordinary Members of Congress. Omar especially has made headlines with her anti-Semitism, which the media spins into “starting a serious talk about Israel.”
Both Omar and Tlaib were subjects of international controversy surrounding their intended visit to Israel, or to be more accurate (according to their itinerary), their “Congressional Delegation to Palestine.” When Israel denied them entry, it was a national news story, only to be topped when Tlaib decided to not accept Israel’s offer of entry to visit her family. Tlaib’s entry was contingent on the promise that she would not advocate boycotts against Israel while she was there – something she initially agreed to, but found too difficult to put on hold while she visited her elderly grandmother.
President Trump’s tenure has also yielded historical advances in the US-Israel relationship, primarily the fulfilled promise of relocating the American embassy to the capital of Israel, Jerusalem. Presidents Clinton, Bush (43), and Obama all promised to do so and failed to keep that promise. Many Democrats, Bernie Sanders prominently among them, opposed the move. Trump also recognized Israel’s sovereignty over the Golan Heights, and dealt with Israel’s right to defend herself – wildly different from his predecessor. Trump even attempted to make Israel a greater focus of the Democratic primary when he publicly maligned Omar and Tlaib, wondering if American Jews who voted Democrat were “disloyal” to the State of Israel and Judaism in general.
Given that the 2020 election in general, and the debates specifically, are focused on differentiating the Democrats from Trump and from each other, Israel is a great way of doing that. This is because many of the Democratic frontrunners have a vastly different approach to Israel than President Trump does. This was demonstrated by the rabidly anti-Israel group IfNotNow, when they approached many presidential candidates in recent months to have them promise to change American foreign policy in relation to Israel.
Bernie Sanders and Elizabeth Warren are the greatest allies so far of the anti-Israel left, Warren actually hiring IfNotNow co-founder Max Berger as a foreign policy advisor. They both gave firm commitments to “ending the occupation.” Pete Buttigieg and Joe Biden both agreed that the occupation must end, but were not as firm in their commitments. To their credit, Cory Booker and Beto O’Rourke refused to use the term “occupation” when discussing the US-Israel relationship.
Legislatively, the Democrat presidential candidates differ from both Democrats and Republicans. Cory Booker, Kamala Harris, Elizabeth Warren, and Bernie Sanders all voted against S.1, which included the “Combating BDS Act of 2019.” Although she wasn’t on the third debate stage, Tulsi Gabbard is a co-sponsor of Ilhan Omar’s pro-BDS bill, which compares Israel to Nazi Germany and apartheid South Africa. Bernie Sanders, Elizabeth Warren, and Beto O’Rourke all chose to boycott Prime Minister Benjamin Netanyahu’s speech to a joint session of Congress in 2015 to warn them about signing the Iran Nuclear Deal.
These differences from Trump and from each other alone makes Israel a legitimate topic of debate, but the frequent attacks by highly visible and increasingly prominent Democrats is the icing on the proverbial cake for providing information to the primary voters. These voters deserve to know where the candidates who are hoping to earn their vote stand on the issues.
In a poll conducted by J Street, another anti-Israel organization, which parades as a pro-Israel one, nearly 60 percent of Democratic primary voters follow the Israeli-Palestinian conflict either “somewhat closely” or “very closely.” These primary voters care about Israelis and Palestinians, have a negative view of Netanyahu, and want a candidate who supports cooperation between the two sides.
All of this comes to the conclusion that at least one question, over hours of debate, should be thrown at the candidates, but there wasn’t. This is for the same reason why the Democratic National Committee did not want a full debate on climate change: There are no good answers. The Democrats have no legitimate policy proposals that can appeal to the voters in a general election. The only solid talking points come from the extreme left wing of Sanders and Warren, and those are incredibly unpopular. Debating Israel would only give points to Trump, and that is because the Republicans recognize a simple truth: The problems with Palestinians have nothing to do with Israel. When the Palestinians overthrow their terrorist leaders and truly want to come to the table, Israel will be there with open arms. Until then, the only legitimate policy is defense.
The Democrats can’t say this, because according to the socialist left (who will decide the next Democratic candidate), there is no problem too big or too small that massive government intervention can’t solve. Allowing the Israeli government to handle their issues their way is unspeakable to a 2020 Democrat, so instead of tackling an issue head on, they are avoiding it. Let’s see how long they can keep that up when they are on a debate stage with President Trump.
Moshe Hill is a political analyst who has written for The Daily Wire, The Queens Jewish Link, The Jewish Link of New Jersey and JNS.org. He is regularly featured on “The Josh M Show” podcast. Subscribe to aHillwithaview.com for more content from Moshe Hill. Like him on Facebook at facebook.com/ahillwithaview and follow on Twitter @TheMoHill.