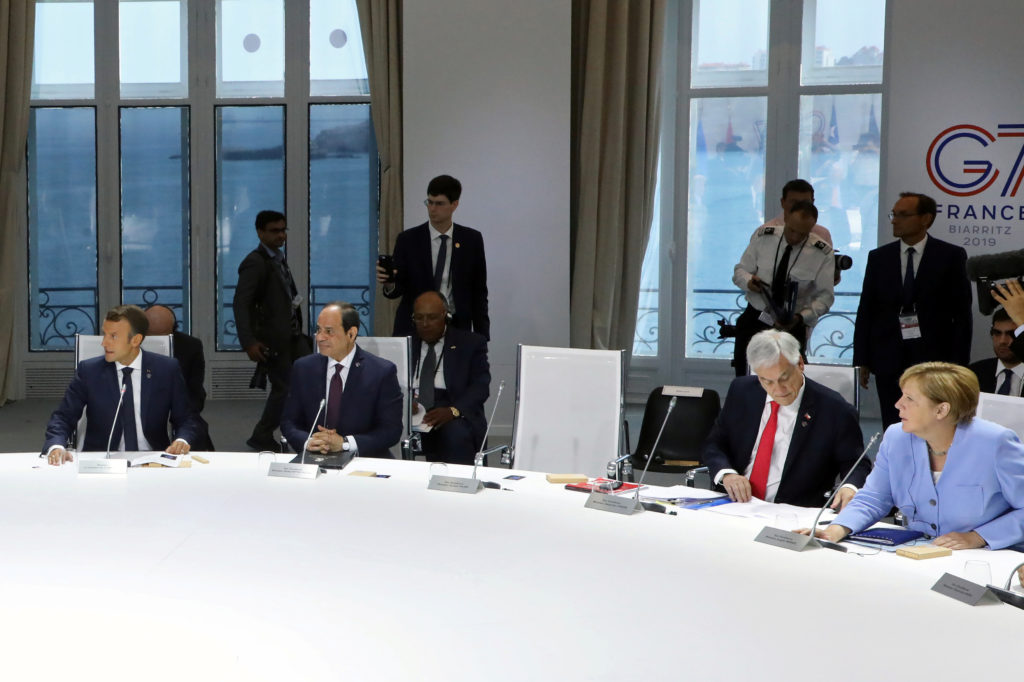 The G7 Summit in France ended with a Climate Change discussion that Trump did not attend.  Predictably, the Democrats and their political operative (a.k.a. The mainstream media), used this opportunity to exclaim that President Trump does not take the issue of Climate Change seriously enough.  The fact is, nobody is actually looking for solutions to climate change, rather choosing to wield this issue like so many others as a political club to bash the other side with.
The Democrats do not take climate change seriously at all.  This is obvious in both action and policy.  Earlier this year, elitists from around the world gathered in Davos, Switzerland, to lecture the plebeians on how the planet is dying from excessive use of fossil fuels.  To show their commitment to the cause, one could assume that these world leaders and billionaires arrived in the most fuel-efficient way possible.  That very notion is laughable, as around 1,500 private jets landed in Davos for the summit.  The carbon footprint is highest among those who preach the end of carbon emissions.
This became more obvious this week, when the news broke that the Obama’s were buying a $15 million vacation home in Martha’s Vineyard.  The 8-bathroom, 7-bedroom home has an enormous carbon footprint, so the emissions coming from the President who signed onto the Paris Accords is excessively higher than “necessary”.  This stunning hypocrisy comes from the man who claimed that his nomination as the Democratic Presidential candidate  was “the moment when the rise of the oceans began to slow and our planet began to heal”.  He must truly believe that, because according to climate alarmists that he and the Democrats follow, his house will be underwater in a few years.
Bernie Sanders can’t even last an entire speech with a solid climate principle. “It’s no secret that we must transition away from fossil fuel. Period. End of discussion,” Sanders said at a campaign event last week.  “There ain’t no middle ground. There is no middle ground.”  In that very same speech, an audience member asked how he plans to get around the country and the world as President without fossil fuels.  Sanders meekly replied, “No, I’m not going to walk to California… I’m not going to sit here and tell you that we’re not going to use fossil fuels.”  In a manner of minutes, Sanders moved his position from “no middle ground” to an obvious middle ground.
For all the rhetoric that Climate Change is the most existential threat of our time, the Democratic National Committee is desperate to keep specifics about policy proposals quiet.  This is because they know that asking the American people for major economical sacrifices on the backs of the always-wrong predictions of the climate community (not the scientists who are studying the climate, rather the activists who are alarmists about climate change) is a losing strategy.  This explains why not one Democratic Senator voted for the Green New Deal, and there has been no vote for it in the Democratically controlled House of Representatives.
This also explains why the Democrats voted down a proposal to have a Climate-centric debate for their candidates, where they must all explain what they will do to curb this upcoming catastrophe that they’ve been promising for the past 5 decades.  Which is unfortunate, because it would have been amusing watching the candidates discuss for an hour why voters in the swing states of Pennsylvania and Ohio should lose their jobs or defend a Green New Deal that they didn’t vote for and has been estimated in the QUADrillions.
In order to virtue signal, CNN is holding a SEVEN HOUR town hall event, long enough to give 10 candidates 40 minutes each to discuss climate change.  This is a ratings move by CNN, but will be a disaster for the Democrats, and they know it.  The DNC is right to not want their candidates talking about this issue for too long.  The only outcomes from this monstrosity of an event will be pie in the sky “solutions” that will destroy the economy or meek responses that will cause the leftist base to erupt in anger.  It’s a lose-lose situation, because nobody is willing to offer practical solutions to the centrist voter.  Since they are all trying to garner the most extremist voting base, who come out in higher numbers than moderate Democrats, whatever they say will be used against them in the general election.  When they back down from their rhetoric and moderate to a more “practical” solution, that’s when the American people will see that the Democrats are not serious about this issue.  If they were, they would have pushed for that practicality all along.
Anyone who is worried about Climate Change actively looks at the Dmeocratic Party for their policies and guidance on the issue, but perhaps they are looking in the wrong place.  The greatest cause of carbon emissions reductions has been innovation.  Technologies such as clean coal and fracking have led the way for the United States to lead the world in lowering emissions for years.  Removing regulatory barriers for small businesses and entrepreneurs will allow the next great technology that will replace fossil fuels to thrive.  The rhetoric coming from the Democrats may, at times, sound nice, but they have no legitimate plan to combat anything.  They just want votes.
Moshe Hill is a political analyst who has written for The Daily Wire, The Queens Jewish Link, The Jewish Link of New Jersey and JNS.org. He is regularly featured on ‘The Josh M Show’ podcast. Subscribe to aHillwithaview.com for more content from Moshe Hill. Like him on Facebook at facebook.com/ahillwithaview and follow on Twitter @TheMoHill.