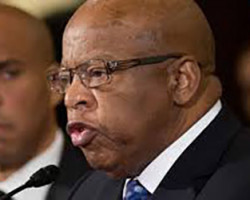 In response to a bipartisan House resolution that sought to combat the anti-Semitic BDS movement, Representative Ilhan Omar (D-MN) introduced her own pro-BDS resolution. The resolution has its allies and opponents. Counted among the allies are civil rights icon Rep. John Lewis (D-GA) and two New Jersey Representatives, Rep. Bonnie Watson Coleman (D-NJ-12) and Rep. Donald M. Payne, Jr. (D-NJ-10). Amongst the opponents of this pro-BDS resolution is NORPAC, who wrote an open letter to Rep. Lewis, and the Trump administration’s State Department, who made a move this week directed at the resolution.
In the open letter, NORPAC’s national president Dr. Ben Chouake asked Congressman Lewis to withdraw his sponsorship of House Resolution 496. This resolution, deceptively titled as “Affirming that all Americans have the right to participate in boycotts in pursuit of civil and human rights at home and abroad, as protected by the First Amendment to the Constitution,” is clearly targeted at the BDS movement. The resolution lauds past boycotts, and effectively compared Israel to Nazi Germany, apartheid South Africa, and other egregious human rights violaters in history.
The letter to Lewis outlines his heroism in the civil rights movement of the 1960s, calling him “a national symbol of the tireless fight against bigotry and racism.” Lewis’ history of fighting against bigtory and discrimination is surely why he co-sponsored and voted for the anti-BDS bill, which passed the House in a rare bipartisan vote 398-17. “The BDS movement is the demonization, delegitimization, and application of a double standard against Israel and the Jewish people,” Dr. Ben writes. “Many of the founding goals of the BDS movement include denying the Jewish people the universal right of self-determination, and many of the strategies employed in BDS campaigns are anti-Semitic.” It seems that Rep. Lewis’ principles align with that of those fighting the BDS movement.
Senator Marco Rubio addressed the First Amendment concerns in a February op-ed for The New York Times when the issue came up for his Senate bill (S.1, passed 77-23), which included the “Combating BDS Act of 2019.” “The problem is that there are no such [First Amendment] rights,” Rubio wrote. “While the First Amendment protects the right of individuals to free speech, it does not protect the right of entities to engage in discriminatory conduct. Moreover, state governments have the right to set contracting and investment policies, including policies that exclude companies engaged in discriminatory commercial- or investment-related conduct targeting Israel.” The NORPAC letter addresses Omar’s resolution, and Lewis’ subsequent support, directly: “H. Res. 496 endorses the efforts of those who use the protection of the First Amendment to spread bigotry and hatred. This is the exact opposite of what the Honorable Congressman has fought for in his lifetime of activism.”
New Jersey voters who are looking to follow NORPAC’s leadership on this issue should be aware of two representatives who co-sponsored Omar’s pro-BDS resolution. Rep. Watson Coleman (D-NJ-12) and Rep. Payne (D-NJ-10) added their names within 24 hours of the resolution’s introduction. Unlike Lewis, neither of them co-sponsored the anti-BDS bill, although Payne voted for it. Between the two of them, they represent the Jewish communities of East Brunswick, Hillside, Linden, Monroe Township, South Orange and West Orange. Pro-Israel positions are not limited to the Jewish community, and anyone in New Jersey who cares about the continued existence of the Jewish state should be appalled by their co-sponsorship of this anti-Semitic resolution.
The anti-Semitic language in this resolution actually caused a modification to official State Department definitions of anti-Semitism. In August, the State Department added a new line to what they deem are “contemporary examples of anti-Semtism,” which takes a direct shot at the language in Omar’s resolution. “Drawing comparisons of contemporary Israeli policy to that of the Nazis” is now considered anti-Semitic.
Despite the clear majority of Congress expressing support for Israel when voting for anti-BDS legislation (as seen in S.1 and H. Res 246), there is still a contingent of those who are willing to express their anti-Semitism through the guise of anti-Israel policy. Many times representatives get too caught up in the “cause of the day” to properly consider the hatred and bigotry that these policies pursue. It is incumbent upon the organizations like NORPAC, governmental departments or the constituents of these representatives to ensure that those who support discriminatory policies are fully aware of the implications of their support. If the reasoning for their support is anti-Semitic, it is equally imcumbent on those groups to contact those representatives, call out the anti-Semitism, or ensure that they no longer have a seat in the House of Representatives.
By Moshe Hill
Moshe Hill has written for The Daily Wire, The Queens Jewish Link and The Jewish Link of New Jersey. Subscribe to aHillwithaview.com for more content from Moshe Hill. Like him on Facebook at facebook.com/ahillwithaview and follow on Twitter @TheMoHill.