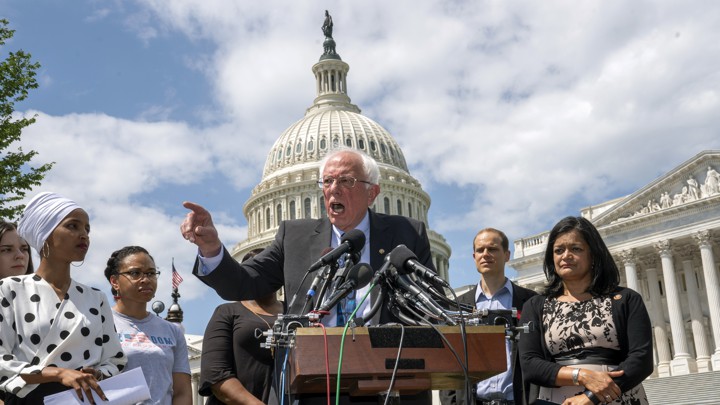 Yesterday, Presidential hopeful Bernie Sanders unveiled his plan to cancel student debt.  The #cancelstudentdebt was trending on twitter, with students all around the country asking for their bad decisions to be forgiven by the federal government.  Before their dream becomes a reality, they have to jump over a large hurdle, that nobody cares.

Sanders stood with fellow leftists Alexandria Ocasio-Cortez and Ilhan Omar.  Ocasio-Cortez told a story about a girl she mentored when she was 19 and the girl was 17, who got into her “dream college” but had to take out $250,000 in debt to go there.  This girl was from a middle class family, according to Ocasio-Cortez, and was distraught at the idea that she will have to incur that much debt to achieve her dream.

The point of this story is to elicit an emotional response from the audience, and to enrage viewers by confronting them with the reality of student loans.  It accomplishes neither of these goals.  Sympathy garnered for a middle class girl who can’t attend a dream university is few and far between.  Millions of people make hard choices, sacrifice dreams, pursue realistic and feasible options, because of the implications of decisions.  Why should any tax payer have to pay for the dreams of this girl?  If she was accepted to a prestigious university, she could certainly receive a scholarship to a second-tier university?  She can go to a heavily subsidized state school.  There are many options on the table.  Though, with a 19 year old Alexandria Ocasio-Cortez as her mentor, her ability to make intelligent decisions was already below average.

Sanders also released a video of testimonials from former students worried about their debt.  They complain about their terrible life choices, expecting the viewer to have sympathy for them.  One of them claimed that she was “too scared to look” and the amount of debt she has.  Nobody should care about their problems.  Nobody should care that they cannot buy a house or a car.  They made bad life choices.  They should not have gone to college unless they were pursuing a job that would pay for that degree.  A degree in political science or English literature is not an acceptable use of money.  America is in an economic boom, with full employment and rising wages.  There are no excuses.

Sanders attacked the Wall Street bailouts of 2008 when justifying his proposal.  The claim by him and his defenders is that if we can bail out Wall Street, we can bail out students.  There are multiple problems with this.  First, this is an argument to not provide bailouts to corporations or financial firms, not an argument to provide more bailouts.  Second, even if the United States could afford to spend the trillions of dollars it would take to bail out these debts, we still shouldn’t.  At the end of the day, everyone is responsible for their own decisions.  Skyrocketing costs of college between the Gen X and millennial generations is an indictment on the federal government securing student loans, not an excuse to throw more federal funds at the problem.  Our debt of $22 trillion is only growing larger, with no relief in site.  There will be nobody left to bail the United States out.

Lets call this move what it truly is, a cynical ploy to garner votes for the 2020 Presidential election and more elections in the future.  There are 45 million people out there with student loans, why not toss a vote to the guy who’ll relieve your debt?  Universities will love this, because they can keep selling useless degrees to idiots who’ll sign up for tens of thousands of dollar of loans, waiting for the next bailout.  However, this is not a bailout for students, its a bailout for universities.  Universities, which are already havens for leftist ideology, receiving a big check from a Democratically controlled government will further entrench them in Democratic policy.  They’ll continue to preach to the millions of students per year about the generosity of the socialists, and the evils of the capitalists.  Meanwhile, they are laughing all the way to the bank.  Their costs will keep rising, because they’ll keep getting paid by the government.  The university system will become like the healthcare system, where nobody knows how much things cost, only that it costs too much.

There are bound to be countless sob stories from people saddled with student debt.  Nobody should care about 99% of them.  The solution is in lowering tuition costs, not paying off the debts of poor decisions.  This should be a lesson to the next generation.  Don’t take on debt you can’t pay back, and don’t get a useless degree that cannot land a job in a great economy.  The world will be better off.