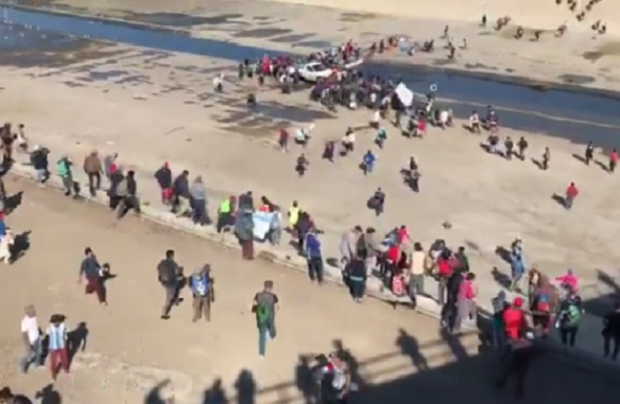 With the first Democratic debate last night, the 2020 Presidential election is officially underway.  The good thing about a Democratic primary is that candidates are trying to appeal to the most leftist base of their party for a short while to garner those votes.  Once a nominee is decided, the Democrat will moderate to appeal to middle America, forgetting all those promises made a few short months before.  So its important to note those radical statements as they come, so the candidates will be held accountable later.

So far, three presidential candidates, Elizabeth Warren, Julian Castro, and Cory Booker, have pledged to decriminalize illegal border crossings into the United States.  Currently, all illegal immigrants have violated Section 1325 of the  Immigration and Nationality Act, which says that crossing the U.S. border “at any time or place other than as designated by immigration officers” is a federal offense.

While Booker and Castro are long shots at the nomination, Warren has been gaining steady ground according to polling data.  Warren has the intersectionality of being a woman, so she has a leg up on old white men like Joe Biden and Bernie Sanders (who currently poll ahead of her).  Even if Warren, Castro or Booker aren’t the eventual nominees, even pitching decriminalizing illegal border crossings on a national Presidential stage will create a tectonic shift in our policy should any Democrat be elected president.

Castro, who is the most radical on the border, can easily leverage his base of support with the Democratic nominee, whoever that is.  He can drop out and endorse a front-runner in a tight primary battle in exchange for a position of power, like the head of Immigration and Customs Enforcement.  This should scare anyone, Republicans and Democrats, who care about border security.

Additionally, as the leftist base is becoming more and more radical, the leading Democrats are following whatever the loudest voices on Twitter are telling them.  The radical base loves the proposal of an open border, so this question will poll high amongst the much coveted millennial group.  It would not be out of character for someone like Joe Biden to grab onto this position with little to no pressure.  This is the same Joe Biden who reversed himself on federally funded abortions after decades of supporting the Hyde amendment, all because he was called out by Alyssa Milano.  This is the same Joe Biden who backtracked on referring to successor Mike Pence as a “decent guy” because Cynthia Nixon replied to a tweet.  Biden does not have convictions, so if the base says to decriminalize the border, he will.

This is a far cry from even Barack Obama’s border policy.  “We simply cannot allow people to pour into the United States undetected, undocumented, unchecked,” said Obama in 2005.  In 2013, Obama said during his State of the Union that he supported strong border security.  He was “putting more boots on the Southern border than at any time in our history and reducing illegal crossings to their lowest levels in 40 years.”

The Democrats have gone so far to the left that even Barack Obama is considered too moderate for their party now.  Given how early it is in the primary process, the American people should take note of these proposals now, because they will certainly lie about them in the future.