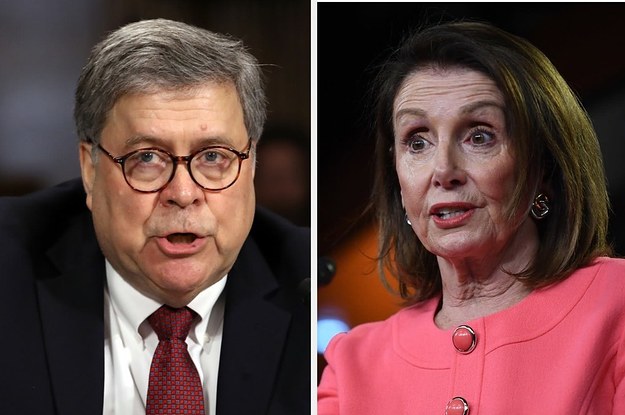 The reaction to the Mueller report from the Democrats does not mesh with the findings of said report.  In the broadest of terms, the report concluded that there was no collusion between the Trump campaign and the Russian effort to interfere in the 2016 election, and not enough evidence to prosecute for obstruction of justice.  If you listened to the Democrats and the Mainstream Media talk about these topics, you wouldn’t know that.

Prior to the report’s conclusion, the goalposts for the investigation dramatically shifted.  Originally it was investigating the extent of Russian interference in 2016 and the role, if any, the Trump campaign played in it.  Due to Trump’s complete lack of subtlety, accusations of his attempts to obstruct the investigation arose.  The majority of these attempts were very public in nature, usually via Twitter.  So when the report was released, there were few surprises.  Between the various leaks and the information releases over the past few years, the report was not much more than an archive of the things the public was already aware of.  When the public didn’t react the way they wanted, Democrats and the media changed tactics to artificially outrage them.

Objectively, this is a good thing.  It is good that the President of the United States didn’t collude with a foreign power to steal an election.  It is good that he didn’t obstruct justice.  The President not being a criminal is good for the country, one would think.  But admitting that positive outcome will not win back the Senate or the Oval Office, and the Democrats have nothing else to run on.  Every other line of attack against the Trump presidency will not yield electoral gains.

The April jobs report of 263,000 added jobs lowered the unemployment rate to 3.6%, the lowest since December 1969.  NASDAQ and the S&P 500 are back to the pre-downturn levels of September 2018, and hitting new records.  Wages are rising faster than in a decade.  The economy is doing great.  The Democrats cannot run against a good economy.  At best they can divide American’s by saying that some people are making more money than others, but the rebuttal of “a rising tide lifts all ships” is merely the entry point to that robust counter-argument.

The situation at the border is terrible, but Democrats can’t run on that either.  Their “solutions” are abolition of ICE, no barriers to illegal entry, protecting illegal aliens who commit crimes in their cities, and amnesty for everyone who made it over the border.  The words “comprehensive immigration reform” have no meaning, as politicians from both sides of the aisle have been spouting them for years with little to no details behind them.  The crisis is worsening, but the Democratic majority in Congress won’t pay to make alleviate it.  So even though Trump has yet to deliver on his promise of The Wall, Democrats have no viable solution to counter that proposal.

Climate change has been a consistent talking point for the left, but it’s not an electoral strategy.  According to Pew Research, environmental protection is American’s fifth spending priority, after education, veteran’s benefits, infrastructure and Medicare.  Americans are looking towards the private sector to lead the way on that front, not raise taxes and cram down new regulations.  The $93 Trillion, net zero benefit to climate change Green New Deal has become such a laughingstock that no Democratic Senator, including multiple presidential candidates, voted for it.  The United States is the leader in decreased carbon emissions, and the private sector is creating new, clean energy solutions.  It remains a question how much the government must lead the way, and what the best course of action is.  There is no consensus about that.

Healthcare costs are a problem, but that’s because Obamacare exacerbated the problem, which was the opposite of its goal.  The Democrats proposition of more government intervention is oxymoronic.  That’s why they are attempting to redefine healthcare as a human right, so the government must intervene (since the government is the protector of rights).  With the end to the individual mandate, the passing of the “Right To Try Act”, and the pursuit of lowering prescription drug prices, the Trump Administration has made some decent moves in the healthcare field, but there is much more to be done.  Medicare for All polls well in the absence of details, but support drops precipitously with every detail given.  When voters hear about the loss of private healthcare, the increased taxes and the delays in treatment and tests, the support is down to around 26%.

Race relations and the white supremacism problem could be damaging to Trump, but it won’t be.  With the “very fine people on both sides” misinformation campaign taking place front and center of the Biden campaign, the front-running democrat is banking on the same level of outrage for Trump in November 2020 as there was in August 2017.  However, in the years that followed, Trump’s strong rebuke and condemnation of every white supremacist attack worldwide could easily tip the scales back.  While the minority vote could hurt Trump, three things could prevent that.  First, Trump has higher minority approval ratings than past Republicans.  Second, depending on the democratic candidate, minority turnout may be lower, as seen with Obama voter turnout vs Hillary turnout.  Third, there’s the prevailing mood that the Obama era was a failure in race relations, which is why many voted for him in 2008.  So unless the challenger can draw out the minority vote, it won’t hurt Trump.

Foreign policy could be an area of attack on Trump, but the Democratic policy proposals aren’t better.  Trump’s relationship with Kim Jong Un is ridiculous, but there are no more threats or missile tests coming out of North Korea.  Iran bloviates as usual, but removal from the disastrous and unpopular Iran Deal leaves options on the table for sanctions or more.  ISIS has been reduced to ashes.  American relations with Israel have never been stronger.  Venezuelan intervention is something that both sides but the Bernie Sanders far-left agrees with, and that’s because Sanders economic proposals matches Dictator Maduro’s.  Despite, or maybe because of, Trump’s harsh rhetoric, NATO is stronger than ever.  The left’s complaint that “Europe doesn’t like us” does not resonate with Americans, who rightly doesn’t care what Europe thinks.  The European continent is a shadow of its former self, and never fully recovering from the Two World Wars, the Cold War, and the recent flood of immigrants that is draining its resources and drastically changing its culture.

Then there’s Russia, which in many ways has been curbed of the expansion dreams it had during the Obama administration.  The Democrats and the media are ignoring Trump’s closing of Russian consulates, issuance of sanctions, and rearming of Ukraine is reaction to Putin’s aggressive moves.  Instead they focus, as always, on Trump’s rhetoric over his actions.  Once again, Trump does not do himself any favors on that front, but the accusations fall far short of the reality.  Trump has been called a traitor, a Russian agent, and an illegitimate president.  As the evidence bore out, none of that is true.  However, since there is no need for the democrats to issue a group-wide mea culpa, as they have the media backing them up, so they can double down on their attacks.

This is the strongest argument they have, and it’s obvious they are milking it for all its worth.  Attorney General William Barr released more information in a faster manner than he had to, and the Democrats are still accusing him of a coverup.  Kamala Harris even turned against Robert Mueller when she essentially accused Barr of negligence for taking Mueller’s evidence at his word.  Democrats accuse Barr of lying, and the media don’t ask them when or how he lied.  They accuse Barr of being Trump’s “personal attorney” instead of the Attorney General of the United State, but cannot elaborate how Barr violated the law to protect Trump.  Calls for Barr’s resignation or, in lieu of that, impeachment, came before he even had a chance to testify.

The Mueller report was, in the end, a political mole hill, a document that makes President Trump look bad, certainly, but nothing too damaging.  This is because, unlike most politicians, Trump is very up front about who and what he is.  A blustering, brusk, blunt, brazen and sometimes bafoon-ish businessman who likes people who are nice to him and hates people who aren’t.  Republicans decided long ago that his counterpunching methodology was beneficial to push their priorities.  It’s paid off, with 100 federal conservative judges (including two in the Supreme Court), less regulation, lower taxes, improved economy, embassy move to Jerusalem, defeat of ISIS and more.  So when the report came out, and it turned out that it was a 450 page description of a character everyone already knew, it was dismissed as a waste of time and taxpayer money.

This is what is driving the Democrats up a wall, and this is why they are taking this mole hill and turning it into a mountain.  If the Mueller Report, of all things, can’t be the silver bullet that damages Trump, they truly have nothing.  They have wasted years, money and their majority in the House for zero return.  When their voters realize that, they’re electoral hopes are doomed.

Subscribe to ahillwithaview.com for new articles as they are posted