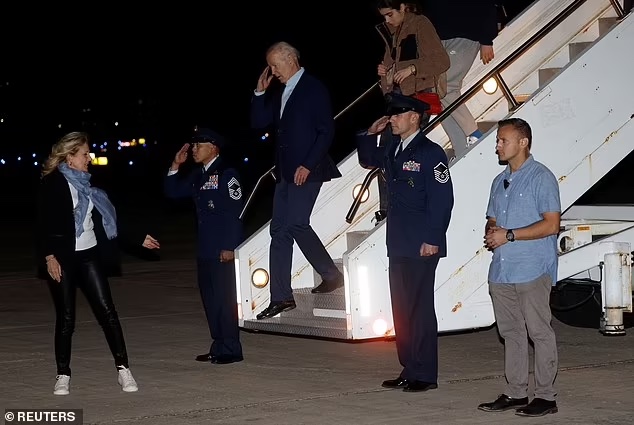 President Joe Biden landed in St. Croix for his vacation. When he departed Air Force One, streamers, confetti and balloons were released in commemoration of his 10,000th vacation in under 2 years of Presidency.

Joe Biden has spent 40% of his presidency on vacation, according to RNC Research, so it should be no surprise that he jet-set away for Christmas week. What did happen, however, is that he left when he should have actually been working. This week saw some of the most frigid temperatures and snowfalls in decades. West New York has seen 40 inches of snow, nearly 30 deaths, and mass lootings. The National Oceanic and Atmospheric Administration (NOAA) predicted this a week earlier than Biden’s departure, so there was plenty of time to change plans. Even normally warm areas of the country like Florida and Southern California hit freezing points.

Biden also left on his private, taxpayer funded jet when tens of thousands of fellow Americans were stranded. The Southwest Airlines cancelations grounded thousands of flights due to a combination of weather delays and their point-to-point flight system (that’s why it hit them harder than other airlines which use a hub system, The NY Times has a good breakdown of this.). While Joe Biden can’t get airplanes and pilots to their correct locations from the Oval Office, it’s a terrible look for the man to get on Air Force One and head to the Caribbean while passengers are sleeping on terminal floors.

Then there’s the actual job Joe Biden can do, which is sign bills. The 4,155 page $1.7 trillion omnibus bill has yet to be signed, and must be before December 30th. Biden couldn’t be bothered to sign it before he left, and they didn’t pack it to go with him, so now the bill needs to be flown out to him for him to sign. Otherwise, it doesn’t pass (which would be a good thing for the country.)

Then there’s New York City Mayor Eric Adams, who took off to the Virgin Islands for vacation. After ducking the media for several days, he admitted that he went to remember his mother who passed away 2 years ago. “After 365 days of commitment to this city, I decided to take two days to reflect on mommy. And to watch how you responded to my two days out of this city was really alarming,” the mayor told reporters after someone asked where he had been over the holiday weekend. “I deserve a good work-life balance like you do.” Adams added, “If I take time off to get my mental capacity together, so I can take the city through the crisis, I deserve those two days.”

Being the Mayor of a city is a hard job, and being the Mayor of the nations largest city is harder than most. The idea that the job can exist without severe scrutiny is laughable. Yet this is a local news story, and will not garner national attention. If the media was honest and consistent, they would hit Adams, regardless of his excuses and reasoning, for leaving the city during that time when it was known it advance that the weather situation would be untenable.

So it’s time to play everyone’s favorite game, “What would the media say if it was Trump?” Well, we all know what the media would say, which is that Trump is a traitor and a heretic and a tyrant for doing any one of these things. And it’s not limited to Trump. When Ted Cruz went ahead with his preplanned vacation to Cancun while Texas froze, he was the center of the media attention for weeks. It’s still brought up to this day. Ted Cruz is not in the executive branch, nor is he even in the Texas State legislature. He literally had no duties that could be performed to help with that disaster. Yet, it is optically bad to take vacation while your constituents suffer. But will the media give even a percentage of the feedback for Joe Biden as they did for Cruz? Clearly not.

This is a prime example n why the media has discredited themselves, and why many Americans reflexively reject any story they hear. Yet when they let Joe Biden and Eric Adams off the hook while they have a microscope pointed at every Tom, Dick and Harry with an R next to the name, they bring it on themselves when no one trusts them.