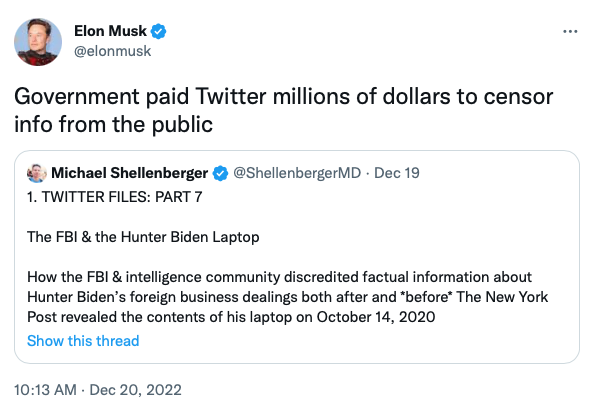 Twitter has released more internal documents from before Elon Musk took over the company. The revelations in this document dump have serious implications on the role of social media, government censorship, and public trust in the dissemination of information.

As a capper to all of the information being revealed, Musk himself has asked the Twitterverse if he should step down as the head of the company that he purchased for $44 billion last October. After over 17.5 million votes cast, the results were that he should step down, with a margin of 57.5%. No successor has been named.

Musk made this poll after a weekend of controversial choices in which he banned journalist accounts from sharing public information about the location of his private jet, which he claimed put his family at risk. He also banned Washington Post columnist Taylor Lorenz retroactively for doxxing private user’s personal information before he took over. All of these accounts were reinstated.

Matt Taibbi released this batch with the headline “Twitter, the FBI Subsidiary.” Claiming that the FBI and Twitter had a relationship that was “constant and pervasive,” Taibbi says that the FBI and former Twitter Trust and Safety Chief Yoel Roth (who is a frequent character in these files) shared over 150 emails between January 2020 and November 2022.

Taibbi reveals that the FBI’s social media task force, which was created in the wake of the 2016 election, increased in size and scope for the 2020 election. With a workforce of at least 80 people, they partnered with the Department of Homeland Security and security contractors to work to moderate content. A former intelligence insider scoffed at the notion that the government is competent enough to moderate this content on their own, implying that this was farmed out to other entities.

The files’ revelations were not limited to Twitter. An email, titled “Elections Work,” summarized then-legal-executive at Twitter Stacia Cardille’s elections-related work and opened by discussing “Government-Industry Sync.” This email was sent to Jim Baker, who was actually fired from Twitter after it was discovered that he was curating the Twitter Files.

“I participated in our monthly (soon to be weekly) 90-minute meeting with FBI, DOJ, DHS, ODNI, and industry peers on election threats.” This shows that Twitter was working with several Government entities, and they were not the only social media company involved.

So, what were they policing? It seems like they would stoop so low as to police obvious jokes with little to no audience. Another email from the FBI read, “Hello Twitter contacts,” “FBI San Francisco is notifying you of the below accounts which may potentially constitute violations of Twitter’s Terms of Service for any action or inaction deemed appropriate within Twitter policy.” Four Twitter account names followed, which were all suspended, including “one account whose tweets are almost all jokes,” but the latest of which Twitter considered “civic misinformation.”

The take-aways from this batch of Twitter files is that the FBI and Twitter had a very close relationship, and government resources were being used to target social media users. They would then call their buddies over at Twitter to block, ban, “shadowban,” or use some other mechanism to stop those users. This wasn’t over large accounts that were violating the law; these were tweets that were clearly under the protection of Freedom of Speech. While Twitter may be a private company that does not need to abide by free speech principles, the FBI is a government entity that could not or should not moderate speech. The question from these files is, was what the FBI did constitute turning Twitter into a “state actor,” which would trigger the Constitutional protection? If so, there is a major legal problem at hand. Even if not, Americans must determine if they want their government working hand in glove with Big Tech to censor speech.

Michael Shellenberger is back with the latest batch, and “In Twitter Files #7,” he writes, “We present evidence pointing to an organized effort by representatives of the intelligence community (IC), aimed at senior executives at news and social media companies, to discredit leaked information about Hunter Biden before and after it was published.”

From December 2019 through August 2020, the FBI had possession of the Hunter Biden laptop with only two parties knowing. First was the FBI, second was Mac Isaac, the Delaware computer store owner, who was in possession of Hunter’s laptop. Mac Isaac contacted Rudy Giuliani, who was the third party to be aware of the laptop’s existence, and Giuliani, in turn, gave it to the New York Post.

By the time that the Post published the story, “the FBI and other law enforcement agencies repeatedly primed Yoel Roth to dismiss reports of Hunter Biden’s laptop as a Russian ‘hack and leak’ operation,” writes Shellenberger. Shellenberger goes on to show that not only did the FBI know that this wasn’t Russian propaganda, “Twitter executives *repeatedly* reported very little Russian activity” on its platform. (“E.g., on Sept 24, 2020, Twitter told FBI it had removed 345 ‘largely inactive’ accounts ‘linked to previous coordinated Russian hacking attempts.’ They ‘had little reach & low follower accounts.’”)

On the night of October 13, 2020, the night before the Post published the Hunter Biden laptop story, “FBI Special Agent Elvis Chan sends ten documents to Twitter’s then-Head of Site Integrity, Yoel Roth, through Teleporter, a one-way communications channel from the FBI to Twitter.” The content of these documents is unknown. According to Margot Cleveland of The Federalist, “it seems likely the FBI used Teleporter to transmit classified materials to the select Twitter employees provided temporary security clearance. That possibility would also account for the cryptic way Baker and Roth describe the supposed experts’ view of the authenticity of the Hunter Biden laptop to other Twitter employees who likely lacked clearance.”

When the Post story came out on October 14, 2020, Baker, the now-former deputy general counsel of Twitter, had already “seen some reliable cybersecurity folks question the authenticity of the emails,” as he told Roth and 11 other colleagues in an email. “The formatting looks like they could be complete fabrications,” Baker explained. Another email also showed Baker had arranged a phone conversation with Matthew Perry in the FBI’s Office of General Counsel for that same day.

By 10 a.m., Roth wrote some 15-plus colleagues that they had decided to block the Post’s Hunter Biden story as hacked material, explaining that a “key factor informing our approach is consensus from experts monitoring election security and disinformation that this looks a lot like a hack-and-leak that learned from the 2016 Wikileaks approach and our policy changes.”

“The suggestion from experts – which rings true,” Roth continued, “is there was a hack that happened separately, and they loaded the hacked materials on the laptop that magically appeared at a repair shop in Delaware (and was coincidentally reviewed in a very invasive way by someone who coincidentally then handed the materials to Rudy Giuliani).”

As we now know, the Hunter Biden laptop was completely authentic. So, whatever the FBI told Twitter, or anything that Twitter told the public, was a lie that could have been the cause of Joe Biden winning the 2020 election.

Investigative journalist Lee Fang released the eighth part of the Twitter files, writing that “Twitter has claimed for years that they make concerted efforts to detect & thwart gov-backed platform manipulation…But behind the scenes, Twitter gave approval & special protection to the US military’s online psychological influence ops. Despite knowledge that Pentagon propaganda accounts used covert identities, Twitter did not suspend many for around two years or more. Some remain active.”

US Central Command (CENTCOM) gave a list of 52 Arab language accounts for Twitter to “amplify certain messages.” Several of these accounts were grants a special “whitelist” tag, which, “essentially provides verification status to the accounts w/o the blue check, meaning they are exempt from spam/abuse flags, more visible/likely to trend on hashtags.” CENTCOM would then use these accounts to promote US military priorities in the Middle East. These were fake accounts that claimed to be other people that Twitter not only did not ban, but they also helped amplify.

When this became public, Twitter, along with other social media companies that were also hosting fake accounts that were being controlled by CENTCOM, removed some of these accounts. Fang writes, “In subsequent reporting, Twitter was cast as an unbiased hero for removing ‘a network of fake user accounts promoting pro-Western policy positions.’ Media covering the story described Twitter as evenly applying its policies & proactive in suspending the DoD network.” However, “The reality is much more murky. Twitter actively assisted CENTCOM’s network going back to 2017 and as late as 2020 knew these accounts were covert/designed to deceive to manipulate the discourse, a violation of Twitter’s policies & promises. They waited years to suspend.”

CENTCOM isn’t the only government organization that has used Twitter this way, but it seems to be the only one that was actively aided by Twitter. According to Fang, “The conduct with the US military’s covert network stands in stark contrast with how Twitter has boasted about rapidly identifying and taking down covert accounts tied to state-backed influence operations, including Thailand, Russia, Venezuela, and others since 2016.”