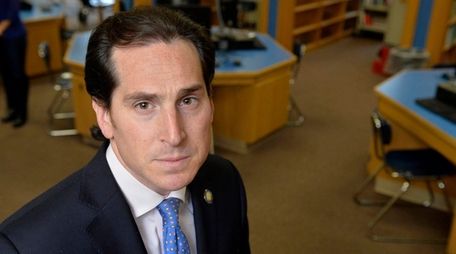 In an odd-numbered year made odder by the consistent and endless takeover of personal liberties, people don’t think they have the ability to make the necessary changes to government until 2022 or 2024.  To the contrary, the election of 2021 will affect the lives of Nassau County residents far more than either of those cycles.

Nassau County has two incredibly important leadership positions on the ballot this November: Nassau County Executive and Nassau County District Attorney.  The Executive position is currently held by Laura Curran, who presided over the disastrous property reassessment which caused 65% of homeowners in Nassau to have a spike in property taxes.  CBS quoted residents saying that the tax hike was “absurd” and “unfeasible.” When given the opportunity to cut taxes, Curran vetoed $9 million worth of tax cuts approved by the County legislature.

Her challenger, Councilmember Bruce Blakeman, is running “to get Nassau County back on track and put money back into our resident’s wallets.”  At a time of economic insecurity brought on by the decisions made in Albany and Washington, local leadership that is accountable to the constituents of the county is more necessary than ever.

Even more important than residents’ ability to pay for their homes and food on their tables is their need to rest easily at night in a safe neighborhood.  Voters have the opportunity to elect a new District Attorney after DA Madeline Singas was appointed to the New York Court of Appeals.  On the Republican side of the ballot, there’s Ann Donnelly, a 32-year veteran of the prosecutor’s office.  On the Democrat side of the ballot is Todd Kaminsky, the architect of the disastrous “No Cash Bail” law that caused a massive crime increase state-wide.

Kaminsky is running away from his record, though.  Despite being the leader of the “Long Island Six” – the group of Democrats from Long Island who were integral to the writing and passage of the No Cash Bail law – that information cannot be found on his campaign website or his campaign mailers. Instead, Kaminsky is hilariously (if misleading voters can be found funny) running on being a “tough, experienced prosecutor.”

In the bio of his campaign website, Kaminsky shamelessly ignores his role in releasing thousands of criminals back onto the streets to cause exponentially more crime.  “Continuing his focus on keeping Nassau’s communities safe,” the site reads, “Todd has passed laws to keep the public safe and ensure dangerous criminals are held accountable.”  The gall of such a campaign has one message to the voters: “You are stupid.”

Ann Donnelly knows who Kaminsky is and what pain he has wrought.  It was Kaminsky’s audacity that initially caused Donnelly to throw her hat into the race. Kaminsky’s campaign announcement took place on the steps of the courthouse that Anne Donnelly has spent over three decades working in.  When Donnelly saw the man who let criminals onto the streets by handcuffing judges stand on the steps of the very courthouse that she fights in, she knew that a man that dangerous cannot become the top cop in Nassau County.

To its credit, Nassau County is actually ranked the safest county in the country, according to U.S. News and World Report.  Voters should want to keep it that way.  With crime rising around the nation (murders increased 30% in 2020 according to the FBI), now is not the time for Nassau County residents to rest on their laurels or take their relative safety for granted.  We need a prosecutor who is tough on crime, not one who will decline prosecutions because of the needs of social justice leftists.

Voters must flock to the polls this October and November.  Those who cannot vote in person must send in an absentee ballot.  Young voters must register, and recent arrivals must change registration.  Just because we are not sending someone to the Oval Office doesn’t mean that this isn’t important. As a matter of fact, it’s life and death.