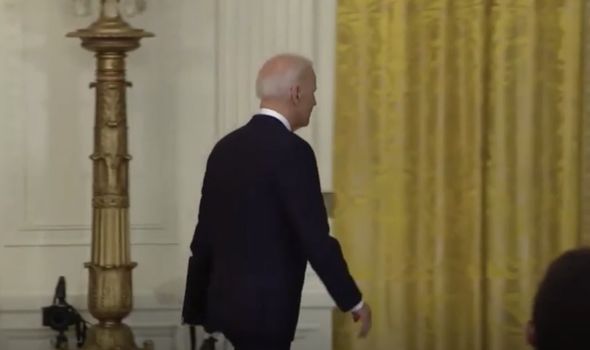 After the cataclysmic debacle of the fall of Afghanistan to the Taliban, Joe Biden took a break from his vacation to address the American people. In his speech, he blamed Trump and the Afghanis, but the blame is his. Then he refused to take questions from the media and went back on his vacation. America does not have a leader.

“When I came into office,” Biden said, “I inherited a deal that President Trump negotiated with the Taliban. Under his agreement, US forces would be out of Afghanistan by May 1, 2021, just a little over three months after I took office… The choice I had to make as your president was either to follow through on that agreement or be prepared to go back to fighting the Taliban in the middle of the spring fighting season.”

Putting aside the false dichotomy for a moment, Joe Biden has built his presidency on reversing every Trump policy, to predictably disastrous results. He canceled the Keystone XL pipeline, which put people out of work and reduced American energy independence. He stopped building the wall on the southern border, which created an unprecedented migrant crisis. He made overtures to Iran, who funded terrorism and created more Middle East conflict. So claiming that he did what he did because he was following Trump’s plan is a ridiculous excuse. If Biden governed like Trump, his presidency would have a modicum of success.

The most galling part, however, is that Trump’s plan was a plan. Plans should be implemented or changed based on the realities on the ground. The intelligence agencies said that this would happen, albeit on a slightly longer timetable. Instead of 30 to 90 days, Kabul fell in 30 to 90 hours. But a withdrawal should never have occurred in the manner in which it did. A foreign terrorist organization, which has been known to house other terrorist entities, now controls billions of dollars in American weaponry. That’s Joe Biden’s fault.

Then there is the false dichotomy that Biden claimed that it was either do this or Americans would die in droves. This is the same logic Obama gave when signing the Iran Deal, either this or war. This is a lie. The casualty rate in Afghanistan has been incredibly low for the past seven years, never exceeding two dozen annually, and many years in single digits. This was not a costly area of the world anymore, and it hasn’t been for nigh on a decade.

And there are legitimate reasons to stay in Afghanistan. Aside from the human rights violations that are occurring constantly under Taliban rule, where women can be killed for going to school and Afghanis who worked with America are tortured and hanged, an American presence is important for our national security, as well. In two decades, we forgot that it was the Taliban in Afghanistan who gave aid and security to al-Qaeda and Osama Bin Laden when he planned 9/11. A deterring presence in the region is incredibly important to prevent such attacks in the future.

Then there’s the fact that our geopolitical enemies, like China, Russia, and Iran, can fill the void that we left. They want to control the region, and its resources, and an unstable government is the perfect opportunity for them to do so. China is already making overtures to the Taliban, and they certainly don’t care about the human rights abuses.

Joe Biden did not have to do what he did in the manner in which he did it. That it is all immediately blowing up in his face is his responsibility. Trying to blame his predecessor and his former allies for his failures is the height of cowardice, and he is not competent enough to be our Commander in Chief.