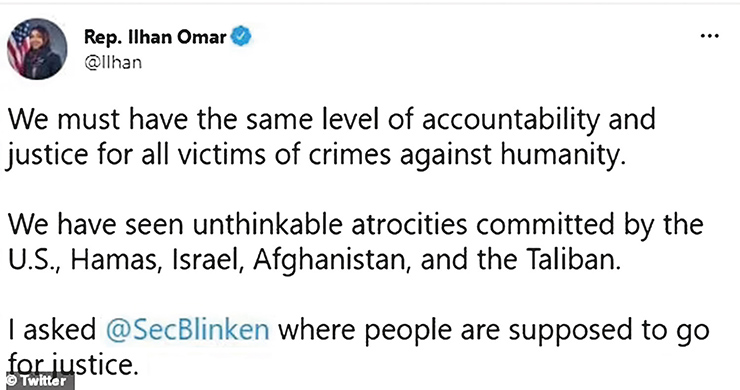 “We must have the same level of accountability and justice for all victims of crimes against humanity.  We have seen unthinkable atrocities committed by the U.S., Hamas, Israel, Afghanistan, and the Taliban.” This is what Ilhan Omar tweeted that caused the latest controversy.  This is what is being defended by the extreme left and ignored by Democratic leadership.

The Atlantic published an article by Elizabeth Bruenig entitled, “What Ilhan Omar Actually Said,” with the subtitle of, “No one should believe that Omar thinks the United States is identical to the Taliban.”  Bruenig went on to give more nuance and context than anyone at The Atlantic had bothered giving any Republican in the last decade for far less egregious comments than Omar’s.

A group of 12 Jewish Democratic Members of Congress signed a letter asking Omar to “clarify her words placing the US and Israel in the same category as Hamas and the Taliban.” That is the closest that any Democrat came to “rebuking” Ilhan Omar.  For context, when Marjorie Taylor Greene compared carrying a vaccine passport to Jews wearing yellow stars, Kevin McCarthy tweeted, “Marjorie is wrong, and her intentional decision to compare the horrors of the Holocaust with wearing masks is appalling. Let me be clear: the House Republican Conference condemns this language.”  And if tough rhetoric doesn’t work, consider that Greene has spent the last week visiting the Holocaust museum to learn more about it.

So what was the reaction from Omar and her Squad-mates for this milquetoast “rebuke”?  Ilhan Omar said, “The islamophobic tropes in this statement are offensive. The constant harassment & silencing from the signers of this letter is unbearable.”  Cori Bush tweeted, “Stop attacking @IlhanMN. Stop attacking us. I’m not surprised when Republicans attack Black women for standing up for human rights. But when it’s Democrats, it’s especially hurtful. We’re your colleagues. Talk to us directly. Enough with the anti-Blackness and Islamophobia.”  Not to be outdone, Alexandria Ocasio-Cortez tweeted, “Pretty sick & tired of the constant vilification, intentional mischaracterization, and public targeting of @IlhanMN coming from our caucus.”  And of course, Rashida Tlaib told her 1.4 million followers that “Freedom of speech doesn’t exist for Muslim women in Congress. The benefit of the doubt doesn’t exist for Muslim women in Congress. House Democratic leadership should be ashamed of its relentless, exclusive tone policing of Congresswomen of color.”

Nancy Pelosi is caving to the Squad, again, and giving Omar a pass.  When asked about it on CNN’s “State of the Union,” Pelosi said that “We did not rebuke her” and “Congresswoman Omar is a valued member of our caucus.”

Why wouldn’t Omar think America is as bad as the Taliban?  As Bruenig herself admits on twitter, “Did we not just live through five years of Dems saying the USA was a dictatorship, an autocracy, a quasi-fascist failed democracy with ambitions of being an ethnostate?”  This is entirely correct, and this view of America is not limited to our elected officials.

Editorial board member of the New York Times, Mara Gay, found herself in hot water by the Right this week when she said that she found American flags “disturbing.” “I was on Long Island this weekend visiting a really dear friend, and I was really disturbed,” Gay said. “I saw, you know, dozens and dozens of pickup trucks with explicatives [sic] against Joe Biden on the back of them, Trump flags, and in some cases just dozens of American flags, which is also just disturbing … Essentially the message was clear. ‘This is my country. This is not your country. I own this.’”

Did the Times rebuke Gay, or force her to make an apology?  Absolutely not.  They defended her.  “New York Times editorial board member Mara Gay’s comments on MSNBC have been irresponsibly taken out of context,” tweeted the Times’ PR account.  “Her argument was that Trump and many of his supporters have politicized the American flag. The attacks on her today are ill-informed and grounded in bad-faith.”  Who politicized the American flag: The Party that holds it high and stands for respect, or the Party who kneels when it is raised? The American flag is a symbol for the entire country, yet that symbol is the only part of the culture war that the Left has ceded to the Right.

So who is worthy of rebuke from the Democratic Party?  The only two Senators who aren’t falling in line: Joe Manchin and Kyrsten Sinema. Manchin and Sinema, who are Democrats in Deep Red and Lean Red states respectively, have committed the grave sin of saying they will not overturn the legislative filibuster, which would give Democrats free reign to push any policy they want.  It would also destroy the Legislative Branch as we know it.

Of course, radical Left representatives all the way up to President Biden himself have far harsher words to say about Manchin and Sinema than they do about Ilhan Omar.  But that’s how it works in the Democratic Party of 2021.  The moderates in Red and Purple districts are to be thrown under the bus, while the radicals in deep Blue districts are the “valued member[s] of our caucus.”  Republicans should hope they keep this up, because pushing away the center is bound to lead to a Red Wave in 2022.  Then Omar will learn that denigrating America has consequences.