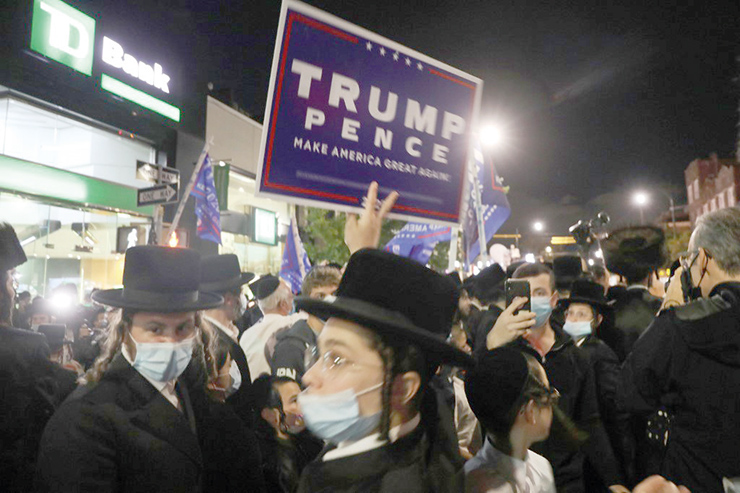 By the time this article is published, the Presidency of Donald J. Trump will be over. For many on the conservative Right, whether they agreed or disagreed with Trump on a variety of issues, this is the end of federal conservative policies for at least two years, likely longer. Many articles were written last week that the American Orthodox Jewish community needs to reckon with its support for the President. This is not necessary, as Trump’s successes need not be forgiven, and his failures need not be apologized for by his voters.

The Capitol Insurrection on Wednesday, January 6, which has been disavowed ad nauseam by Republicans, was the impetus for the myriad of articles demanding repentance from the Orthodox community writ large, a community that has outsized support for President Trump. Whether or not these authors were in favor of the President prior to January 6, and they were not, is mostly irrelevant. They used their platform to villainize and demonize their fellow Jews. This alone is a major issue. The Jewish community has enough issues without allowing political differences to pit us against each other. In 2021, this is largely unavoidable, but those who participate in such action should tread very carefully. Criticizing a public persona is one thing; but if their intention is to get their fellows to see the error of their ways, mass public shaming in an era where any criticism of political viewpoint only leads to stubborn defensiveness is certainly unwise, if not foolish.

The YU Observer published a piece by RIETS Rosh Yeshiva Rabbi Ezra Schwartz. (Author’s note: Rabbi Schwartz was the Rabbi of the Mount Sinai Jewish Center in Washington Heights for the seven years that I lived there, and a rabbi whom I greatly respect.) Rabbi Schwartz’s low opinion of Trump was never a secret; he hosted an open forum in 2016 for people who were upset about the election results. His article extends that opinion to the attendees of the January 6 rally, or anyone who did anything but condemn it completely.

“There is a need to address the Orthodox Jews who participated in the rally,” wrote Rabbi Schwartz, “those who celebrated the event even silently, those who sympathized with its goals if not with its implementation, and even those who in their Monday morning quarterbacking fell short of voicing uncompromised condemnation of the entire event. In short, what happened on Wednesday should force our community to recalibrate our moral compass and take careful stock of whether we are being true to hashkafas haTorah (the outlook of the Torah). I believe that the event needs to be reacted to with the strongest possible condemnation.” Rabbi Schwartz was not discussing the insurrection into the Capitol; he was saying that anyone who fell short of completely rebuking the rally itself needs to recalibrate his or her moral compass.

His reasoning is specious at best. He claims that he is “sickened by the image of my brothers and sisters, people wearing yarmulke and tzitzis, skirts and snoods,” who were standing “arm in arm with those wearing sweatshirts that state ‘6 Million Were not Enough.’” There were literally tens of thousands of people at the event. If Rabbi Schwartz sat on the first base line at a Yankee game, and a neo-Nazi was sitting in the bleachers, would he be “arm in arm” with that person? Even if there was one religious Jew who marched “arm in arm” with a neo-Nazi, does that condemn every Orthodox Jew who voted for Trump? This is ridiculous. There is a massive difference between those who attended the rally and those who stormed the Capitol, and an even greater difference from those who fell short of unequivocally condemning every aspect of the rally and actual neo-Nazis. To paint with such a broad brush is irresponsible.

This activism extends beyond publication. Rabbi Yosef Adler, Rosh Yeshiva of the Torah Academy of Bergen County (TABC) and the mara d’asra of Congregation Rinat Yisrael in Teaneck chose to change the prayer for the American government said on Shabbos. Rabbi Adler, in a statement this week, admits that past rabbanim have prayed for the welfare of governments that displayed open hostility towards Jews, like Roman and Russian governments. Nonetheless, he chose to “instruct all gabbaim to replace the President in this t’filah” and instead pray to “uplift the Vice President.” He did add that after the inauguration, they can return to praying for the President.

Rabbi Adler chose to make a massive political statement on the last Shabbos of the Trump presidency. What will that accomplish? Will Trump voters feel closer to t’filah, or further away? Is this change enough vengeance to quench the thirst of the Trump haters, or will this merely make them desperate for more modifications? How about a prayer to evict Josh Hawley and Ted Cruz, who challenged the Electoral College results? Why pray for Mike Pence, as he was a loyal Vice President to Trump for the duration of his term? Many who long to see Trump kicked out from office for the past four years would have balked at the idea of a President Pence as well, so why pray for his welfare?

Perhaps Rabbi Adler could learn a lesson from Rabbi Jonathan Muskat of the Young Israel of Oceanside. In December 2016, after Obama chose to not veto an anti-Israel resolution in the UN, Rabbi Muskat wrote, “I don’t see how I can recite a prayer that explicitly blesses President Obama anymore in shul. At the same time, I am aware of the danger of not reciting a prayer for the government when you don’t like the government’s policies. Where do you draw the line? Honest and vigorous political debate is good, but not when it is time to pray.” He therefore modified the prayer to bless “not the leaders of our government, but bless the United States and its citizens and ask God to place in the hearts of our leaders compassion to do good with us and with all of Israel.” That is far more unifying than just pretending that Trump doesn’t exist.

The disgusting actions of criminals on January 6 has Trump haters in the Orthodox community crawling out of the woodwork, eager to pounce on their hatred and blame their fellow Jews in the process. Steve Lipman, in last week’s Queens Jewish Link, completely dismissed Trump’s incredible pro-Israel record because Trump is a “sociopath.” Two shuls in the Five Towns said that they would stop carrying the Five Towns Jewish Times after they published a front-page picture of a columnist at the rally, even though they specifically mentioned that she left before the violence broke out. Another columnist resigned from the paper, even though the editor apologized.

How many people said the same about Democrats when they burned cities this past summer? How many decried calls for violence when celebrities like Madonna claimed she wanted to “blow up the White House” or when Johnny Depp questioned when was the last time an actor killed a president? How many said not to vote Democrat because Nancy Pelosi wondered why there weren’t uprisings all over the country because of Trump’s immigration policy? Did they blame her when an ICE detention center in Washington State was firebombed? Did they blame Maxine Waters for the threats to the lives of multiple Republicans after she proclaimed, “If you see anybody from that Cabinet in a restaurant, in a department store, at a gasoline station, you get out and you create a crowd. And you push back on them. And you tell them they’re not welcome anymore, anywhere.” Did they blame Bernie Sanders when one of his supporters shot Republican Steve Scalise, shouting “This is for healthcare” after Sanders said that the GOP Healthcare bill would kill millions of people?

What is the standard? Should supporters of a politician be held accountable for not only everything that person says, but everything every other supporter of that person does? That is not just dangerous territory, it’s impossible. Orthodox Jews don’t need to reckon after Trump. They supported him, and they’ll either support or not support the next candidate. Unification doesn’t occur when you demand repentance from your fellow; it occurs when you embrace those around you, even when you disagree with them.