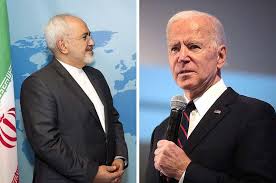 “I can assure you that the president…is not looking to the last presidency as the model for his foreign policy moving forward.” Jen Psaki, White House Press Secretary, said this in response to a tariff question, but it is indicative of the Biden administrations defining policy principle: Anything Trump did, reverse it.

This includes charging right back into the atrocious Iran Deal (more formally known as the Joint Comprehensive Plan. of Action, or the JCPOA), which guaranteed Iran a path to a nuclear weapon by 2025 and unlimited leeway to fund terrorism without sanction.  One of the best moves of the Trump administration was pulling out of that deal, and curbing Iran’s continued aggression in the region.

As a refresher, Trump’s victories in Iran are not limited to pulling out of the Iran Deal.  2020 alone saw a great reduction in Iran’s capabilities, with the deaths of the Ayatollah’s number two (Qasem Soleimani) and top nuclear scientist (Mohsen Fakhrizadeh). Trump put together a coalition against Iran in the Middle East when he orchestrated the Abraham Peace Accords.  Trump’s sanctions have cost Iran a trillion dollars – which is a trillion less dollars going towards ballistic missiles and funding terrorists, both of which were allowed under the Iran Deal.

“The United States would accept an invitation from the European Union High Representative to attend a meeting of the P5+1 and Iran to discuss a diplomatic way forward on Iran’s nuclear program,” said Ned Price, U.S. State Department spokesman.  What’s never mentioned is that while the United States pulled out of the deal, other nations remained in it, meaning that Iran would still have to comply with the terms of the deal.  However, they have not been compliant, and Iran’s Foreign Minister has admitted so.

In December, Javad Zarif said, “The US must implement without preconditions its obligations under the JCPOA. It has to show its good faith, it has to establish its bona fides, then Iran will go back in full compliance with JCPOA.”  Iran will not comply with the deal unless there are “assurances” that the United States will not leave it again. This puts the Biden administration on the defensive, as it wants to get into the deal more than it wants to exude strength.

This lack of strength is all the more evident after the Biden administration did not retaliate after Iranian-backed forces attacked a U.S. base.  According to U.S. News and World Report, “The U.S. and its Kurdish allies in Iraq believe Iran was complicit in a deadly rocket attack Monday against an airport housing American forces near the Iraqi Kurdish capital of Irbil that killed at least one contractor from the U.S.-led coalition and injured a U.S. service member among many others.”  When asked, Jen Psaki claimed that the White House has not “determined attribution at this point,” meaning they will not blame Iran.  Three days later, Ned Price put out his statement about re-entering the deal.  (Needless to say, if the same events occurred under Trump, the narrative would be that he was disregarding his intelligence agencies and betraying Kurdish allies.)

Zarif smells blood in the water, and is ready to attack.  On Iran’s state-run PressTV, he said that at the negotiating table, Iran will not only demand immediate removal of 1600 sanctions, but also the $1 trillion loss that occurred because of those sanctions.  “Whether those compensations will take the form of reparation, or whether they take the form of investment, or whether they take the form of measures to prevent a repeat of what Trump did,” he said.  Zarif clearly knows that the best way to get what he wants from the Biden administration is to bash Trump.

The reaction to the news about Biden re-entering the Iran Deal was quick and predictable.  Those who were against it before are against it now, and vice versa.  Republican Jewish Coalition (RJC) Executive Director Matt Brooks said in a statement, “And so, it begins: The Biden administration said today that it is ready to meet with Iran and other signatories to the dangerously flawed 2015 Iran nuclear deal. The US also eased travel restriction on Iranian diplomats at the UN. We’re already making concessions to Iran even before Iran comes into full compliance with the JCPOA. The Biden administration is reverting right back to the counter-productive policies of the Obama-Biden years.”

Former UN Ambassador Nikki Haley tweeted, “Returning to the deeply flawed Iran deal would be a huge mistake. The regime continues to threaten us, spread terrorism, and cause chaos in the region. The Biden Administration is playing into the Ayatollah’s hands.”  Former Secretary of State Mike Pompeo said on Newsmax, “If we’re prepared to take a deal at any cost, we’ll get a really crappy deal again.  Frankly, American security can’t afford that.  Stability in the Middle East will be destroyed.”

On the other side of the aisle, Connecticut Senator Chris Murphy tweeted, “The Iran nuclear deal’s original terms made the world a safer place. That’s why restarting the agreement through “compliance for compliance,” rather than trying to hold out for a new/different deal (as Trump, Iran hawks wanted) is the best path.”

The Iran Deal was a disaster.  Democrats and their media counterparts only focused on the nuclear part of the deal, completely ignoring all the other issues.  Iran could fund terror, build up its non-nuclear arsenal, and continue its egregious human rights violations and still be compliant with the deal.  Nuclear weapons are, of course, of paramount importance, but those other issues should have never been negotiated away. Additionally, by the next U.S. administration, the terms of the deal will have expired, and Iran will be back on its way to nuclear capabilities.

The best aspect of the Trump administration was its foreign policy.  The worst part of Biden’s resume is his foreign policy.  Instead of swallowing his pride and admitting that Trump did a few things right, Biden is taking the United States, and the world, down a road that ends with a re-emboldened Iran – one that will have even more cash to fund whatever it wants.