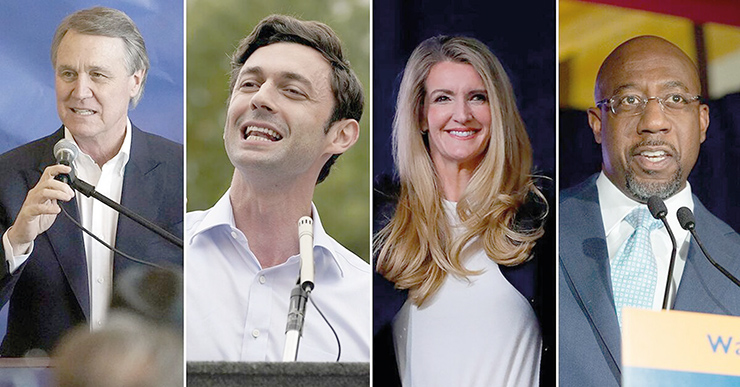 As the end of the year approaches and the future of Washington politics is taking shape, the Senate race in Georgia is taking on far greater importance than a normal runoff election would.  Should the Democrats win, there will be a 50-50 split in the Senate (with Vice President Harris as the tie-breaker), a Democrat House majority, and a Democrat President.  There will be little to nothing to stop the socialist leftwing of the Democratic Party from enacting their policies.

The policies on the table include Medicare for All, the Green New Deal, and an open border.  Each of these alone will force the government to borrow more and more money, something that the United States cannot do in perpetuity.  However, what’s at stake is greater than spending money that the government doesn’t have. The Democrats have shown willingness to fundamentally change the system so they are never out of power again.  They can end the legislative filibuster, like they ended the judicial filibuster in 2013.  This means that they will only need 51 votes to push through their policies instead of 60.  They can add Puerto Rico and Washington DC as states, ensuring that they have four more Senators in perpetuity.  They can pack the Supreme Court, and the activist judges they seat will rewrite the Constitution as they see fit.

Even Democratic voters should balk at these proposals.  At this point, a majority of State Legislatures are Republican controlled.  These states will not sit idly by while the federal government is irreparably damaged.  Secession talk has already begun on right-wing talk radio, and while that’s a far-cry from reality, it’s a dangerous path to go down if remaining a single country matters anymore.

For those who hope that the Democrats, should they be in control of the House, Senate and White House, will either be a moderate party or an ineffective one, the political landscape may say otherwise.  Should the Democrats win in Georgia, Chuck Schumer will be Majority Leader; he will be in charge of what bills are brought to the floor of the Senate.  Schumer, who is up for re-election in 2022, is already worrying about a primary from his left, especially from Alexandria Ocasio-Cortez.  So he’ll work to boost his leftwing resume so he can avoid that eventuality.

Even within the Senate, it’s not like the candidates in Georgia are moderate Democrats; they are incredibly radical left-wing socialist Democrats.  Republicans incumbents David Perdue and Kelly Loeffler are taking on Jon Ossoff and Raphael Warnock, respectively.  Both Warnock and Ossoff are in the political mold of Bernie Sanders.

Reverend Raphael Warnock, who openly praised Marxism in his 2013 book, has videos of his own radicalism being unearthed daily. Also in 2013, he praised notorious anti-Semite Louis Farrakhan, saying that Farrakhan was an “important voice.” Warnock invited another anti-Semite, Jeremiah Wright, to speak at his church in 2014.  In 2015, Warnock referred to Israel as an “apartheid” state and that it’s “a land of violence and bloodshed and occupation.”  In 2016, he compared Netanyahu to segregationist George Wallace.  Warnock has some of the most notorious anti-Semites of the day campaigning for him, like Linda Sarsour, Rashida Tlaib, and Ilhan Omar.

Warnock’s radicalism isn’t limited to the Jewish people and Israel; he has a particular animosity towards America as well. He claimed that “nobody can serve G-d and the military,” essentially claiming that the millions who have served in our Armed Forces are G-dless.  He called Republicans “gangsters” and “thugs” who “launched a vicious and evil attack on the most vulnerable people in America.”  What did Republicans do to earn such vitriolic attacks?  They passed a tax cut in late 2017.  Warnock’s views on abortion are so radical that two dozen black pastors wrote a letter decrying those views after he referred to himself as “a pro-choice pastor.”

The other Democrat is Jon Ossoff, who made national headlines when he ran a losing Congressional campaign in a 2017 special election.  He was a darling character of the Hollywood left, a group that accepted his wealthy background and espoused socialist views.

Ossoff has a major scandal brewing, as his media company has taken money from organizations linked to the Chinese Communist Party (CCP).  He’s also taken money from Al Jazeera and J-Street.  From a policy perspective, Ossoff is as leftwing as many members of the Democratic Caucus, which means that he will be on board with as many radical policies as they can ram through before the next election.

Given the danger of losing these seats, Republicans are walking a tightrope in Georgia.  On the one side, a majority of Georgians believe that the election in November was not conducted fairly.  On the other side, Republicans from around the country are encouraging Georgians to turn out and vote.

This is why it’s incredibly important for Republican leadership, from President Trump down to the local member of the Assembly, to loudly and repeatedly encourage all Georgians to vote.  The goal should be to overwhelm the system, not let it win.  Even from New York, those who care about the future of the country should be encouraging anyone they know in the area to vote, or should contribute to the Perdue and Loeffler campaigns.

The eyes of the country are on these Georgia races, and the fate of the country will be determined based on their outcome.  Republicans must show up in droves to ensure that the nation will have a fighting chance going forward.