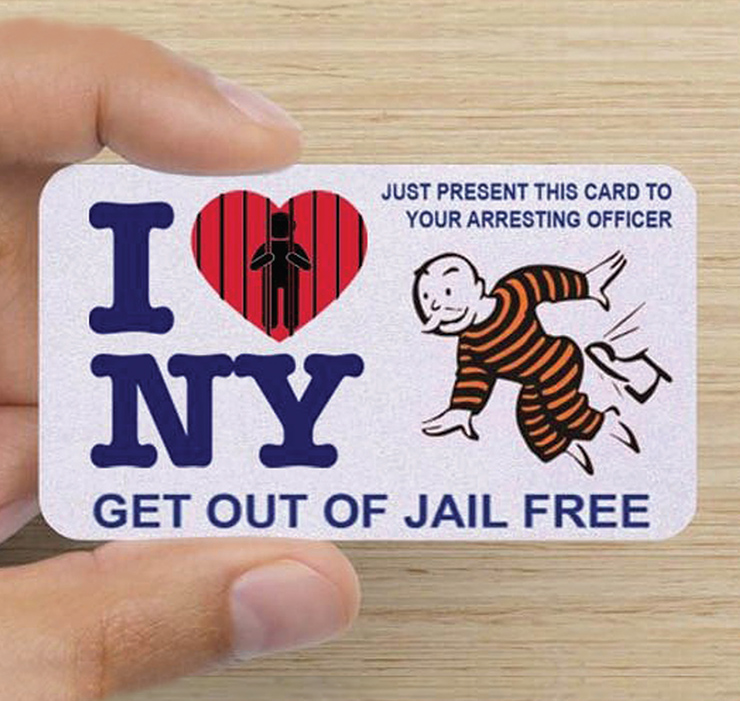 Since the beginning of the New Year, the new Bail Reform laws, passed by the New York State Assembly and Senate last March and signed by Governor Cuomo last April, have been an unmitigated disaster. The law officially went into effect on January 1, and there have already been murmurings in Albany about reforming the new Bail Reform or repealing it altogether. The good news, though, is that the destructive power of a Democrat-only government is on full display for the whole country to see.
The Democrats regained control of the State Senate in 2019 (for the first time since 2011), and have been having a field day ever since. Abortion laws, driver licenses for illegal aliens, and plastic bag bans are the tip of the iceberg. Where they really had fun was restructuring the bail system.
For years, conventional Democratic wisdom has said that the criminal justice laws pushed in the 1990s – due to massive crime waves – was a mistake. This is because the jails were being filled with young, African American men. It was inconsequential that young, African American men committed a disproportionate amount of crime to their population; all that mattered was that a certain demographic was over-represented, so the law itself must be racist.
Bail Reform became a top priority for the newly minted Democratic Majority in the Assembly, Senate, and Governorship. Introduced in January 2019, signed in April, the votes were essentially held to party lines. Only 14 Democrats in the Assembly split from their colleagues to vote Nay; otherwise it was Democrats for, Republicans against. As with Obamacare, the Republican crystal ball strikes again, because within a few weeks of implementation of the law, criminals have run amok.

Tiffany Harris, a woman who was arrested for punching three Jewish women, was released the next day. She was then arrested and released again – twice
The first to gain notoriety because of the changes was Tiffany Harris, a woman who was arrested on a Friday for punching three Jewish women, released the next day, was arrested again on Sunday for punching someone else, and was released the next day. When she didn’t show up for a court-ordered appointment, she was arrested a third time.
In Albany, a man was released after being accused of second-degree murder. Another man, the “Serial Slugger,” was arrested and released multiple times for punching women at random. A robbery suspect was released, and immediately went and robbed another bank.
Law enforcement is livid over the situation. Former NYPD Commissioner Bill Bratton made his feelings clear on a radio interview. “They did not ask a single judge, a single district attorney, a single police chief in the state to comment on this most significant criminal justice reform in the history of New York,” he said to host John Catsimatidis. “And now we are left to pick up the debris that it’s going to create.”
Bratton, a Democrat who served under Mayors Bill de Blasio and Rudy Giuliani, continued: “There’s no denying [bail] needs to be reformed, but the way they did it here in New York, unlike 47 of the 50 states that allow a judge to take into consideration…public safety – this isn’t reform. This is a total capitulation to the criminal defense lawyers, the Legal Aid Society, and some of our progressive legislators.”
Some of those progressive legislators are having buyer’s remorse about the law they rushed through, but they are too beholden to the Democrat Socialist left in New York to do anything about it. Governor Andrew Cuomo has said that he would consider adding hate crimes to the list of offenses that require bail. However, Cuomo failed to mention bail reform during his State of the State address on Thursday, January 8, despite it being the single most discussed issue in Albany.
Speaker of the Assembly Carl Heastie has no issues with the law or its repercussions. “I think I’m ready to let the law continue the way it is,” the 19-year veteran of the Assembly said to reporters. “We want safe communities, but it is important to have a criminal justice system that treats everybody equally.”
Heastie dismisses the notion that criminals who are literally given a “get out of jail free” card will commit more crimes. “I didn’t hear anybody screaming, and yelling or panicking, when Harvey Weinstein was able to put in a million dollars on bail, walk out of jail with all of the horrible things he did to people,” he added. “So, we have to get out of this idea that bail equates to safety.” Heastie, who represents the Bronx, has not received less than 96% of the vote in his district in over a decade.
In fact, many Democrats in the State Assembly receive little to no opposition. Forty-one Democrats ran unopposed in 2018, while another 28 received over 70% of the vote in their districts. The Assembly has had a Democrat supermajority for decades. The State Senate is usually the only check on Democrat power in Albany, but since the loss in 2018, the lunatics have been running the asylum.
So, in a way, the disaster of Bail Reform is a good thing. The people of New York may become so downtrodden, their lives so disrupted and awful, that they actually vote for party change in the legislature or the Governor’s office. Either that, or New Yorkers with means will flee the state, as millions have in the past decade, and those without means will continue to vote Democrat and suffer. Albany has decided to make New York the model for an awful bail system, and they only had to sell out their law-abiding constituents to do it.
Moshe Hill is a political analyst who has written for The Daily Wire, the Queens Jewish Link, The Jewish Link of New Jersey and JNS.org. He is regularly featured on ‘The Josh M Show’ podcast. Subscribe to aHillwithaview.com for more content from Moshe Hill. Like him on Facebook at facebook.com/ahillwithaview and follow him on Twitter @TheMoHill.