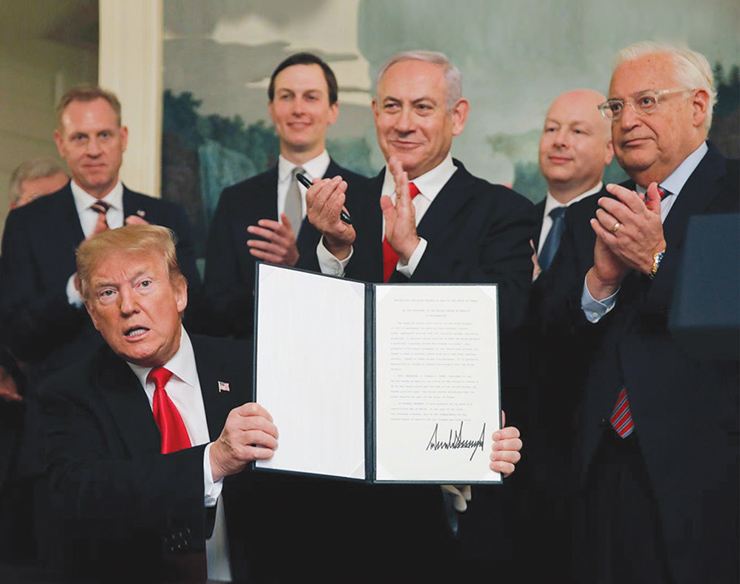 Last week, President Trump delivered his annual State of the Union (SOTU) address. As in previous years, acute onset Trump Derangement Syndrome fell upon members of the Democratic Caucus, who remained firmly in their seats throughout most of the speech. New York voters who witnessed the galling behavior of their Representatives have the opportunity to have their voices of disgust heard at the ballot box this November, when all Members of the House are up for re-election.
Much of the reaction to President Trump’s third State of the Union address was the same as his second. “However, there are some things that every American should cheer, but Democrats won’t,” last year’s SOTU article in the Queens Jewish Link said. “Record black unemployment? No cheers. Record Hispanic unemployment? No applause. Record Americans with disabilities unemployment? No claps. The Republicans in the room probably needed to make a group chiropractor appointment with all the standing ovations over these pronouncements.” This year, the Democrats went even further. Some moments, like Trump’s pronouncement that seven million people have been pulled off Food Stamps during his tenure, received audible boos from the Democrats. No one, however, could top Speaker of the House Nancy Pelosi.
After extending an unshaken hand to Trump (which video evidence shows that Trump didn’t see, and he didn’t shake Vice President Mike Pence’s hand either), Pelosi opened the event by refusing to say the traditional honorific introduction to Trump, ending up merely saying, “Ladies and gentlemen, the President of the United States.” She then proceeded to spend her considerable amount of screen time (she is seen every time Trump is) rifling through her copy of the speech as if she were on the E Train and a homeless man was begging for money, doing her best to ignore him. She was mumbling to herself, playing with her gums, and was generally rude and childish. Then came the coup de grâce. Trump finishes his speech, and as everyone rises to leave, she rips her copy of the speech in half.

This was no spur-of-the-moment action. The New York Post discovered through looking at different camera angles that Pelosi pre-ripped the speech in the beginning of the address, before she read it or heard it. She was testing how many pages she could rip at a time, which is why she knew later to rip it in sections. If the Democrats’ argument for campaigning against Trump was that they were the adults in the room, Pelosi literally shredded that argument.
Queens and the surrounding areas are all Democrat strongholds, but there is a growing movement of Republicans who are fed up with the antics and policies of their current Representatives. One of the largest districts in the area is the 3rd Congressional District, which covers parts of Queens, Nassau, and Suffolk counties. Its current Representative is Tom Suozzi, with George Santos running on the Republican ticket.
Santos was appalled at the behavior of the Democrats. “Speaker Pelosi and Thomas Suozzi sat in opposition for the majority of the President’s address,” he said in a statement. “Democrats are angry because America is winning under the leadership of President Trump. Suozzi cares more about politics than prosperity. That’s why Suozzi supports Impeachment, AOC’s “Green New Deal,” and single-payer healthcare. The NY-3 deserves better.”
Tom Zmich, who is running in the Republican Primary in District 6 against Grace Meng, focused on Trump’s record. “President Trump has led by example,” he said, “with the economy at an all-time high, our national security and military being supported at the highest level ever. His SOTU address highlighted his continuing desire to improve the Quality of Life for all Americans.”
Alexandria Ocasio-Cortez, who decided to skip the State of the Union address altogether, has a bevy of challengers in District 14. At present, there are eight declared Republican challengers to her seat, who will have to battle it out in June’s primary, and many of them took their reactions to social media. John Cummings tweeted, “As a high school civics teacher, what Nancy Pelosi did last night shocked me. Her disrespect for the office of the Presidency, driven by partisan hatred for President Trump, is a new low in American politics.” Scherie Murray continued in the same vein: “Nancy Pelosi huffed & puffed throughout entire #SOTU. Fidgeting! Her behavior behind #POTUS speech was childish & classless. She then rips up speech (which had names of our fallen). It wasn’t courteous! @speakerpelosi your behavior doesn’t rise to level of speaker of the House.”
Antoine Tucker had some words to say about the Democrats writ large. “I watched as most of the [black] Congressmen [and] Women Dems sat didn’t stand of clap [for] [President Trump] when he exposed that he’s done more for [black] America then any of the [people] that sat on their butts.”
The Democrats’ behavior transcended normal partisan politics. Like the impeachment that ended with the acquittal of President Trump, this was vindictive and fueled by hate. Instead of simply acknowledging some good things that have occurred, or commending the heroes and heroines whom Trump honored that night, they chose to use the State of the Union address as a platform to increase the divisiveness and polarization of the country. If Trump wins re-election, and they retain the House in 2020, next year will be a repeat of the same.
Moshe Hill is a political analyst who has written for The Daily Wire, the Queens Jewish Link, The Jewish Link of New Jersey and JNS.org. He is regularly featured on ‘The Josh M Show’ podcast. Subscribe to www.aHillwithaview.com for more content from Moshe Hill. Like him on Facebook at facebook.com/ahillwithaview and follow him on Twitter @TheMoHill.