In an op-ed for The New York Times, Presidential Candidate and New Jersey Senator Cory Booker lamented the Democratic Party’s dogmatic devotion to the public school system.  Touting his own record as mayor of Newark and his personal history of living in an area with good public schools, Booker diagnoses a legitimate problem in the education system.  However, if the goal is to provide equitable education choices for all students, his solution falls short.

“Parents in struggling communities across the country are going to extraordinary lengths to try to get their children into great public schools,” Booker writes.  “There is even a trend of children’s guardians using fake addresses to enroll them in better schools in nearby neighborhoods or towns — living in fear of hired investigators who follow children home to verify their addresses.”  The issue, in short, is a lack of choice.  Parents in urban, suburban, and rural areas around the country are locked into the public school district in which they live.  The local and state governments decide where your children go, and that could be around the corner from your residence, or miles away.

These same school districts receive funding from local, state and federal sources, which attribute to the quality of the education students who attend their schools receive.  Generally, wealthier neighborhoods with high property taxes have better public schools because they are receiving more funds from their local residents.  Poorer neighborhoods, where most of the residents are renting or perhaps are on public housing, and have high populations, do not have the same funds, and have crowded classrooms as well.

Booker attributes this educational resource divide to the “ZIP code a child lives in, skin color and the size of the family’s bank account.”  In 2019, only one of those three things are strictly true.  ZIP code is far more influential in the education your child receives than skin color and personal wealth.  While the truly expensive neighborhoods usually have the highest property taxes, there are a myriad of affordable suburban communities available to those who have graduated high school, have a job, and did not have children before they were married (a.k.a. The Brookings Institute’s three simple rules).

Each state calculates how they fund their schools.  New Jersey, Booker’s home state, funds on a per pupil basis and calculates funding based on the needs of the school.  If a school has a special needs student, or students where English is a second language, that student yields the district more funding.  50 states means there are at least 50 different ways of funding education systems.

More funding doesn’t mean more success in public schools.  Data pulled from U.S. News and World Report combined with education spending per student by state shows no correlation between amount of money spent per student and their educational results. 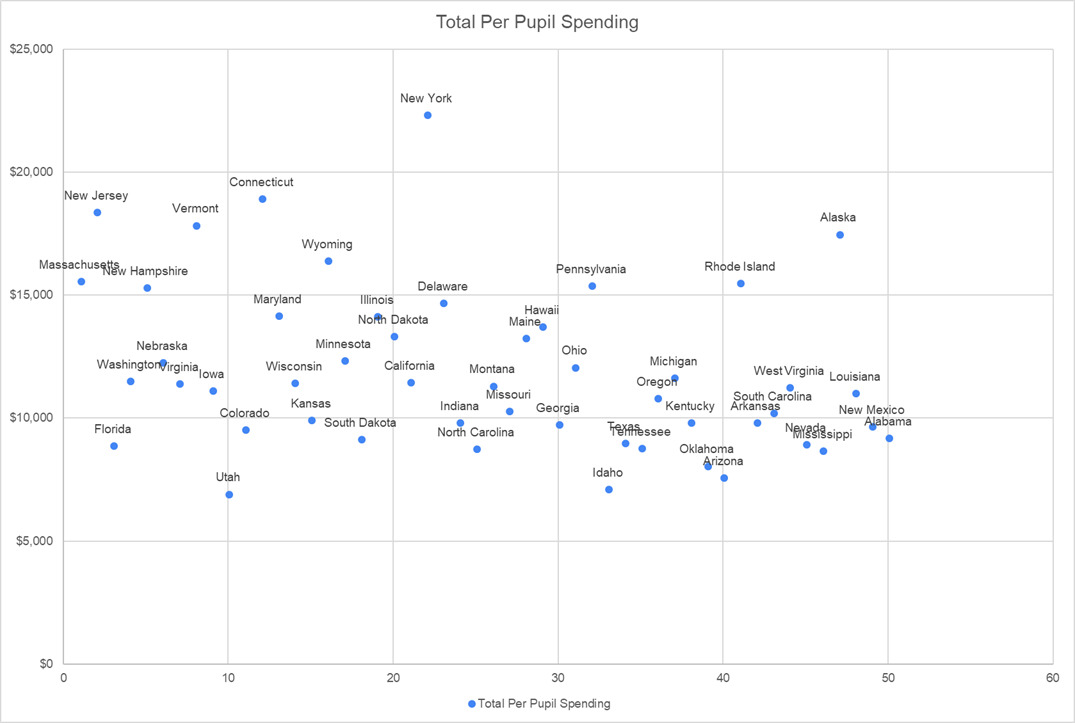 New Jersey, for example, spends $18,402 per student, and they are ranked an impressive 2nd on the list.  Alaska, spends a comparable $17,502 per student, and ranks 47th.  While there may be a broad downward trendline (less money ranks lower on the list), there are far too many outliers to say that Dollars per Pupil correlates to, much less causes, positive educational results.

What Booker gets right is his diagnosis that the Democratic party is beholden to the public school system, saying that there is a “false choice between supporting public-school teachers and giving parents options for their kids”.  This is because teachers unions donate millions of dollars ($32 million in the 2016 election cycle alone) to Democrats.  Democrats throughout the country are elected on the contributions of the teachers unions.

This is where Booker gets his solution wrong.  He blames Republicans for the problems in the education system, and he lauds public schooling.  “[w]e have Republicans in Congress, the White House and state legislatures across the country making problems worse, undermining public education and attacking public-school teachers,” he says.  His solution is to make public charter schools a legitimate alternative to the current public school model.  He also calls for increased funding to public schools.

Booker, by demonizing the school choice alternatives of Republicans, is setting up his own proposal for a widespread failure.  While his proposal is a step in the right direction – give parents some choice in where their children go instead of no choice – he is still reliant on government oversight into the education system instead of letting the parents have more say.  While this may be effective in urban areas that have less parental involvement, this is not a broad solution to the nation’s educational problems.

What needs to happen is a broad political mandate that simply states that parents get to choose where their children go to school.  That may be the local public school, a charter school, a private school or a religious school.  The dollars per pupil that are allocated by each state should be given to the parents, not the school districts, and the parents should decide where those resources will be directed.  Nationwide, charter schools spend around 40% less per student than public schools.  Those excess funds could go into the public school system, just like the Democrats want.

Booker doesn’t want to provide true school choice, because that will hit the Democrats where they hurt the most, their wallets.  Rather, he’s throwing crumbs at the school choice advocates among Democratic primary voters, hoping they direct their support to his fledgling campaign.  That is hardly the education plan that the country needs and deserves.