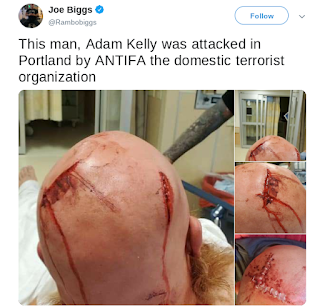 Over the weekend, conservative blogger Andy Ngo was attacked in Portland by Antifa activists.  Antifa has been on the warpath for the past few years, given cover by leftist politicians and media activists to continue their attacks on people they disagree with.  Antifa is a violent organization made up of radical left-wingers, and should be designated as a domestic terror group.
Andy Ngo, an editor at Quillete, was covering a Portland protest and a clash between the right-wing group “The Proud Boys” and Antifa.  Ngo, a Portland native, has extensively covered the actions of Antifa in Portland, which Mayor Ted Wheeler has treated with kid gloves.  Wheeler has not stepped in when Antifa took over downtown streets with Police watching back in October of 2018.  This emboldened Antifa, who showed up in force to protest a “Him Too” rally.  (“Him Too” is a movement against false rape allegations.)  According to videos and reports, Antifa threw trash cans, eggs, milkshakes with quick-dry cement, called police officers “pigs” and attacked innocent people, including Andy Ngo.  They used slingshots and crowbars when attacking these people, bringing their crimes to assault with deadly weapons.  They hide their faces so they can’t be identified later and arrested.
Other victims of Antifa violence this weekend were John Blum and Adam Kelly.  Blum was beaten with a crowbar, and Kelly’s head was split open, resulting in a concussion and requiring 25 stitches.

Antifa has multiple forms of attack.  They rioted in multiple cities on the day that Trump was inaugurated.  They’ve been caught trying to chain the doors closed during a university speech.  They handed out  a deadly weapon to an undercover journalist.  They chanted outside Tucker Carlson’s home and broke his door.  They are well versed in using violence to push their message.  Chains, slingshots, crowbars and knives are only the beginning.  A recent FBI Probe  is looking into Antifa’s attempts to buy guns from Mexican cartels.
Antifa has many defenders, both in the Media and the Democratic Party.  There are many blue-check marked journalists on twitter who piled onto Ngo after the attack, covering for Antifa’s violence.  CNN’s Chris Cuomo said in August 2018 that Antifa is “on the side of right” because they oppose hate.  NBC’s Chuck Todd gave a platform and a softball interview to Antifa back in 2017.  Former Deputy Chair of the DNC Keith Ellison tweeted a picture in support of Antifa and their tactics, which he later deleted.

Antifa is not made up of minority, poor activists who are attempting to free themselves from a racist and classist system.  They are made up of white liberals from middle class homes.  They do not speak for the poor, the racial minority, or the mainstream left (regardless of how many in those groups defend their actions).  They are spoiled white children who have become disturbingly comfortable engaging in terrorist activity.  In 2017, there was a petition for the White House to formerly recognize Antifa as a terrorist organization that has garnered over 350,000 signatures, which the White House rejected.  After the news of the weekend, a new petition has started, and already has 13,000 signatures.  In light of these recent attacks, it is necessary for the Trump administration to take another look at that designation.
Antifa IS a domestic terrorist organization.  They are organized, they have targets, and they attempt to facilitate change with violent methods.  They must be stopped.
Moshe Hill is a political journalist who has written for The Daily Wire, The Queens Jewish Link and The
Jewish Link of New Jersey.  He is regularly featured on ‘The Josh M Show’ podcast
Subscribe to aHillwithaview.com for more content from Moshe Hill.
Like him on Facebook at facebook.com/ahillwithaview and follow on Twitter @TheMoHill