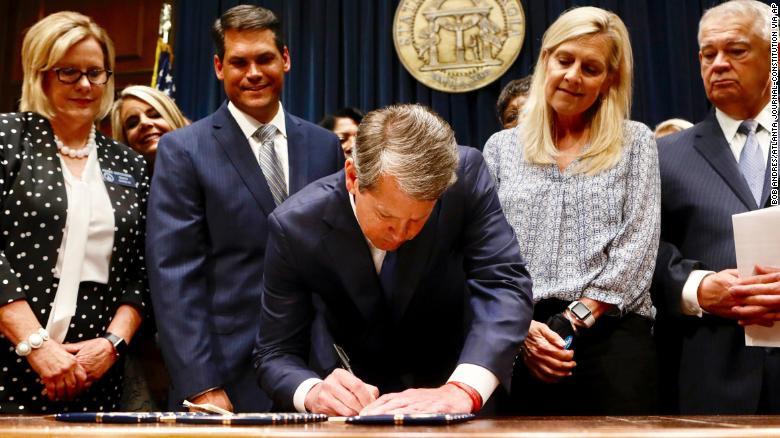 Unless you are a Congressional Democrat still trying to craft Trump’s silver bullet out of the Mueller Report, the big news over the weekend was Georgia’s Heartbeat Bill.  This bill made performing an abortion after a heartbeat is detected (usually around 6 weeks) illegal in the state of Georgia.  Advocates for abortion were predictably enraged, culminating in Alyssa Milano’s call for women to boycott sex with men until the law is changed.  However, if the progressives who are dressing in Handmaid’s Tale outfits and protesting outside the Georgia State House thought critically about their ideology, they might conclude that the pro-life position, or at least some abortion restrictions, are a progressive position.

Progressivism as an ideology has many meanings depending on the cause of the one defining it, but most simply it is a philosophy that advocates that advancements in science, technology, economic development and social organization must be utilized to constantly reform society in order to improve the human condition.  By this definition, nearly every political side is progressive.  However, there is a large segment of the left that defines themselves as a capital-‘P’ Progressive, and this segment defines progressivism as advocating for social justice.  Regarding the Progressive position on abortion, they must ignore the progress of science, technology, economic development and social organization.

Science, particularly medical science, has grown by leaps and bounds since 1973 (the year of Roe v. Wade).  That decision defined “viable” as “potentially able to live outside the mother’s womb, albeit with artificial aid,” which they made the third trimester (28 weeks).  In the 1992 Supreme Court Decision Planned Parenthood v. Casey, it was acknowledged the trimester rules didn’t mesh well with medical advances, and acknowledged that fetal viability was 23 or 24 weeks.  Statistically, 23 weeks has a 17% likelihood of survival, while at 24 weeks that rate jumps to 39%.  However, in 2017 a baby was born in Texas at 21 weeks, 4 days, and survived.  While that is clearly an aberration to the general rule of survival rates, it is clear scientific evidence that viability is possible at an earlier time than commonly accepted.

The medical progress of fetal viability is inconsequential to Progressives.  New York recently became the 8th state to allow abortions until day of birth, which is 40+ weeks.  Capital Women’s Services, a Washington, D.C. based abortion clinic advertises “Late-Term Abortion to 36 Weeks”.  Senate Democrats voted against the “Born-Alive Abortion Survivors Protection Act”, which would have mandated care for any baby that is born alive after a failed abortion, as opposed to “backing away” (a.k.a. leaving the baby to die on the table from lack of care).  If a baby is “born-alive”, it is obviously viable.

On top of medical science, medical technology is progressing at a rapid rate.  3-D Ultrasounds are commonplace and can detect abnormalities.  These detections lead to in-utero surgeries which increase the survival rate and quality of life of countless babies with spina bifida, heart defects, or other diseases.

Ultrasound technology is an impediment to Progressives.  The entire Progressive abortion narrative is predicated on the notion that this is the woman’s choice, and that the baby is just a cluster of cells.  As Christine Quinn, CNN Contributor and former New York City Council Speaker, said, “When a woman is pregnant, that is not a human being inside of her.”  States that create laws requiring abortion providers to perform an ultrasound is “unethical and demeaning” according to NARAL Pro-Choice America.  Ultrasounds are a problem for abortion providers, as up to 78% of women who see an ultrasound choose not to have the abortion.  Therefore, they lobby for ultrasounds to not be used, despite being needed when prepping for an abortion to know how to proceed surgically.

There’s also future innovation to consider.  Artificial womb technology recently had a breakthrough, which was published in the American Journal of Obstetrics & Gynecology.  “In the AJOG study,” says Associate Professor Matt Kemp, Head of WIRF’s Perinatal Research Laboratories and Local Chief Investigator, “we have proven the use of this technology to support, for the first time, extremely preterm lambs equivalent to 24 weeks of human gestation in a stable, growth-normal state for five days.  This result underscores the potential clinical application of this technology for extremely preterm infants born at the border of viability. In the world of artificial placenta technology, we have effectively broken the 4-minute mile.”  Technology like this changes the viability math, especially if the 21-week aberration becomes the new standard.

Abortionists are afraid of artificial womb technology.  As many have said since this science fiction started becoming a reality, this technology could completely upend the abortion debate.  If a baby can be transferred from a mother who doesn’t want it to an artificial womb, the abortion argument of “we cannot force women to be pregnant” falls away.   As Harvard Law Professor Glenn Cohen wrote at Vox, “Once we go beyond the burdens of gestation as the justification for abortion and instead turn to the psychological, financial, and social burdens of unwanted parenthood, the potential of adoption to reduce — but not completely eliminate — some of those burdens may become relevant.”  How many pro-choice supporters will fall away if the only reason for an abortion becomes “I don’t want my DNA to walk around”?

Economically, abortion is increasingly an issue for the poor.  While nationwide abortion rates dropped, percentage of abortions for women living below the poverty level rose from 30% in 1980 to 49% in 2014.  This is unsurprising, as 23% of respondents claim their reason for an abortion is “Can’t afford a baby”, 19% responded “done having children”, and 8% said “Don’t want to be a single mother”.  Those who are in stable homes with a steady income are not the ones who normally get abortions.  Many black and Hispanic communities fill the criteria of single mothers with unstable incomes, and this is why 79% of Planned Parenthoods abortion facilities are within a 2 mile walk of these neighborhoods.  Planned Parenthood, the nation’s largest abortion provider, specifically targets those below the poverty line.

While their defenders would claim that their choice of location is altruistic (poorer women can’t afford to travel far distances to abortion clinics), that altruism is negated by the fact that Planned Parenthood charges up to $950 for their abortions.  While there are free abortion clinics, Planned Parenthood’s website says that only those whose health insurance covers abortions can get a free abortion.  Meanwhile, Planned Parenthood, as a non-profit, is raking in $245 million in excess revenue over expenses.  They may claim that due to the law that federal funds cannot be used for abortion, and they receive $550 million in federal funds per year, they cannot legally give free abortions.  However, with their high profits and higher contributions due to their celebrity status ($630.8 million in 2017), there is no reason why taxpayers should have to foot their bills.  Meanwhile, they view Crisis Pregnancy Centers as the enemy.  CPC’s provide free ultrasounds, adoption services, and diapers and wipes to poor women, despite not receiving the $550 million in federal funding that Planned Parenthood receives.

Which leads to the social organization.  The pro-life movement have put their money and their time where their mouth is.  Crisis Pregnancy Centers have popped up around the country, with little funding.  6 in 10 offer free ultrasounds, 1 in 5 offer free STD testing.  24-7-365 hotlines have been set up, answering hundreds of thousands of calls a year.  Over 80,000 volunteers around the country worked 6.5 Million hours in 2016.  They do this all without any federal funding.  They heavily advocate adoption as a viable alternative to abortion, as there are literally millions of people in the United States looking to adopt, and many wait on lists for years.  While it is difficult to nail down exact numbers, estimates put 2 million couples waiting to adopt, or 1 child per 36 couples.

Crisis Pregnancy Centers are a target of the abortion supporting community.  NARAL calls the “fake health clinics”.  Jon Oliver ragged on them for 21 minutes on his HBO show.  The Journal of Ethics wrote “Why Crisis Pregnancy Centers Are Legal But Unethical”.  CPCs not only hurt the abortion industry’s bottom line, they are hurting their message, which is “if you don’t want a baby, you only have one option; abortion.”  They ignore that adoption is a viable social option which saves the life of the baby and provides that baby with a family structure.

All of this hinders the Progressive social justice agenda.  They must ignore the baby at all costs, because once the conversation changes focus, they lose support.  They keep the focus on abortion as solely a “women’s healthcare issue”, with the men in government trying to regulate women’s bodies.  Never mind that half of women describe themselves as pro-life, or that the leaders of the pro-life movement are women.  Never mind that government regulates individuals’ bodies in numerous ways already, like requirements to wear seat belts, recreational drug use, a mandate to buy health insurance, or suicide.  Each one of these can be debated on their own merits, but the precedent of government regulating what an individual is allowed to do with his/her own body exists.  That argument falls flat, however, if the focus is shifted from the pregnant woman to the life that she is carrying.

Women who grapple with this decision are facing one of the most consequential moments of their lives.  It is truly a terrible low point for any person to contemplate having to kill their own child because they are “not ready” or “can’t afford it”.  Pro-lifers look at that person and see someone they can help.  They try to prove through science that she is carrying a life, through technology how to save and protect that life, monetarily what options they have, and a social foundation that helps implement that option that helps the mother and the child.  The abortion industry sees someone they can exploit, because they are counting on decades old science and technology, a desperate woman who has money and no social backup.  The abortion movement, in short, is not a progressive movement, rather a capital-‘P’ Progressive movement, which is a different animal altogether.